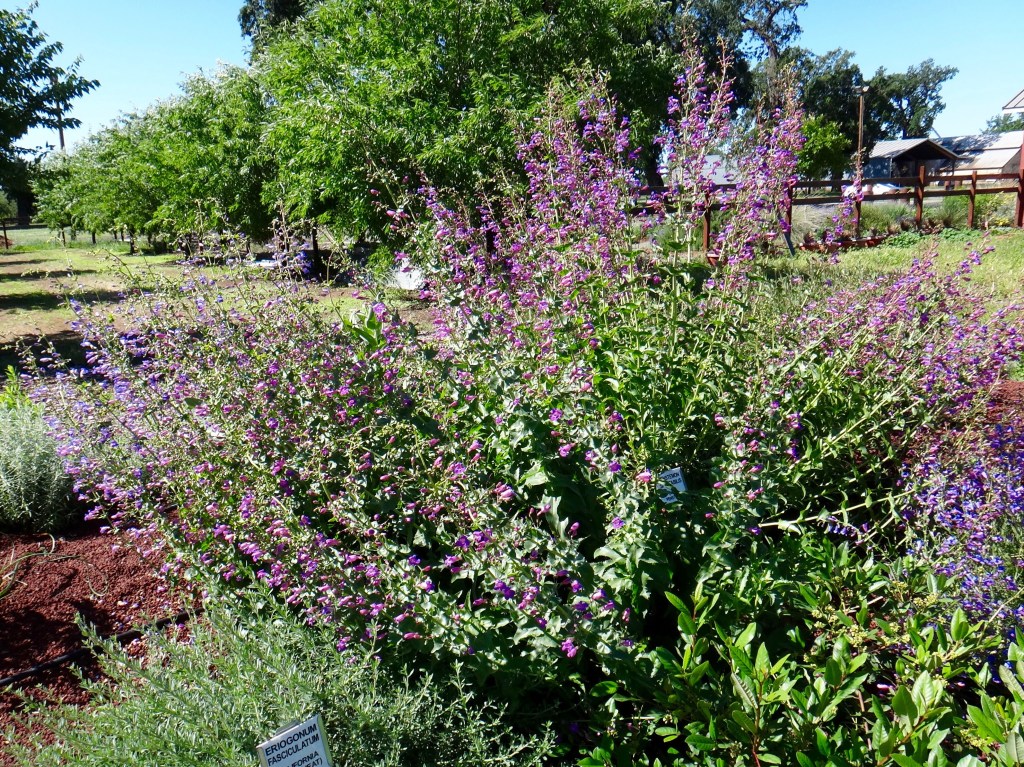 In keeping with the Patrick Ranch Museum’s mission to enhance “people’s understanding and appreciation of the rich agricultural heritage of our community”, a half-acre lot planted with heirloom almond varieties is located between the entrance to the museum and the master gardener’s demonstration garden. Joseph Connell, along with Susan Donahue (both of whom helped establish the Master Gardener program in our county), were the masterminds behind the orchard. The Real Dirt recently interviewed Connell about this tribute to the history of almond farming in Butte County.

real dirt: How did this project get started ? Who have you partnered with?

Joseph Connell: Susan Donohue (Retired Director of UC Cooperative Extension in Butte County and Patrick Ranch Museum Board Member) of Patrick Ranch expressed interest in featuring a historic almond orchard on the Ranch property . As an advisor to the UCCE almond tree, I agreed to work with them on the project. I used my contacts with almond growers and with the UC Davis Almond Variety Collection to locate budwood for each of the varieties. Budwood consists of short lengths of young branches with buds suitable for budding into a rootstock to create a tree of a particular variety. Nancy Fowler Johnson of Fowler Nursery (a fruit tree nursery in Newcastlelifornia) has agreed to support the project by propagating and donating enough trees of each of the varieties I have included in the demonstration orchard.

DR: How and why did you choose the varieties you planted?

JC: I have selected varieties that were most popular in the almond industry before 1900. The varieties planted here represent the fundamental introduction period of the California almond industry from 1850 to 1900. The first plantings were varieties such as Languedoc from the province of the same name in southern France. Languedoc originally produced poorly due to a lack of understanding of the need for cross-pollination. The other varieties in this historic orchard were selected by early agricultural pioneers from seedlings planted in California. They became the foundation of California’s almond industry. Nonpareil remains the leading variety in the California almond industry, accounting for 39% of the total acreage in 2021. It is also the most valuable nut in terms of dollars per pound returned to the grower. Breeders have been trying to match its quality for decades and have yet to succeed. The Peerless variety and a few others still have a small residual acreage in a few commercial orchards, although improved varieties are common in orchards today.

DR: Was the stock hard to find?

JC: The trees were either available directly from the nursery, propagated by the nursery with buds from the UC Davis collection, or in the case of the Bidwell variety, from a local grower, Randy Meline, who had maintained a tree of this selection Bidwell Ranch. I believe the nursery attempted to propagate ten trees of each variety. They delivered enough trees to plant the orchard with five trees of each variety. The three eastern rows were planted with four trees each.

DR: Have all the original trees survived?

JC: A Peerless tree at the south end of the Patrick Ranch row died from gopher damage and a new Peerless tree was replanted several years ago on the Lovell peach rootstock by Nick Bertagna (a farmer third-generation Butte County, as well as the retired UCCE 4-H program representative.)

DR: When were the trees planted? How far and why?

JC: Susan and I talked about moving the project forward in 2009. I located buds and lined up the nursery as a cooperating partner, and the nursery propagated the trees in the spring of 2010. The trees were crested on a rack. hybrid peach/almond graft “Hansen 536”. , which is the most drought tolerant of the rootstocks currently available. This rootstock has characteristics similar to the almond rootstock which would have been used before 1900. Bare-rooted trees were dug up from the nursery the following winter and, as a demonstration orchard, the block of a half -acre was planted February 21, 2011 for a single row of each variety. Early flowering varieties are planted mainly west of Nonpareil and late flowering varieties are planted at the eastern end. The trees were planted in north-south rows so that visitors could walk along the north end of the rows and view each of the varieties. A relatively wide square planting of 25 feet (70 trees/acre) was used because the hybrid peach/almond rootstock will produce large trees similar to those of almond rootstocks (current commercial orchards in the Sacramento Valley are often planted at around 130 trees/acre on hybrid peach/plum rootstock).

DR: What is the expected “life” of this orchard?

JC: I would expect it to have a lifespan of at least 30-40 years. He could be there much longer; Patrick Ranch’s plan is to keep it for a very long time.

DR: What are the maintenance goals/requirements for these trees? Harvest goals?

JC: First year tree training was done by me and early pruning/training and thinning of some crowded branches was done by Nick Bertagna. Since this is not a commercial orchard, it is expected that there will be minimal fertilizing and spraying and not much maintenance required.

The Patrick Ranch had hoped to be able to harvest nuts and eventually sell them in their store or at public events as heirloom varieties. Unfortunately, ground squirrels living happily in the adjacent oak grove did most of the harvesting.. . This year, severe frost during flowering resulted in very light fruit set.

DR: What can we learn from this project?

JC: The half-acre orchard is primarily there to showcase one of the first crops grown in the Chico area and to preserve old varieties. Butte County was the #1 county in almond production in the middle of the last century. It was the fourth largest almond producing county as recently as 1980. However, Butte County currently only accounts for about 3% of the state’s almond production due to vast expansion of almond acreage in the San Joaquin Valley.

DR: Will there be (will there have been) demonstrations of maintenance, harvesting, etc. for the public?

JC: There have been no such demonstrations for the public so far. Harvesting was historically done using tarps, an almond maul and bamboo poles to knock the nuts off the trees. A harvesting demonstration could be presented if ever the squirrels leave nuts to harvest!

DR: Thanks to Connell, Donahue and all others involved in creating this living testimony to the importance of almond farming in the history of Butte County and its current local economy.

The UC Butte County Master Gardeners are part of the University of California Cooperative Extension System, serving our community in a variety of ways, including 4-H, agricultural counselors, and nutrition and health programs. ‘physical activity. To learn more about the UCCE Butte County Master Gardeners and for help with gardening in our area, visit https://ucanr.edu/sites/bcmg/. If you have a gardening question or problem, call the hotline at 538-7201 or email [email protected]

Specific varieties planted at Patrick Ranch, the year they were introduced into California production, and their source of origin include:

Current stats as of 2021: Nonpareil, the state’s leading variety, has 387,777 standing acres; Drake, 116 acres; Ne Plus Ultra, 1,300 acres; Peerless, (a few acres are still planted each year) 3,703 acres; while Bidwell, IXL and Languedoc are no longer listed by name in the 2021 Almond Acreage Report and may have passed into history.

Download the syllabus by subject for the annual evaluation