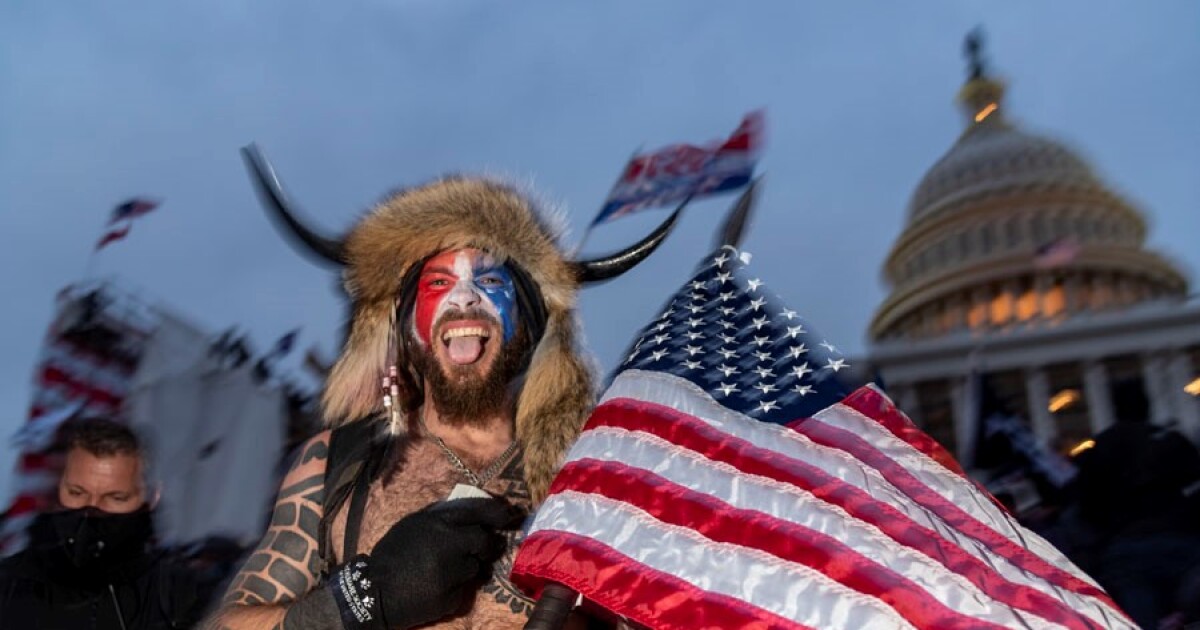 Watkins portrayed “Shaman QAnon,” Jacob Chansley, the man in the horned helmet from Arizona who had become the epitome of the January 6, 2021 insurgency. Watkins himself had become a familiar face on the circuit. cable television, accusing President Trump of paving the way for vulnerable Americans to storm Capitol Hill.

But in expletive comments to Talking Points Memo last May, Watkins went further.

“These are people with brain damage,” he said, also calling the crowd “people on the short bus” and people “on the spectrum,” among other less apt phrases. “But these are our brothers, our sisters, our neighbors, our colleagues – they are part of our country. They are not bad people, they do not have a criminal history. [F—], they were subjected to more than four years of [g——] propaganda like the world has not seen since [f—-] Hitler.”

The backlash was almost immediate. Advocates for people with disabilities condemned his comments. Other lawyers were quick to distance themselves from their own clients.

But on Thursday Saint Louis on the airWatkins insisted he knew exactly what he was doing. He said he tried everything behind the scenes and in court to get mental health treatment for his client. He said Chansley had serious problems, diagnosed more than a decade earlier, during his military service. Yet no one pursuing his case or detaining him in prison wanted to approach them.

“All it took was a carefully crafted, vulgar and inappropriate quote, well placed for maximum disclosure, to get the mental health care my client needed within 24 hours, a psychological assessment ordered by court and immediate action to save my client from the proverbial mental abyss, ”he said.

Listen to Al Watkins on St. Louis on the Air

But as St. Louis reporters have grown accustomed to Watkins’ penchant for saying scandalous (and even offensive) things about the record, his portrayal of Chansley has given many domestic reporters a first glimpse of his style. And they still had to think about the question that the inhabitants of Saint-Louis have been asking themselves for years: does its listing serve its customers? Or does it just raise Al Watkins’ profile?

Watkins insisted it was the first. He also refused to disown the comments that put him in hot water.

“For the people with mental health vulnerabilities that were involved on January 6, and there are many, they need compassion. They need patience, ”he said. “And I’m not armed to give it to him. I am a lawyer. But I can plead for compassion. And I can plead for patience.

He added: “Once it became clear what I was doing and the diagnosis of [Chansley] was reconfirmed in 2021, and once the explanation for the basis of this operation came out, I garnered remarkable support from the very people who wanted to tie me up through my lower regions.

Guided by Watkins, Chansley pleaded guilty and was ultimately sentenced to 41 months in prison and was also credited for the 10 months he had already served. Chansley has since hired a new lawyer, who has appealed his sentence, citing an ineffective lawyer.

Watkins also claimed he ran most of his business away from the public eye – but argued he was happy to be happy when the situation warrants it.

“When they see high-profile stuff, people think, ‘Oh, he’s somebody just trying to get attention.’ No, there is a method behind the madness. And this is the exception, not the rule.

More than 725 people were the subject of criminal charges for their conduct on January 6. Watkins continues to believe that most deserve compassion. Besides mental health issues, he cited the stress of the pandemic, the role of social media and, yes, President Trump.

“They have been invited,” he said. “They really believe they were there at a special time, calling their president, they’re here to save our nation, help our president save our country. And we have to realize that these are our neighbors, they are friends, coworkers or coworkers, sometimes our parents, and without all this collective combination of triggers, they wouldn’t be here.

“Saint Louis on the air”Brings you the stories of Saint-Louis and the people who live, work and create in our region. The show is hosted by Sarah fenske and produced by Alex heuer, Emily woodbury, Evie hemphill, Lara hamdan and Kayla drake. Jane Mather-Glass is our production assistant. The sound engineer is Aaron Doerr.