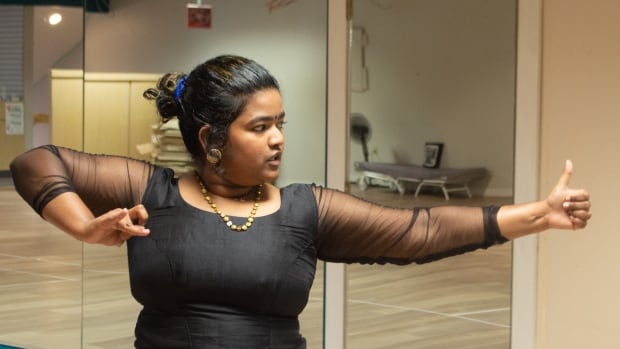 Bharatanatyam – it is an ancient classical Indian dance form that is as ingrained in Indian culture as ballet is in the West. It originated in southern India as a worship item in Hindu temples.

But despite its importance in Indian culture, having the opportunity to learn this special dance form has been a forbidden teenage dream for some girls in India.

Aparna Roy Kollannur was raised Catholic, one of the largest religious minorities in her home state of Kerala.

“My dad is very religious,” she said.

Kerala is close to the birthplace of Bharatanatyam and as such the dance form is an important part of the culture of the region.

Roy Kollannur said that while “everyone” around her learned Bharatanatyam when she was growing up, her family wouldn’t let her learn the dance largely because of her religious associations.

“I wanted to do like a bachelor’s degree in Bharatanatyam, then a master’s degree, and then do research on that, and stuff like that. But my parents wouldn’t let me do that,” Roy Kollannur said.

“It’s not like a profession that is in the social setting in India.”

Nonetheless, she returned to her “first love” later in life, training under two gurus in India and learning both dance theory and practice.

This is my way of reforming the societal vision and societal structure.-Aparna Roy Kollannur

Now Roy Kollannur is sharing his passion for Bharatanatyam with the islanders.

She came to Prince Edward Island a few years ago as a student.

And this month, she began giving weekly Bharatanatyam classes to children and adults at the nonprofit DownStreet Dance studio in Charlottetown.

“Aparna actually approached us and wanted to teach their class in a supportive environment, so we said yes, absolutely,” said Laura Weatherbie, chair of DownStreet’s board of directors.

“We’re excited to support anyone who wants to teach people a little about their culture.”

“A form of expression and communication”

Selvi Roy is one of Roy Kollannur’s students.

“I’ve been here for about 10 years and I’ve talked to people who have been here for over 60 years. And they all said the same thing: ‘No one has taught Bharatanatyam here in PEI. -E.'” she said.

“We’ve had people who know the dance, who learned the dance and graduated and perform on different stages… But what Aparna brings to PEI right now, I doubt. that we ever had.”

Like Roy Kollannur, Selvi Roy also grew up in India, and her desire to learn Bharatanatyam was also quashed at an early age.

She said some of her classmates expressed similar motivations for learning dance: they didn’t have the opportunity to when they were younger.

“It was contrary to the spirit of the working class of the time, if you will, that children learn to work more than to dance.”

Roy’s family was also Catholic. She said that growing up she had to be very discreet when the subject of Bharatanatyam was brought up, and rarely had the opportunity to watch performances on television.

She only attended two dance concerts. She went there with friends and never said a word to her parents.

There is a little teenager somewhere deep inside me who wants to learn dance and be able to express himself freely.—Selvi Roy

“Part of me might want to say to my dad, ‘Well, I have a chance to dance now.’ So maybe there’s, there’s a little teenager somewhere deep inside me who wants to learn dance and be able to express himself freely,” Roy said.

“There is a very small element of rebellion there. But it is above all a form of expression and communication. It is a communion of the body with the spirit in itself. It is, for me, the essence dance. .”

Bharatanatyam has its roots in an ancient treatise on the arts called the Natya Shastra and for most of its history was performed exclusively in Hindu temples by women.

The dance is usually accompanied by music in a South Indian style with traditional instruments and lyrics related to Hindu mythology.

Roy said that because the dancers represent the divine, they normally wear their “best attire”: colorful hand-woven silks, lots of brightly colored jewelry and lots of ornaments, all of which have symbolic meaning.

The dance itself is no less symbolic.

“It became a form of narration of the ancient scriptures that were there,” Roy said.

“The movement goes from slow to fast and from fast to slow according to the story that is told, … [the beat] shifts to a higher frequency when you may be telling stories of battle, rage… But when loving emotions are expressed, the cadence will be softer or slower.

Roy said that in addition to excellent footwork, dancing requires a lot of coordination between body, hands and even fingers and eyes. This is because the dance is based on a series of gestures that can take years to master, all with a certain meaning.

“[You’re] communicate a story to the audience, with music, with expressions with footwork with manual labor,” said Roy Kollannur.

“If you want to transmit something, you can do it through Bharatanatyam.”

Roy Kollannur said she tries to teach her students the basics of dance. But she is not a traditionalist.

She said that in her humble way she was trying to demystify the dance for everyday people, trying to focus less on the religious aspect of Bharatanatyam and more on its ability to tell different kinds of stories.

“It’s not for people from a certain country, or anything else. It’s for everyone,” she said. “I wouldn’t call it a rebellion. But I would say [Bharatanatyam] is my way of reforming the societal vision and societal structure.”

“It’s about building community across cultural barriers, isn’t it? Instead of creating them.”

Roy Kollannur said dancing helped her survive very dark times in her life related to her personal struggles with anxiety and depression.

She said she has tried many dance styles, from reggae and afrobeat to zumba and Bollywood-style dancing. But no one connects with it the way Bharatanatyam does.

“It also gives me a lot of positivity and a lot of confidence because it’s something I’ve wanted to do all my life. And I’m finally doing it,” she said.

Roy Kollannur said her family is now more supportive of her as they know she still hasn’t lost her passion for dancing. Now his goal is to generate that same passion in others.

“I had a lot of dreams about dancing and teaching dance,” she said.

“My family kind of let me down or didn’t let me, but now that I’m here I have so many opportunities. I can do something new and I can introduce Bharatanatyam to others. people.”

2023: Atiku challenges Tinubu to submit for long hours of interview