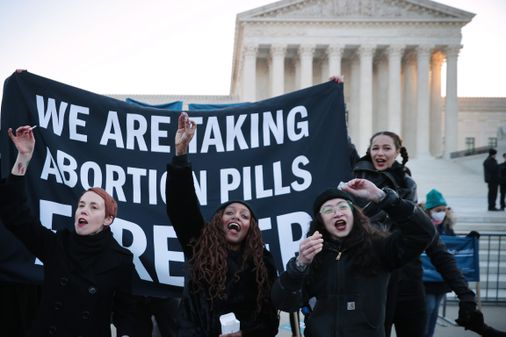 “We are surely going to see an even greater increase in the abortion lobby trying to promote this method of chemical abortion,” said Prudence Robertson, communications associate at Susan B. Anthony List, a health advocacy network. abortion. “We know this is the next frontier for them, so we’re doing everything we can to encourage states to take action.”

Medical abortion refers to a two-step procedure protocol of prescriptions that can be taken to terminate a pregnancy up to 10 weeks of pregnancy. The first, called mifepristone, blocks the hormone progesterone, which is needed to continue pregnancy. Then misoprostol, taken 24-48 hours later, causes cramping and effectively induces miscarriage.

Medical abortions were already on the rise, accounting for nearly 40% of abortions in the United States in 2017, according to the most recent data from the Guttmacher Institute, a think tank that supports the right to abortion.

“The overall abortion rate has continued to decline in our country, but the percentage of medical abortions is increasing compared to procedural abortions,” said Dr. Nisha Verma, fellow of the American College of Obstetricians and Gynecologists, who has called to lift restrictions on abortion drugs.

In Massachusetts, after years of steady increase, medical abortions became the most common method in 2019. Last year, 47% of the 16,452 abortions in Massachusetts were performed with a prescription.

The FDA first approved mifepristone in 2000, but until recently the pills were very restricted. Even if the drug is taken at home, the FDA has required that it be dispensed in person at clinics — rather than mailed, sold at pharmacies, or ordered online — from specially certified vendors and obtain the drug. directly from a distributor.

“That’s not what doctors usually do. They usually send you to a pharmacy to get a prescription,” said Elisa Wells, co-founder and co-director of Plan C, a campaign to promote abortion drugs. “It was enough of a barrier that many GPs who could have prescribed it didn’t.”

Campaigners have long called for easier access, pointing to data showing the drugs are safe. But the FDA concluded restrictions were needed to ensure safety as recently as 2016.

The pandemic has changed that reckoning. Faced with a public health emergency that could make in-person dispensing risky, the American Civil Liberties Union challenged the requirements on behalf of the American College of Obstetricians and Gynecologists. After a back-and-forth in court — in which the Supreme Court overturned a lower court ruling and allowed the Trump administration to reinstate the requirement — the FDA under President Biden suspended the requirement distribution in person for the duration of the pandemic.

Clinicians and telemedicine providers who could consult with patients throughout the process had prepared for the change.

“We were working with telehealth groups saying, ‘Why don’t you prepare?’ “said Wells. “If there was ever a reason to send pills, this is it.”

What followed was an explosion of access to medical abortion by mail and telehealth, bolstered by to research affirming the safety of the method and calling for its wider use.

“That’s exactly what’s happening entirely above board, completely legally, in accordance with all laws and regulations,” Wells said.

“These pills are so safe and effective that they really could be provided without a prescription and in many countries these pills are available from pharmacies,” Wells added.

Abortion opponents, however, dispute the drug’s safety, suggesting that abortion providers minimize risk and endanger women who might use the first-trimester drug inappropriately.

“Women will seek them out regardless of their stage of pregnancy,” Robertson said. “They are endangered every day.”

But specialists and medical organizations said research increasingly shows the method is safe. Patients are advised against medical abortions if they have an ectopic pregnancy – a pregnancy outside the womb – as well as if they have adrenal problems and bleeding problems.

The process causes cramping and heavy bleeding, and very heavy bleeding may require surgery, the FDA notes. Other side effects include nausea, weakness, fever, and chills and dizziness. In 18 years of use, the The FDA has recorded 24 deaths possibly related to mifepristone – two of which were due to ectopic pregnancies.

The FDA is expected to announce by Dec. 16 whether it will permanently drop the pre-pandemic requirement that abortion orders must be dispensed in person; if so, the decision will likely spur more states to take action against the practice.

“We anticipate that more states will seek to limit access to medical abortions due to what is expected of the FDA and the potential for the United States Supreme Court to weaken or override medical rights. abortion,” said Elizabeth Nash, state policy analyst for the Guttmacher Institute. .

In addition to Texas, the states of Arizona, Arkansas, Montana, Oklahoma and South Dakota have taken steps to ban the mailing of abortion pills, Nash said.

Other states — Alabama, Wyoming, West Virginia and Iowa — have begun taking steps to try to ban medical abortion altogether over the past year, Nash said.

It is unclear how states would enforce these bans. An international group called Access to aid already provides medical abortion pills online and has defied FDA warnings to stop. Aid Access even offers the pills in advance, allowing patients to obtain the drugs before a possible ban.

With online access to abortion medication, a patient can seek treatment, answer relevant medical questions, and consult with a provider at any time. Abortion pills arrive in the mail within three days, some providers promise, and patients have access to a specialist throughout the telehealth procedure.

“You don’t have to go through protesters, find daycare, take time off work,” said Kirsten Moore, director of the EMAA project, which advocates for medical abortions.

This convenience is worrisome for those who oppose abortion and who see drugs as creating an endgame around legal barriers.

“I think there is definitely a danger that it will be misused on a black market or that mifepristone will end up in hands where it was not originally intended,” said Tessa Longbons, partner at principal research at the Charlotte Lozier Institute, which opposes abortion. .