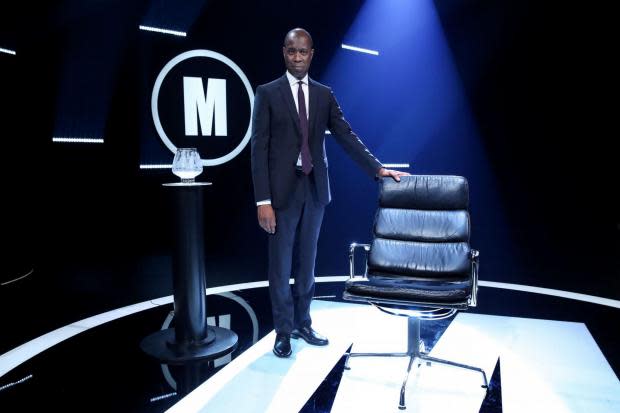 WHAT would be your specialized topic on Mastermind? It’s a question I’ve pondered for a long time and pondered again in recent days since the BBC revealed details of the new Celebrity Mastermind series, which begins next weekend.

An eclectic and joyous list of topics awaits, from Olympic silver medalist Roger Black laying bare his knowledge of the 1987 cult film The Princess Bride, to presenter Anne Diamond presenting her expertise on the birth of Britain’s radar.

Wise Agony Aunt Maria McErlane will delve into the history of women on bicycles and Bargain Hunt antiquities expert Roo Irvine is about to reveal his mastery of purebred cat breeds.

Then there will be Emmerdale actress Anna Nightingale on the music of Oasis; comedian and ventriloquist Nina Conti on Stephen King short stories; and singer Amelle Berrabah, formerly of pop group the Sugababes, on exploring Mars.

Who knew that Handforth Parish Council’s Jackie Weaver and the infamous Zoom Call Ruckus was a huge sci-fi fan? His specialty: The Chronicles of Riddick film franchise.

You can tell a lot about a person from what they choose to divulge when they settle into that big black chair and face quick cooking by TV legends such as Magnus Magnusson, Peter Snow, Clive Anderson, John Humphrys or, in the show’s latest incarnation, Clive Myrie.

Some applicants are modestly smart and adorable, others are irritating or too cool for school. You can always tell which would be fun at parties. Choosing a specialized subject is like the window to the soul.

Niche eras and obscure subjects rarely cease to delight. I have a colleague who says he’d be plump for Marvel comics 1963-1978 and another who feels he could excel on the subject of Berlin’s East German Motorcycle Museum 1949-1990. Both decent screams.

As for me? It would probably be one of the following: the complete works of Jilly Cooper, Marian Keyes or Thomas Hardy; artistic gymnastics at the 1992 Olympics; the Spice Girls back catalogue; the tumultuous solo careers of the Spice Girls; or the story of the Queen Elizabeth 2 ocean liner built by Clyde.

READ MORE: Susan Swarbrick: Am I getting grumpy or is everyone else really boring?

Other topics I could do a decent hit on would be John Hughes films from 1983-1990, classic mondegreens (i.e. misheard song lyrics), and the wives of Henry VIII.

There was a time in my teenage years when I could have been lyrical about anything Tom Cruise, but aside from a few random lines from Top Gun (“Maverick, there’s a MiG on your tail!”) and Cocktail (“Champagne – the perfume goes in, the sewers come out…”), the relevant details have unfortunately faded over time.

READ MORE: Susan Swarbrick: Do you suffer from Covid hypochondria?

Perhaps the most enlightening part of this exercise is realizing how well I know certain things, while also making me aware of the myriad of topics that I have only scratched the surface of. It’s time for a new project. Adventures in tide tables and beachcombing here I am.

Our columns are a platform for writers to voice their opinions. They do not necessarily represent the views of The Herald