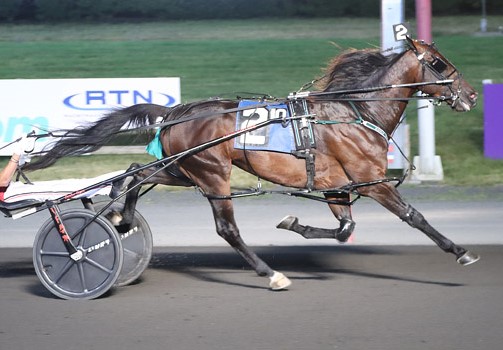 EAST RUTHERFORD, NJ – The four year old shadow theater-BJ’s Squall Harness Racing Stallion, Bulldog Hanover, proved to be the top dog in the aged pacing ranks by doing most of the work up front to record a stakes record and a track and a world record tying 1:46 mile in the $99,500 two-division second for the Roll With Joe on Saturday, July 2 at The Meadowlands.

Allywag Hanover scrambled to lead a :26.2 first quarter while Bulldog Hanover, scraping the pylon pole, settled for the pocket. But driver Dexter Dunn had plenty of traction in his hands at the back and quickly circled Bulldog Hanover to take the lead before a 53.4 half. From there the peloton gave a futile chase as they clicked three quarters in 1:20.2 and brought home the best Allywag Hanover by 1-3/4 lengths with the second-fastest finisher close, Abuckabett Hanover, well behind in third.

“[Dexter] was kind of speechless,” coach Noel Daley said after the race. “Jack [Darling] says the same thing, [Bulldog Hanover] was quite special; it’s so easy. [Dexter] says it took half a mile to pull it tonight too.

Noel Daley oversees the pupil developed by Jack Darling, which Darling co-owns through his Jack Darling Stables Ltd. with Brad Grant, during his residency in New Jersey. By taking his 19e winning out of 27 starts not only raised his tally to $919,520, but he also became the third horse in harness racing history to post a 1:46 mile. Always B Miki became the first at The Red Mile in 2016 and Lather Up the second at The Meadowlands in 2019.

“We take no credit – we got it 48 hours before his first start,” Daley said. “We’re just checking it out, that’s all; we did nothing with him. He barely trains, but they don’t need it when they’re going so fast.

Fresh off a 24.4 last-quarter chase against Bulldog Hanover in the Graduate Series, Rockyroad Hanover (Traitor Captain-Romantic Moment) got a second tow behind Charlie May and snatched cover to claim a 1:46.2 victory in the $98,000 Premier Division for the Roll With Joe.

Receiving a late game until a 6-5 favoritism, Rockyroad Hanover soared from the wings to run fifth as Workin Ona Mystery took the lead for a first quarter: 26 with Splash Brother sitting in the pocket . Charlie May, the 7-5 second pick, patiently sat in fourth before committing to run first after a :53.3 half, giving Rockyroad Hanover a wake to follow.

Charlie May walked to tie Workin Ona Mystery by three quarters in 1:20.4 and quickly took the lead as Todd McCarthy edged past Rockyroad Hanover to the open racetrack. In a few strides, the four-year-old stallion accelerated flawlessly to win as he pulled away 2 3/4 lengths from Charlie May in the stakes record mile, which beats the mark of 1:47.2 set by the Treasurer of the state in 2015. Workin Ona Mystery finished third and Nicholas Beach took fourth.

“I felt like I had a lot of horsepower; I knew it would be a really big mile,” McCarthy said after the race. “[Charlie May]He’s a very tough horse to pass, but my guy had a lot of sprint left in the stretch, so he finished really strong.

Rockyroad Hanover notched its eighth win in 31 starts and pushed its career bankroll to $679,572. Tony Alagna conditions the stallion for owner M3 Racing Stable. He paid $4.60 to win.

For more on Alrajah One IT’s surprise win at the Crawford Farms Open, Click here.

For more on Racine Bell’s victory in the Perfect Sting Stakes, Click here.

KEEPING THE RHYTHM: Meadowlands Pace-eligible Frozen Hanover won the first race on the map – for 2 non-winners – in 1:50 for trainer Luc Blais and is likely to be seen in the eliminations for the 3-class classic years of $700,000 (est.) next week. … I Did It Myway is apparently ready for The Pace playoffs. The Tony Alagna trainee won a high-end conditioning event as a 9-5 favorite in a record 1:48.1. His stablemate, Caviart Camden, is also expected to race in The Pace. He finished third after challenging the eventual winner before falling back and advancing well to the finish. .. Pace eliminations will be drawn on Tuesday.

SLIDE ME FIVE: Dexter Dunn drove five winners on the card in what was yet another big night for the three-time United States Harness Writers Association Driver of the Year Defender of the Year.

by Ray Cotolo, for The Meadowlands, with files by Dave Little