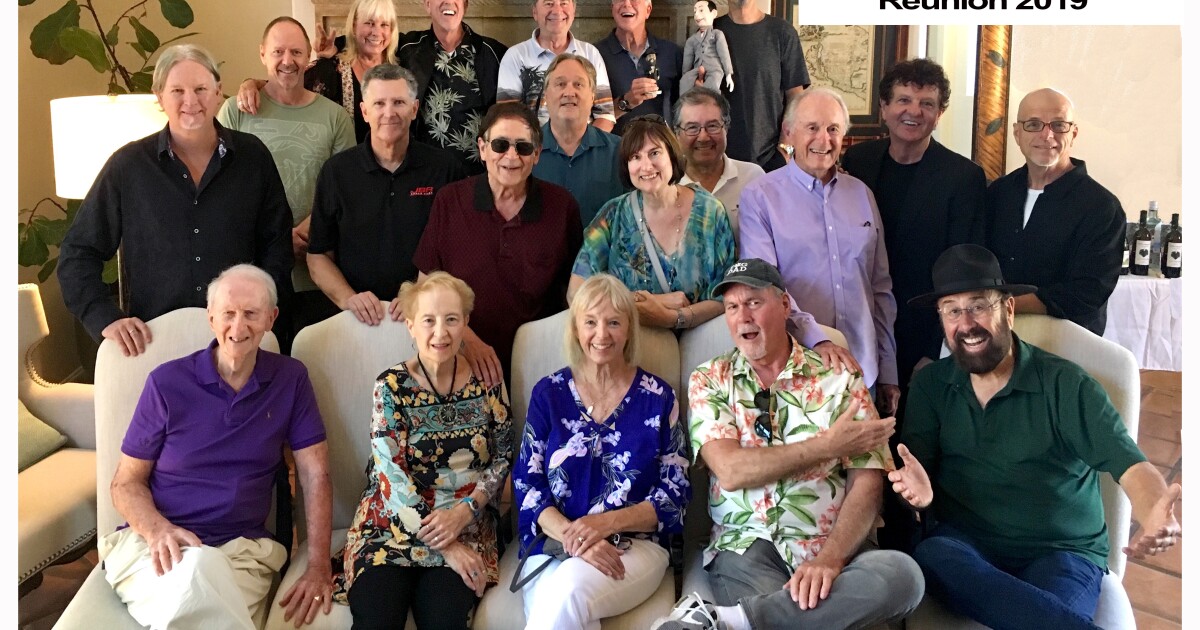 Technically, Raul Sandelin grew up in El Cajon. He attended elementary, middle and high school there, graduating from Grossmont High in 1981. And before going to the University of California, San Diego, he went to Grossmont College, where he is now an English teacher.

But in many ways that really matter, Sandelin was elevated by KGB-FM.

The San Diego rock radio station that gave us the San Diego Chicken, the KGB Sky Show, and the local “Homegrown” music albums gave Sandelin the soundtrack of his good times, his bad times, and everything the rest.

And now he’s giving the KGB everything he’s got.

Sandelin is the director, writer and co-producer of “KGB and the FM Radio Revolution,” a five-part documentary series that airs Monday at the Central Library in downtown San Diego beginning Monday, June 13.

Sandelin and fellow filmmaker Tony Butler — who serves as the series’ cinematographer, editor and co-producer — began working on the project four years ago. For Sandelin, however, it’s been a labor of love that’s been going on for decades.

“Without the internet — and without too much rock ‘n’ roll on TV because MTV didn’t exist yet — radio is where you go for your music news and concert updates,” said the 59-year-old filmmaker who has always lived in El Cajon.

“If you were a kid trying to be counter-cultural and not watch your parents’ news station, KBG was that. It was the cool older brother who had the latest albums and concert tickets and the latest scoop on everything. The KGB was the source of almost everything we cared about. That’s what a radio station like the KGB was like back then.

The station formerly known as KGB/1360 AM began its journey to dominance in 1972. It was the year the KGB rose to 101.5 on the FM dial, and late broadcasting legend Ron Jacobs was brought in to bring her out of her past Boss Radio poppy and into the world of free-form radio.

Jacobs’ genius was in making the most of the free-form vibe – young counterculture DJs instead of fast-talking “boss jocks”, deep album tracks on top 40 hits – and master it just enough that listeners aren’t subjected to passed out disc jockeys and Captain Beefheart album sides. The station’s AOR (Album Oriented Rock) format sounded different, and so did.

And boy, did it work.

After Jacobs’ arrival, KGB-FM became one of San Diego’s most successful radio stations. It won Station of the Year honors from Billboard magazine in 1974, followed by Rolling Stone in 1991.

For Sandelin, being on the receiving end of the KGB signal was also very exciting. It’s the first place he heard AC/DC, the Scorpions and the Sex Pistols. It was where rock stars stopped to chat before their local gigs. And it was where an El Cajon kid who loved Ted Nugent and the Firesign Theater could always call home.

So when former KGB DJ Gabriel Wisdom invited Sandelin and Butler to his Rancho Santa Fe for the 2018 edition of his annual KGB alumni reunion brunch, the filmmaker friends — who already had three rock-centric documentaries to their credit – showed up with a camera.

Early interviews with Wisdom, Cookie “Chainsaw” Randolph and other KGB veterans were so good they decided to do more. And with each interviewee leading them to another interviewee, and each packet of photos being followed by multiple packets of photos and memories, the project that they thought was a 90-minute film became a two-hour film.

And when movie theaters began closing during the COVID-19 pandemic, Sandelin and Butler decided to turn their current movie into a documentary miniseries.

Four years after that reunion brunch, KGB is now the subject of a five-part deep dive into the station’s history, its people and its impact. Sandelin and Butler hope to get it entered into select film festivals and plan to pitch it to streaming services and other media.

The series delves into the morning shows and high profile KGB press crews; the technical challenges of running a radio station; and promotions such as the KGB Chicken (now the San Diego Chicken) and the “Homegrown” album series. The first of these influential albums featuring songs about San Diego by San Diego artists included liner notes by future Oscar winner Cameron Crowe, who also provided the documentary team with audio interviews and photos of time.

“We have been emulated on many fronts. The mascot, the ‘Homegrown’ albums, our local music show — we pioneered those things,” said Jim McInnes, interviewee on the series and longtime San Diego DJ, who was in the KGB from 1974 to 2002, then from 2016 to 2020.

“All the people who worked there were wonderful. We all hung out together and we could play almost anything we wanted. We were just the hip station. It was a real pleasure to be there. »

Even with five episodes to play with, the show’s biggest challenge might be showing today’s masses who stream, download and listen to satellite radio just how important a local terrestrial radio station could be. And with apologies to one of the best mascots in broadcasting history, it’s not chicken food.

“The impact of the KGB has been immense. They were playing the biggest bands in the world. They were breaking up bands like Tesla and the Black Crowes, which became huge. When the KGB added a song by an artist, the rest of the country followed,” said Coe Lewis, whose 33-year stint as a KGB DJ began in 1986.

“When you said you worked in the KGB, that really meant something.”

Downtown San Diego Central Library will screen all five installments of “KGB and the FM Radio Revolution” beginning June 13 as part of its “Picture This!” series. Visit sandiego.librarymarket.com for schedule.