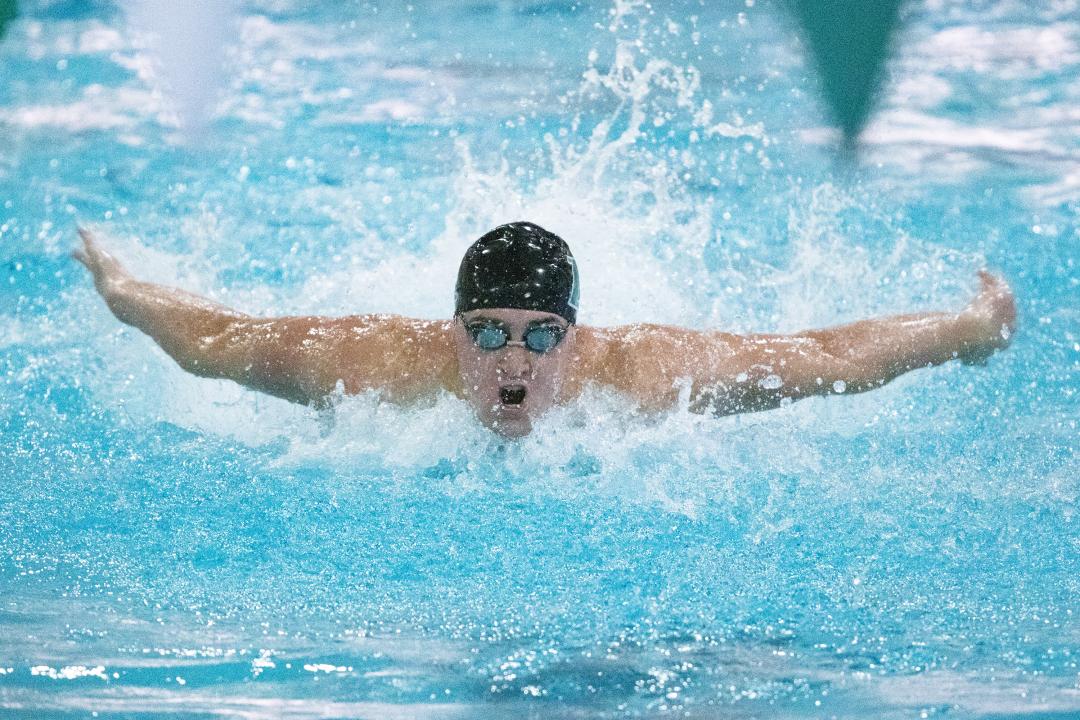 To cap off his Loyola career, Jimmy Hayburn won the Patriot League 200 Freestyle Relay and helped Loyola’s men finish fourth in the conference.

Jimmy Hayburn cheered and shouted at teammate Reid Hussey as he closed the final 10 yards of a 200m freestyle relay team heading for history on February 18. Hussey hit the wall at 1:19:05, sealing Loyola’s first Patriot League. relay title in the history of the school.

Hayburn, the eldest who chose to follow his sister to Loyola over offers from other schools for swimming and many others for lacrosse, left the program in better shape than when he entered it as a St. Mary’s (Md.) rookie in 2018.

“When I got there, we were sixth or seventh in conference,” he said. “We built this program into something special. I came away as a two-time conference champion and made the US Open. Now it’s passing the torch to the younger ones.

After finishing a successful swimming career that included a school record and a Patriot League title in the 50 freestyles, Hayburn had options for his next move. He had a job with Northrup Grumman that summer. He thought of a career in the military after participating in Loyola’s Army ROTC program – becoming the first Greyhounds athlete to compete in both track and field and ROTC.

But something about the butt always intrigued him. He received offers from several Division I schools and, given an extra year of eligibility thanks to COVID-19, he considered the possibility of picking up a stick for the first time in years.

In a world where lacrosse stars like Pat Spencer and Jared Bernhardt used extra eligibility to pursue other passions, Hayburn was fortunate to do the same. A chance encounter with Spencer – whose brother, Cam, he had befriended at Loyola – may have helped sway Hayburn.

“I was still in the middle of the decision process when I got to talk to Pat,” he said. “He was like, ‘You have the rest of your life to join the workforce and then you’re retired. You only have a few special years to really compete as an athlete.

Hayburn was not ready for the end of his college athletics career, and he wanted to leave another program better than he found it. After meeting Tom Gravante at Mount St. Mary’s (who had recruited him out of high school), he was sold for his future home.

The physically imposing former St. Mary’s (Md.) forward stood out on tape in 2018, and now he’s heading to Emmitsburg, Md., with four years of college track experience — just in the water and not in the field.

“It’s like coming back to a lost love,” he said. “I hadn’t done wall ball, batting and shooting in years. It was fun to get back to something I was lucky enough to be a part of. The draw with the Mount was there, and the philosophy of family values ​​is something I can relate to.

It’s no surprise that Hayburn was originally recruited by Division I lacrosse schools. He was 6-foot-4 and weighed 200 pounds as a junior from Bowie, Md. College coaches saw an athlete who balanced his burgeoning career with his faith and education, working 6 a.m. to 12:30 p.m. each day to ensure he was successful. Even in high school, he prepared for the challenge of balancing multiple endeavors.

Navy, Georgetown and Mount St. Mary’s showed interest, but he felt a draw to swimming, which played a vital role in his family.

Hayburn’s mother, Theresa, was a swimmer at Villanova and later a coach at Maryland. Her sister, Anna, was already a successful swimmer at Loyola. His brothers, Patrick and Joe, were swimmers and also headed to the Greyhounds.

“I tried to do both [sports] at the Division I level, like I did in high school, but it didn’t quite work out because the seasons overlapped between February and March,” he said. “As far as scholarships are concerned, swimming was doing well and was very solid financially for my family. My sister being there, the family played a big role. I also saw an opportunity to build something, and that was a draw for me on the leadership side.

All the while, Hayburn, whose father and grandfather served in the military, attended Loyola’s Army ROTC program. He also helped introduce Baltimore kids to the pool through the Junior Hounds program. He had a passion for giving back and managed to balance that with his swimming regimen.

“What I learned from Loyola were the principles of time management, how to be organized and disciplined, and mental toughness,” he said. “Playing both sports gave me an edge.”

Hayburn’s teammates began careers in engineering, medicine, and the Navy SEALS, but he felt he had unfinished business in college athletics. He wanted to get his master’s degree in business and wondered if lacrosse might be a good fit for his next school.

He brought his mother and brothers, Patrick and Lucas, with him to meet Gravante July and agreed to join the Mountaineers for the 2023 lacrosse season.

In two months, Hayburn had to reconnect with a sport that occupied a good part of his time when he was a teenager. He hit the wall as hard as he could and worked on his stick in preparation for the fall.

He also had to adjust his training schedule, which focused on core strength during the swimming season. He hit the weight room, looking to be more explosive and put less pressure on his shoulders, which he used to his advantage in swimming.

The adjustment process is ongoing, but Hayburn is eager for a new challenge. Although he expects to start his business career after the spring season, he hasn’t ruled out trying to turn pro in another sport. Could he follow the lines of Spencer and Bernhardt next summer?

“I’m always ready to continue competing,” he said. “I will never close the door to this area. I have a real thrill for that.