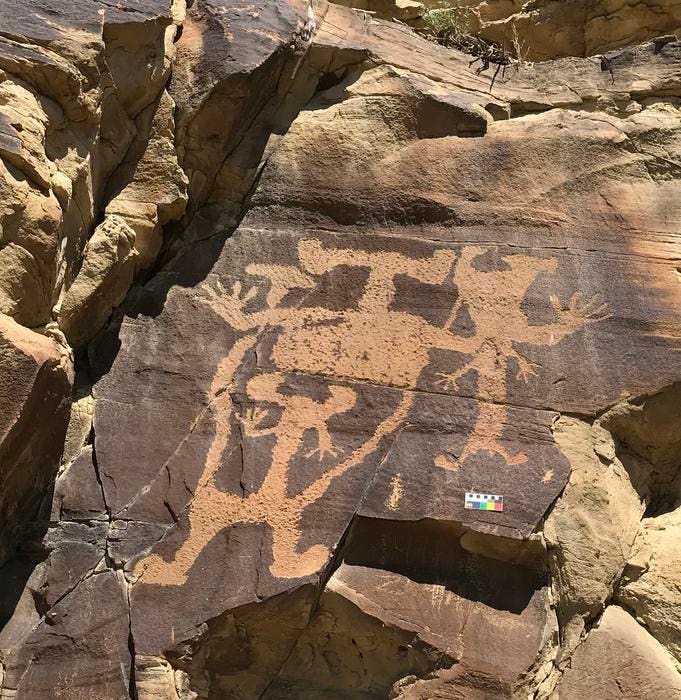 How do I know the age of ancient rock art? And more importantly, how can you do this without disrupting the site? Meinrat and Tracey Andreae of the Max Planck Institute for Chemistry recently published the results of several measurements they have taken at rock art in Idaho, Wyoming and Montana. They showed that their non-destructive detection method was able to reduce the age of several rock carvings, some of which dated back 12,000 years.

With permission from the parks where the rock carvings were located, they visited several sites north of the Great Basin, an area home to Shoshone cultural history. The rock art in this region was made over several centuries, so it is not immediately obvious how old some carvings are – some may be a few centuries old, while others are over ten thousand years old . Often the rock carvings have also been worked over a period of time, with some sections being much older than others.

Scientists can study the composition of a rock with chemical and geochemical methods, but some of these methods involve taking physical samples from the rocks. This would not be an option at such a culturally significant site. Just a few months ago, geoscientists at Caltech were fined for drilling samples at a petroglyph site in California in 2017.

But the method Andreaes used required no drilling. They used a portable X-ray fluorescence device to measure the amount of manganese and iron on the rock surface. The composition of these chemicals in the outer layer of rock changes over time at a constant rate, so even after a layer has been scraped away during the creation of rock art, it is gradually reforming.

The researchers were able to see the difference between the amount of manganese and iron in the most recently formed layer on the carved rock sections compared to the unsculpted rock around it and used that to calculate how long engraving has been done. They confirmed their method by trying it on rock art whose age was already known, and comparing it with archaeological evidence around the sites.

Based on their measurements, they were able to determine the age of the rock carvings in the northern part of the Great Basin.

“All of our analyzes suggest that the first petroglyphs were created as early as the Pleistocene to Holocene transition period, around 12,000 years ago, and were repeatedly revised by indigenous peoples over thousands of years until ‘to the recent past’, Meinrat Andreae says at the Max Planck Institute.

It is not a perfect method. It can be difficult to assess the exact age of an individual rock engraving, for example because weather conditions over the years may have affected the rock. But when measuring many different rock art images at the same location, this method is able to zero in on an approximate age of the rock carvings.

Andreae hopes this technique can be used alongside existing archaeological and historical methods to estimate the age of rock art. He said, “Our method makes the link between the natural and human sciences. It makes it possible to estimate the age of a large number of statistically relevant rock art elements – with modest effort and, above all, without the need for destructive sampling”,

Everything you need to know about OMNY, the new MTA payment method