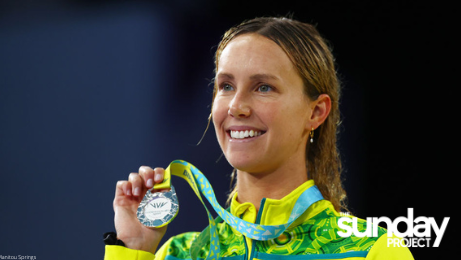 McKeon won her 10th career Commonwealth gold medal as part of the winning Australian team in the 4x100m freestyle relay in Birmingham on Saturday night.

No athlete has won more.

“It’s special – these are people I looked up to growing up and the Commonwealth Games have so much history in Australia,” McKeon said.

“They are the ones who inspired me and many other girls and guys on the team to do what we do now.

“To be a part of this history, hopefully for future generations, is pretty special.

“I know how I felt growing up and watching these people and I hope I can inspire people too.”

“It’s the icing on the cake,” Dedekind said of the new benchmark.

Dedekind, who is blind in his right eye and has limited vision in his left, clocked 26.56 seconds to beat the 26.67 set by Italy’s Carlotta Gilli in 2018.

The Australian swimming team has a collection of six gold, five silver and nine bronze at Birmingham Pool.

Scot took the gold this time around as Winnington rated his bronze swimming “in some respects” better than his 400m run.

“Tom and Duncan are first and second in the Olympics, you can’t have two best freestylers in the world let alone the Commonwealth, so I was in great company,” Winnington said.

Three Australians were the fastest in the women’s 50m freestyle semi-finals with Shayna Jack followed by Meg Harris and McKeon.

AAP with the project.

Planting mangroves in Miami, an effective method to protect the coast from sea level rise?