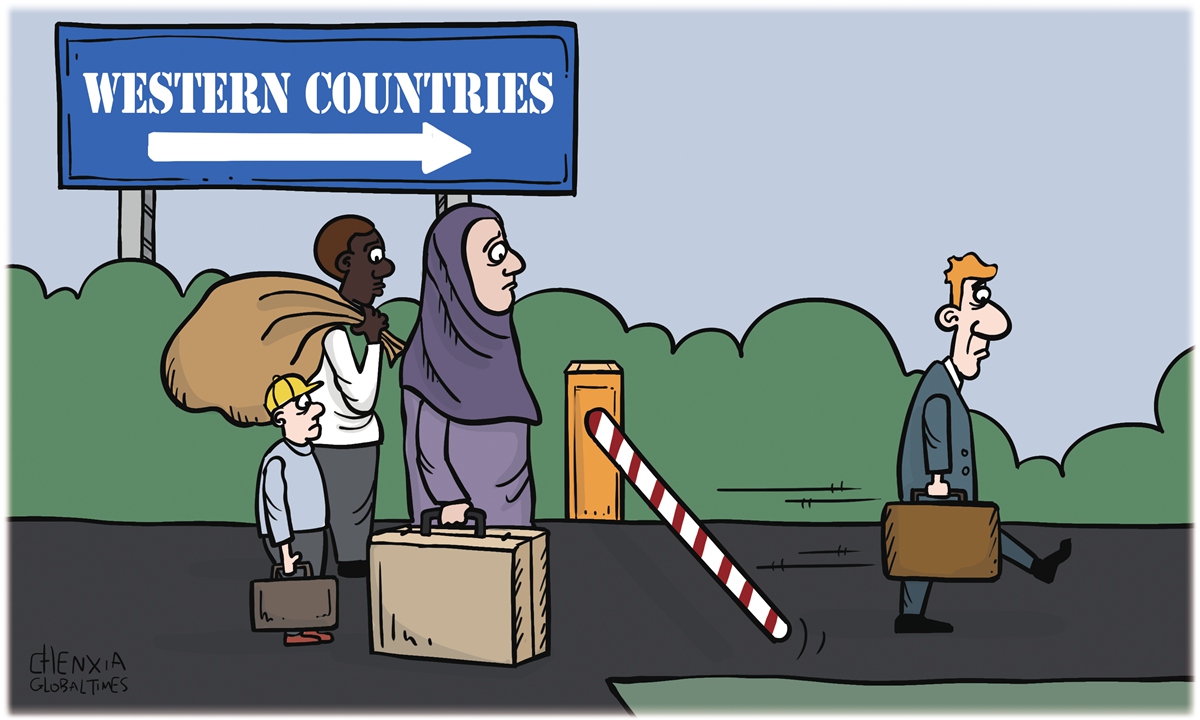 The conflict between Russia and Ukraine has led to the worst refugee crisis in Europe since World War II. The number of refugees leaving Ukraine has climbed to nearly 3 million. The United States and some European countries opened their doors to accept these refugees, but in the process, politicians and public opinion in some countries compared them to refugees from the Middle East, exposing the double standards and even racism on the question of refugees.

In the current Ukrainian refugee crisis, they have opened their doors, but in practice they divide refugees into different classes and even apply racial discrimination. Tens of thousands of African and Middle Eastern expatriates living in Ukraine faced difficulties when leaving the country. Moreover, some ultra-nationalists in European countries deliberately sought out people of color among the refugees and engaged in acts of violence against them.

First, these phenomena are essentially occidentocentrism and racism. The interpretation of refugee policy in the Western country deeply reflects the arrogance and prejudice of white supremacy. Some influential media and politicians see Ukraine as part of the Western world and define Ukrainian refugees as “white, Christian and middle class” and “our own people”. “It’s not a place, with all due respect, like Iraq or Afghanistan that has seen conflict rage for decades,” said CBS News correspondent Charlie D’ Agata.

This shows that not all refugees deserve sympathy in the Western concept. The “equality of all”, which is considered a norm in the West, is actually “some people are more equal than others”. Refugees from Africa, the Middle East and Central Asia are not so lucky.

Second, the West has politicized the refugee issue with the aim of harming Russia by taking in Ukrainian refugees. The Russian-Ukrainian conflict has its historical complexities and its roots are complex. Not only are the United States and the West unqualified to use the refugee crisis to morally suppress Russia, but they themselves are to blame. They are the root of many refugee problems in the world today.

The United States is undoubtedly the culprit for the refugee problems in countries like Iraq and Afghanistan. However, when it comes to accepting refugees from these countries, the United States backs down and shirks its responsibilities. These double standards make it hard to believe that is what the global superpower and self-proclaimed human rights defender has done.

Third, the rejection of refugees from the Middle East reflects the “Islamophobia” prevalent in Western societies. In the name of counterterrorism, the United States has ruined lives in Islamic countries like Iraq and Afghanistan, resulting in large numbers of people becoming refugees. However, refugees from these countries are randomly labeled as dangerous groups or even “terrorists” by the United States and the West. Western countries stigmatize and demonize Islam, one of the world’s three major religions, and Muslims, who make up one-fifth of the world’s population, to deepen estrangement and hinder mutual understanding between civilizations and religious reconciliation. .

The Russian-Ukrainian conflict also reflects the West’s double standards on human rights. Since the situation worsened, Western politicians and media have paid close attention to the so-called humanitarian damage caused by the conflict. But for a long time in the past, they turned a blind eye to wars, death and displacement in the Middle East and North Africa. To a large extent, the United States and the West are themselves the creators of local unrest and refugee crises. The history of the treatment of refugees by the United States and the West is not as “humane” as some make it out to be. The image of “savior” that they have built on the question of Ukrainian refugees is collapsing.

The author is a professor at the Institute of Middle East Studies at Shanghai International Studies University. [email protected]