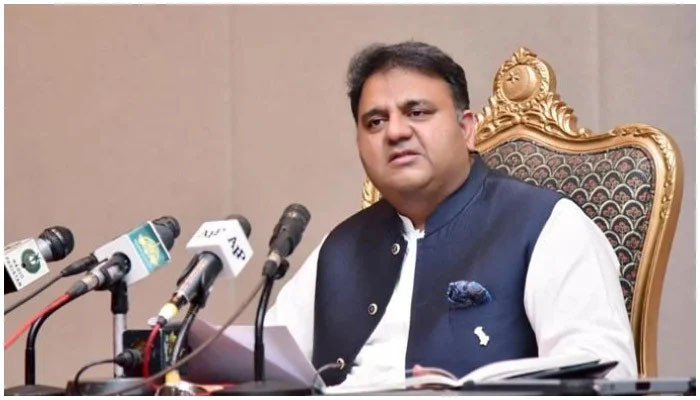 ISLAMABAD: PTI Senior Vice President and former Information Minister Fawad Chaudhry said on Monday that Imran Khan’s speech regarding the appointment of the new army chief and patriotism was not a court case and that it was inappropriate for the judiciary to comment on all matters.

Fawad’s remarks came after Islamabad High Court Chief Justice Athar Minallah censured Imran Khan for his “anti-military” statement. Addressing a press conference here, Fawad clarified that Imran spoke about the merit-based appointment of the new army chief. “It is a political matter, not a judicial one. It is inappropriate for judges to comment on every topic,” he said. Fawad said Imran asked if authority was in the hands of corrupt and rejected people to make key appointments in the interest of the country. He cited Dawnleaks and Memogate as examples of how Nawaz Sharif and Zardari thought about the military. Nawaz’s views on the military are not hidden from anyone,” said he declared.

Regarding his party, Fawad said the army and the PTI had similar views. He said Imran’s point was quite simple and straightforward – he wanted to save Pakistan from this elite, and if he was eliminated politically, then they and their children would rule Pakistan for the next 50 years.

Fawad said all the generals had strong ties to the ground and they could not follow the PDM agenda and no one doubted their patriotism. Fawad claimed that news was circulating that Shehbaz Sharif would get the approval of Nawaz Sharif’s new army chief in London. “What else can be more insulting to the Pakistani army than a fugitive giving his approval to the next army chief,” he said. “We understand that the military should not be part of the political arena, as it is a sacred institution for us. Someone like Khawaja Asif, who used to earn a salary from the Dubai company, will now send the resume. It is very unfortunate for Pakistan,” he said. Later, reacting to DG ISPR’s statement, he tweeted: “I wouldn’t have needed to make a statement to ISPR after listening to my press conference. Listen to the rest of Imran Khan’s interview with Kamran Khan tonight’.

Meanwhile, PTI Secretary General Asad Umar said Imran Khan’s statement regarding the appointment of the army chief had already been clarified as there was never any intention to harm the army. the reputation of the institution or its senior management. In a tweet, he said that the PTI and Imran Khan have always fully appreciated the professionalism and sacrifices of the military.

PTI SVP Shireen Mazari also came to the defense of her party’s chairman and tweeted: “Unfortunately the press release is concerning as he appears to have misunderstood what IK said despite clarifications; and at a time when PDM deliberately twists IK’s statement to target him. At no point in Faisalabad’s speech did IK criticize the military or its leaders”.

She also said that with the utmost respect, after explaining with great clarity through the tweets and the management presser that the IK reference i.e. the COAS issue was only in reference to the corrupt history of the PML executives -N and PPP from playing politics with the military, from Memogate to Dawnleaks, the ISPR PR was so useless.