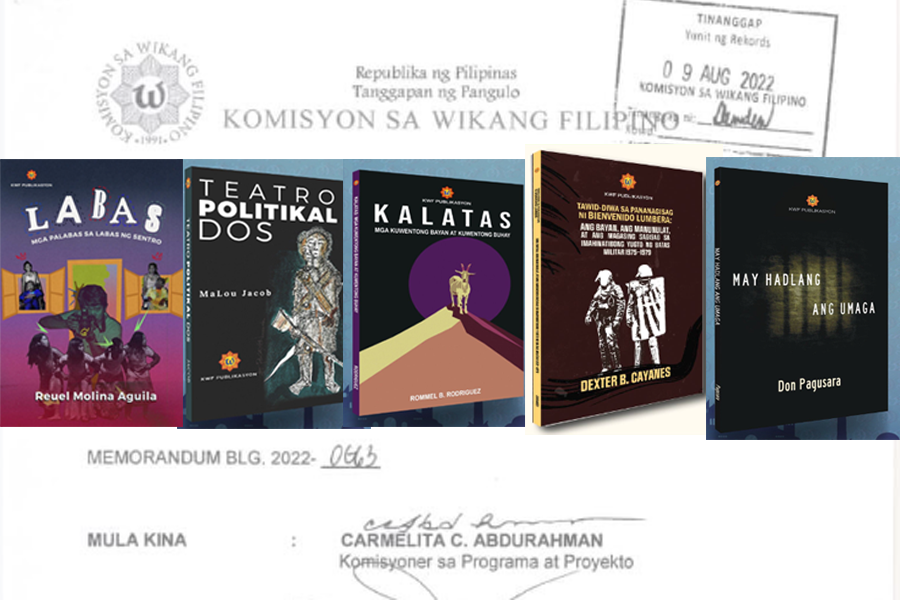 “We believe the accusers have not read our books in their entirety… We believe it is a form of terrorism to dictate what can be written and how to write it.”

In a joint statement, Reuel Molina Aguila, Dexter B. Cayanes, Malou Jacob, Don Pagasura and Rommel B. Rodriguez said NTF-ELCAC’s allegations against them are false and should be withdrawn.

“We believe the accusers have not read our books in their entirety…We believe it is a form of terrorism to dictate what can be written and how to write it,” the five authors said in their statement written in Filipino.

They added that the allegations are also defamatory and put their lives at risk.

They added that so far, some Komisyon sa Wikang Filipino (KWF) commissioners and the show’s hosts, have not been able to show any solid proof of their allegations.

“All they showed were specific words, parts of dialogue and even a bibliography that they try to associate with subversion and terrorism. It seems that the mere use of the word or reference to the event is immediately condemned as terrorism or subversion. They just seem to want something to write and how to write it,” they said.

The authors said they were invited by the KWF to publish their written work. But when some of the books were in print and others are about to be, some KWF commissioners generally called their works subversive and critical of the Marcos and Duterte administrations.

“The internet program Laban Kasama ang Bayan also intervened and immediately accused our books of being part of CCP/NPA terrorism,” the authors said.

MNCH program hosts, including Badoy, have linked KWF’s Arturo Casanova and the publications to the underground organizations for simply citing them as references in their work. These include books such as Philippine Society and Revolution, works published by the chief political consultant of the National Democratic Front of the Philippines, Jose Maria Sison and Juliet de Lima, as well as works by the late critic of art and historian Alice Guillermo and the late National Artist for Literature Bienvenido Lumbera, whom they called the leader of the Communist Party of the Philippines while in college.

On August 9, the KWF also issued Memorandum No. 2022-0663 prohibiting the publication and distribution of said books.

To read via our mirror site: KWF bans the publication-distribution of 5 new books

Casanova, in a separate statement, also denied the charges against him. He said all five books had gone through the KWF’s review process.

“All books are normally submitted for review and passed through the KWF publishing unit, including receiving imprimatur/approval from two full-time commissioners. I have never rushed or forced the publication of any these books. Apart from that, the accusation that these books are subversive dangerously undermines freedom of the free press and academic freedom,” Casanova said in Filipino.

“KWF should be the sole leader in our language development efforts. Contrary to misleading accusations, the KWF does not limit itself to publishing dictionaries and linguistic technical documents. On the contrary, we are responsible for developing and cultivating/enriching the Filipino language,” he added.

Meanwhile, various members of the academy expressed support for the five authors as well as Casanova.

In a statement, more than 30 language, cultural and educational departments or organizations stressed that “reading, analyzing, scrutinizing, citing and using any reading material, regardless of author and publisher, is part of academic freedom. writers, teachers, researchers and all citizens.

They said that many of the books — whether in Filipino or English — certainly cite or cite documents from a variety of credentials, including those from groups considered by the government to be subversive or revolutionary.

But they state that “such a citation should not be taken as agreement or sympathy with the material cited, but rather as part of the typical academic and scientific process of analyzing various sources. Let’s say a book agrees or sympathizes with a political ideology, such a tradition of socially engaged writing is respected around the world and seen as an important part of any country that calls itself democratic.

The Karapatan human rights group also denounced the red marking of the five perpetrators as well as Casanova.

In a statement, Karapatan general secretary Cristina Palabay called the banning and stopping distribution of the books “a shameless and idiotic act”.

“Those responsible for these acts are deranged individuals who use their platforms or previous or current association with the NTF-ELCAC to deprive the public of much-needed literature and materials encouraging critical thinking and knowledge of history and language. philippines,” Palabay said.

Palabay also said that the KWF memorandum which orders to stop the publication and distribution of the books calling them “subversive”, “anti-government” and with “anti-Marcos, anti-Duterte” content, creates a dangerous precedent in the exercise of academic freedom and the promotion of creative and scientific work.

“We condemn the shutdown of the publication and distribution of the books, all of which have been produced from the painstaking creative and scholarly labor of writers and members of academia. We denounce the red-marking of the President of the KWF, Dr. Arthur Casanova, and authors of said publications,” Palabay said. (JJE, RVO)

LA on the Record: Caruso on Hollywood

Is the subject of miscarriage finally getting the care and attention it deserves?