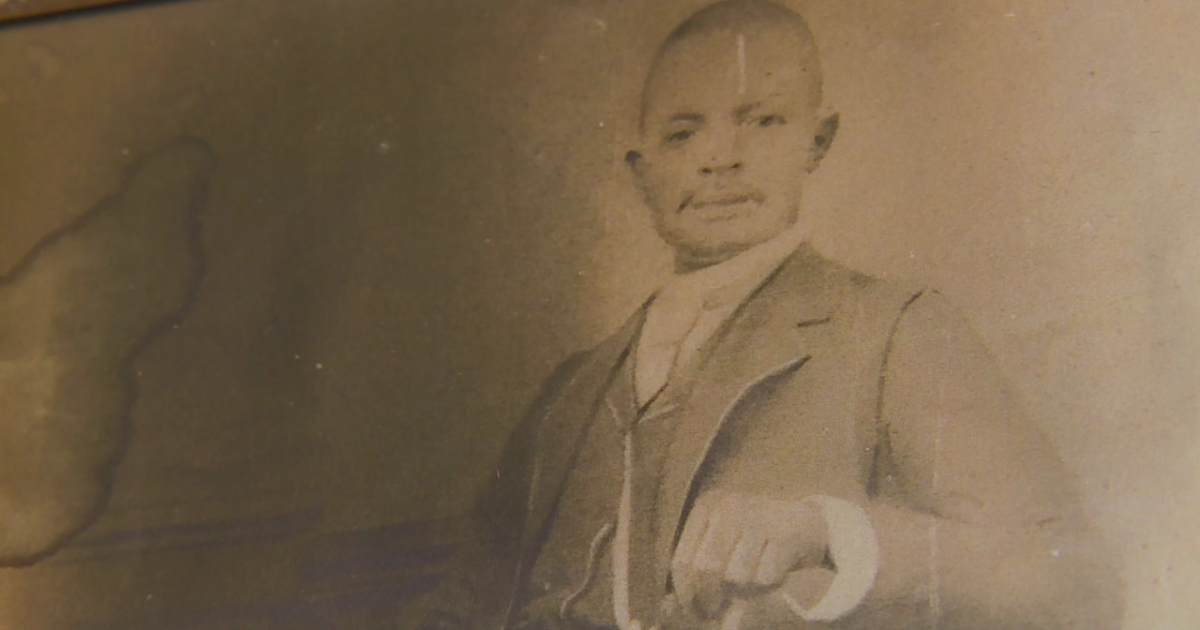 BARTOW, Fla. — If you’re a homeowner in DeLand or Bartow, your home may have a little more history than you think. Especially if you didn’t build it yourself.

A recently published book about the life of a former slave turned successful entrepreneur might have you wondering where your home is from. You might also want to turn to the historic LB Brown House for those answers.

“Here is an important story about when Clifton first realized this house had real historical value,” author Charles Warren said as he opened the book, “From Slavery to Community Builder.”

Charles is the author of the book as well as a board member. He was referring to his colleague and friend Clifton Lewis, founding president of the Neighborhood Improvement Corporation of Bartow, Inc.

The important story concerns a house that was almost demolished and forgotten forever.

The historic LB Brown House, located at 470 LB Brown Ave in East Bartow, is a two-acre lot purchased and built by a 9-year-old freed former slave, Lawrence B. Brown.

But Clifton Lewis, who knew the house was old, nearly missed that part in the late 80s.

“Our association needed a place to meet and we found this house abandoned and ready to be demolished. I knew it was a historic house, so I thought I could help restore it,” said Lewis.

The Lakeland Ledger caught wind of the restoration and reported on it. Lawrence Brown’s only living son (he had seven children and one grandchild), Robert Brown, who was living in New York at the time, got wind of it and traveled to Florida to see who was restoring the house. in which he had grown up. son passed away a few years ago.

“As they walked around the property, Brown commented to Lewis, ‘When my dad built this house…'”

A stunned Lewis quickly realized that something much bigger than the two was going on at the time.

“If those 5 seconds hadn’t happened, we might not have sat her today,” Warren said.

Years later, thanks to extensive documentation and records kept by Lawrence Brown himself and given to Lewis and Warren by his late son, LB Brown’s story is much more detailed.

The Story of Lawrence B. Brown

Freed from slavery at the age of 9, he spent his early years on his parents’ farm near Gainesville. Around the mid-1870s, he moved to DeLand, Florida, where he somehow acquired property and built at least 9 rental houses there. In the mid-1880s, as phosphate began to boom and people flocked to central Florida, he moved to Polk County. From what he had learned in Volusia County, it is estimated that he is responsible for at least 40-50 houses in East Bartow alone.

“He had the kind of personality and he was comfortable with white people. Let’s not forget that at that time, after the Civil War, a lot of white people didn’t like the idea of ​​black people being free, but he was able to be someone who got involved in the community, working with and doing business with white and black men. men,” Warren said.

Besides building houses, Brown was also very practical in many other ways. He owned a business where he repaired umbrellas, silver mirrors, dug wells and sold Bibles. Many of these artifacts can be seen at the LB Historic House.

“Anyway, Brown did it. He was kind of an everyone man,” Lewis said.

Using records and other documents provided by Brown’s late son, Warren and Lewis have made it their mission to ensure his story will never be lost and his impact on the community will continue for generations through the book “From slavery to the community”. Builder.’ They posted most of the material they acquired there to help tell his story.

The restored house is now a time capsule that features a man who was not only savvy in business, but also interested in many different things.

The documents show a handwritten study Brown made after opening a butcher shop in Bartow. He wanted to know if it was cheaper to buy a pig from the butcher or to raise his own.

“A year, two months and 22 days is how long he’s had the pig,” Charles Warren said with a smile as he read Brown’s notes.

Another shows a note simply saying his brother Joe owed him $40 and telling someone to get it from Joe and give it to his mom along with a rental agreement,

detailing that with a $5 down payment on a rental, once the resident hits $45, they can officially become a homeowner.

Inside the house you can find original furniture as well as donated pieces. Pictures of his family line the wall in the entry hallway. An old stove still sits in the kitchen along with an old cooler, or as we would call it these days, a refrigerator.

Outside, the original water supplies are still on the property. A pump handle and a well. There are two houses on the property that Bartow Inc. oversees along with two others that are not theirs. The property consists of the mansion and a rental house.

It’s a vivid image of a time that doesn’t seem so far away today.

“He was an example of how we should live today, I think that should be his legacy,” Warren said.

Clifton Lewis wants young people to find inspiration in the story of Lawrence Brown. A story he describes as true American history.

“Look what LB Brown has overcome. Born into slavery. Born into nothing. Having no formal education but becoming a very successful entrepreneur. This legacy for young people should say, “If he can do it, my God, I can do it too,” Lewis proclaimed.

You can visit the historic LB Brown House at any time and tour the grounds. To tour the interior, call 863-944-6136 to schedule a visit. You can find more information on their website.