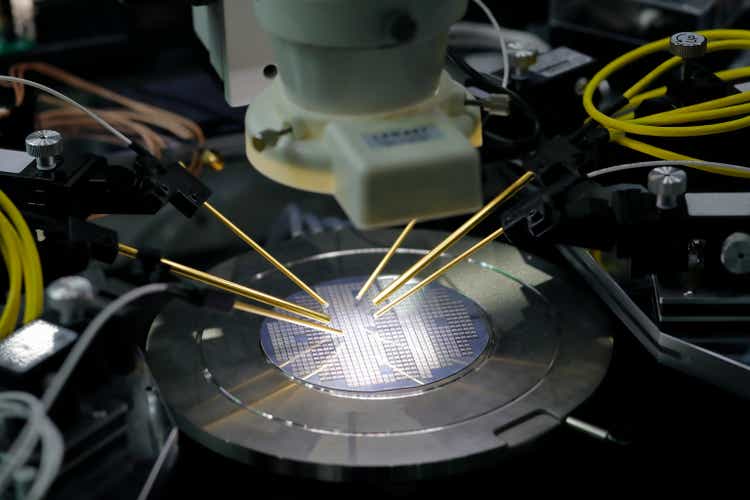 Form factor (NASDAQ: FORM) has never been a particularly easy company to model, because it has relatively few competitors that report detailed information, its customer base is quite concentrated, and the short delivery times lead to sometimes seemingly countercyclical behavior with respect to the semiconductor industry. To that end, with chip companies still seeing fairly healthy growth, FormFactor warned investors of emerging weakness in demand for edge chips from broad verticals like compute and mobile.

FormFactor shares are down about 6% since my last update, with shares declining through 2022 on growing concerns about the impending end of this unusually strong chip cycle. Compared to the broader SOX index and major customers like Intel (INTC) and TSMC (TSM), this decline was not so severe.

I believe FormFactor will do well in the long run, even with increased competition from Italian Technoprobe (TPRO.MI), as edge nodes requiring increasingly sophisticated probe cards that will further narrow the market to top vendors and support both healthy revenue and margin growth.

A decent neighborhood, but advice will keep the sentiment on ice

FormFactor’s second quarter (reported in late July) went well in terms of reported results versus expected results, but management’s guidance for the third quarter calls for a significant sequential weakening in revenue (down around 10% year-on-year) and gross margin (down around eight points), with management calling for a weakening demand environment for edge logic chips in computing and mobile applications.

Revenue grew 8% year-over-year in the second quarter, with board revenue up 9% on 18% growth in foundry and logic, 8% growth in flash and a 13% drop in DRAM. System revenue increased by 5%. By comparison, the chip industry saw a 5% increase in wafer shipments in the quarter, so FormFactor continued to grow ahead of underlying industry volumes.

For the quarter, Intel remained the largest customer with approximately 21% of revenue, while the two Samsung (OTCPK:SSNLF) and TSMC were sub-10% customers (it’s quite common for TSMC in particular to hover around the 10% disclosure line from quarter to quarter).

Micronic (6871.T), a major Japanese competitor more focused on memory chip probe cards, recently released June quarter results that included 8% year-over-year revenue growth in its business. probe cards and a slight contraction in margins (28.5% vs. 30.1%). segment operating margin). Micronics also reported a strong increase in probe card orders, up almost 52%, with the backlog up around 18%. The company has also revised down its forecast for probe cards slightly, but given that memory accounts for about 85% of probe card revenue, comparability is limited.

Likewise with Technoprobe, which has yet to report second quarter results to date. Technoprobe recently beat FormFactor in terms of probe board revenue growth (up 59% in Q1’22 compared to almost flat growth at FormFactor), and it will be interesting to see what this company has to say about its prospects.

Demand has often been volatile in the short term, but reliable in the longer term

I don’t rule out concerns about this surprisingly weak forecast, nor the recent underperformance versus Technoprobe, but I will note that near-term demand volatility has been more typical than not over the life of this society. This is a short-timeframe business and very sensitive to demand from the more advanced nodes, and with some signs of cracks emerging (including weaker handset demand) this could well be the start. of a reset.

I also wouldn’t ignore the possibility that client and application specific exposure plays a role here. While the data center market remained healthy overall, with AMD (AMD) and Nvidia (NVDA) posting sequential growth in the mid-teens, Intel posted a 23% quarter-on-quarter decline on macroeconomic challenges and customer inventory reductions. Similarly, there is growing evidence of slowing demand for PCs, smartphones and consumer devices, which affects FormFactor’s above-average exposure to SoCs (system on chip) and mobile processors.

In the longer term, I do not rule out the risk of losing market share for Technoprobe, but I would note that FormFactor continues to overinvest its Italian rival in terms of R&D expenditure. This is relevant because increasingly sophisticated chip/packaging architectures place much higher demands on probe card developers to develop cards capable of accurately and quickly testing these advanced chips. R&D spending doesn’t guarantee superior technology (R&D spending and R&D productivity are two very different things), but I would note that FormFactor has a strong track record of first-to-market innovation.

With increasingly demanding testing requirements for edge nodes, I still expect FormFactor to outgrow the broader chip market over time. While I expect overall chip volume growth to continue somewhere in the 4% to 6% range longer term, I expect growth of around 200 to 300 basis points for FormFactor because it leverages cutting-edge, higher value testing opportunities.

Margins will be interesting to watch. Management still targets long-term non-GAAP gross margins of 47% (vs. 45% in FY’21, 45.4% in FY’20 and 47.4% in Q2’22), but chip companies have their own margins to preserve and many chip company representatives have spoken at trade shows about the need for probe companies to maintain both R&D progress and affordability.

I don’t claim to know how long this correction in demand for compute and mobile logic probe cards will last, or how severe it will be – the semiconductor industry has a long history of peaks and troughs that are hard to call. I don’t think this will be a particularly severe correction, but again I note the risk of some idiosyncratic exposure – end markets like data center and automotive will likely outperform mobile in the near term and that could lead to weaker short-term results from FormFactor.

Longer term, however, I am confident that growth in demand for high-end chips will continue to support mid to high single-digit revenue growth for FormFactor. Also, while I’m more conservative on margin improvements versus gross margin, SG&A, and R&D targets reported by FormFactor, I believe operating margins (GAAP) will improve through the mid-1920s. and towards 20% over the next few years. decade, with FCF margins moving toward high teens and supporting low to middle teen growth.

Using discounted cash flow, I believe FormFactor is priced for a low double-digit long-term annualized total return. I’m afraid there’s another shoe to drop when it comes to advice and short-term demand from logical clients, but that risk is an integral part of investing in FormFactor. Investors less willing to take the risk of buying too soon should at least keep this on a watch list, as I continue to believe that FormFactor is a good way to play on the continued growth of advanced semiconductor production over the next 10 years. years.

Croesawdy: Councilors back method of demolition of historic Newtown building