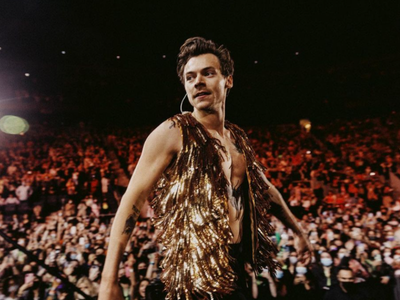 Now that’s innovation at its best…

When you think of Harry Styles, the first thing that comes to mind is college, right?

If so, then we’re guessing you have a fantastically vivid imagination… Wink, wink, nudge, nudge.

Many Texas State University students will be rated on this British popstar, as a new course based on him will be part of their curriculum.

“Louie Dean Valencia, associate professor of digital history at Texas State, announced last week that he will be leading a spring 2023 course titled, “Harry Styles and the Cult of Celebrity: Identity, the Internet, and European Pop Culture. “. (CNN)

It sounds quite progressive and we love it…

If there’s one thing we think education should be, it’s that it’s innovative.

Students should be exposed to courses that test their ability to think outside the norm and apply their learnings to the current state of affairs in the world. Judging by the title, it looks like this course has peaked for many of their interests.

Of course, the announcement of this course has prompted many students to consider their future at their own colleges and consider the possibility of transferring to the state of Texas.

“The course centers the ever-popular Briton in a broader discussion of” the cultural and political development of modern celebrity as it relates to issues of gender and sexuality, race, class, nation and globalism, the media , fashion, fan culture, internet culture and consumerism,” according to Valencia. (CNN)

The professor shared his motivation behind creating this course, saying that over the past couple of years he’s had so many conversations with students who started with a love for Harry Styles’ music.

He’s the type of educator who gets a gold star in our books. When an educator can take students’ interests and turn them into a means to spark an insightful way of learning, that’s a win…

“Self-expression and being comfortable with yourself is a big part of Harry’s message, as is treating people with kindness,” Valencia said. “A lot of people, myself included, feel like they grew up with him – and so there’s a connection.” (CNN)

It seems that university studies can also be an art form that inspires a positive self-image.

Sri Lanka vs Pakistan: record pursuit in Galle and other stats from first Test