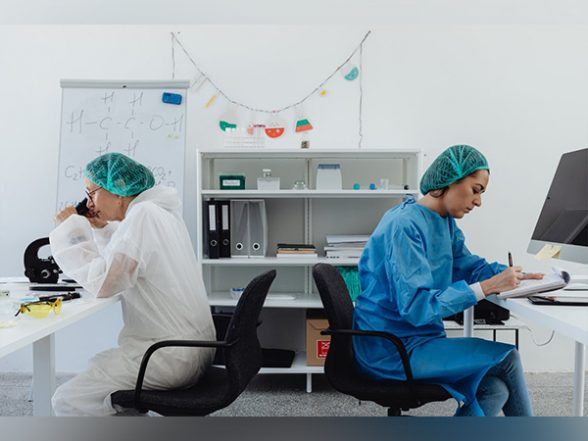 Washington [US], Aug 30 (ANI): In Gram-negative bacteria, which include some of the most devastating human pathogens, only two polysaccharide export mechanisms have been identified so far. Now a research team has identified a third, entirely new mechanism for how polysaccharides are exported. These discoveries open the way to a complete understanding of the mechanisms involved in the protection, motility and interaction of many bacterial pathogens.

Bacteria not only feed on sugar as a source of carbon and energy, they also produce and secrete a wide variety of polysaccharides. Polysaccharides are chains of sugars and are the most abundant biopolymers on earth. Long sugar chains play a vital role in free-living, commensal and pathogenic bacteria. They are also crucial for bacterial protection, sheathing cells against environmental stresses such as desiccation, immune effectors and predators. In addition, their adhesive and structural functions contribute to surface colonization and biofilm formation. They are also important for the successful application of antibacterial vaccines. Thus, they hold the keys to understanding and controlling human, animal and plant interactions, both beneficial and pathogenic. And finally, polysaccharides are used in the food, pharmaceutical and medical industries.

Read also | Blood Cancer Awareness Month 2022 Date & History: From significance to blood cancer facts, everything you need to know about this month.

The export of polysaccharides is a major challenge because the molecules are chemically diverse and very large. In Gram-negative bacteria, which include some of the most devastating human pathogens, only two known mechanisms for polysaccharide export have been known so far: an outer membrane protein OPX (in the so-called Wzx/Wzy and ABC transporters). pathways) and an outer membrane b-barrel protein (in the so-called synthase-dependent pathways). Yet, there are examples of pathways that do not appear to follow these simple patterns: in particular, in some Wzx/Wzy pathways, outer membrane b-barrel proteins were known to be important for polysaccharide export, e.g. in Vibrio cholerae and Myxococcus xanthus. , but the exact mechanism was unclear. Additionally, other studies describe short OPX proteins lacking the part that integrates into the outer membrane. Here, it is unclear how these proteins could support the export of polysaccharides.

A research team from the Max-Planck Institute for Terrestrial Microbiology led by Lotte Sogaard-Andersen was able to shed new light on these questions. Using experiments and computational structural biology, scientists are providing evidence for an entirely new mechanism for how bacteria can export polysaccharides across the outer membrane. Johannes Schwabe, graduate student and lead author of the study, and Dr. Maria Perez-Burgos say, “We started by looking closely at the Wzx/Wzy-dependent pathway for the synthesis of a secreted polysaccharide called EPS in M. xanthus.” According to current knowledge, the EPS would be secreted through the outer membrane by an OPX protein integrated into the membrane. However, the group found that an outer membrane b-barrel protein called EpsX is also important for EPS export. “Then, surprisingly, we found a corresponding short periplasmic OPX protein EpsY that completely lacks the part to cover the outer membrane. Together with Dr. Timo Glatter, we also found that EpsX and EpsY interact directly.”

Read also | National Nutrition Week 2022 Date, history and meaning: everything you need to know about this day dedicated to good nutrition and good health.

Based on their observations and computational structural biology, the scientists propose that EpsX and EpsY represent a novel type of translocon for polysaccharide export across the outer membrane, where a b-barrel protein functions explicitly as the part spanning the outer membrane in a bipartite complex with an entirely periplasmic OPX protein.

According to Lotte Sogaard-Andersen, this detailed knowledge could open up new ways of controlling pathogenic bacteria. She explains, “Marco Herfurth, a graduate student in my research group, discovered using computational genomics that similar composite systems are prevalent in Gram-negative bacteria. For example, this new system explains how V. cholerae secretes its VPS polysaccharide, which is important for biofilm formation and virulence. Thus, our findings not only have significant implications for our understanding of polysaccharide export in M. xanthus, but also profound implications for our understanding of polysaccharide export in general in Gram-negative bacteria. (ANI)

(This is an unedited and auto-generated story from syndicated newsfeed, LatestLY staff may not have edited or edited the body of the content)