The pandemic has completely reshaped our relationship with food, in both miniscule and monumental ways. As mandatory closings swept the country in early 2020, grocery store lines snaked around the block. Many shoppers have adopted an “essentials only” mindset, avoiding guilty pleasures. Restaurants have halved menus or closed altogether. Some hunker-downers have started cooking at home for the first time, while others have sanitized their touchless deliveries before carrying them inside. Large family celebrations have been postponed indefinitely.

For low-income people and those living in underserved communities, access to food has reached critical levels. A report produced by USC found that about 1.2 million households in LA County experienced food insecurity – defined as “a disruption of regular eating due to money or other limited resources” – between April and December 2020. The report also found that one in four low-income households remained food insecure in 2021.

Using food as a focal point, the new “At the Table” exhibit brings together a collection of Los Angeles-area artists to explore the ways the pandemic has forced us all to reevaluate our priorities, adapt, and come to terms with it. .

The group show, which opened at the Armory Center for the Arts in Pasadena on July 29, includes works inspired by and, in some cases, made with foodstuffs. There are pieces that celebrate food-based cultural traditions. Some are watching carefully how citizens and natural resources have been exploited in the name of food production. Others highlight artist-led community efforts to provide food and essentials to those in need through LA Gallerygoers can participate in interactive workshops that encourage personal reflection, as well as social connection. Visitors can also donate shelf-stable foods to a free, on-site community pantry.

Prior to the opening, we spoke with four of the participating artists to discuss how they integrated food materials and food-related issues into their submissions.

For the Alhambra-based artist Yeu “Q” Nguyen, food is the key to releasing memories and emotions. The childhood moments spent helping your grandmother in the kitchen, the sublime smell of your favorite dish, the last meal you shared with your family before confinement, she wants to tap into all these sensations and feelings. Her “Sweet, Sweat and Love,” a set of usable dispensers filled with dessert-scented hand sanitizers, floods the senses with sweetness while acknowledging our bittersweet new normal. With an array of textile pieces depicting noodles, peanuts and fish heads, she looks back on her Vietnamese upbringing and, at the same time, addresses social issues that may seem familiar to a wide variety of immigrants and refugees in the States. -United.

Nguyen will lead in-person workshops in which visitors will create dumplings of fabric, fill them with written accounts of their feelings, and contribute them to his interactive sculptural work entitled “Emotional Dumplings”.

“It’s about everyone coming together and giving a little piece of themselves,” she said. “I hope people can come and do this interactive thing and experience how my ritual makes them feel. Then they can develop their own ritual to process emotions and share them with others.

Jackie Amezquita was drawn to corn dough as a medium both for its practicality as a binder and for its deep connection to her heritage. “Corn is a fundamental nourishing ingredient in Latin American culture,” she said. “I grew up in Guatemala and I remember going with my grandmother to the mill to grind corn. Mixing it with dirt was my way of playing because we didn’t have toys like the kids have here.

In 2020, she revived this youthful hobby to create “Proclamación”, an ongoing interactive series that examines how food can provide a sense of place. She created slabs using masa, hydrated lime and earth that she salvaged from 36 LA neighborhoods. Then she held rallies across the city and encouraged attendees to eat various dishes using the slabs instead of plates. The results offer a unique view of the topography – when hung side by side, the food-splattered slabs create a kind of map tracing the city’s various foodways.

“What sparked these pieces was this sense of home and belonging,” Amézquita said. “I started thinking about how food provides immigrants with both nourishment and a sense of identity. In Los Angeles, there is a cross-cultural connection with all these different dishes. Meaningful interactions can happen on a personal level, and food is an invitation for us to have those conversations.

Gabon“Fire and Salt” examines the impact of salt beyond its ability to add flavor to a dish. The series was inspired by a 2017 visit to Dakar, Senegal, during which the Jamaican-born artist observed the famous pink waters of Lake Retba, a huge salt mining site. “I witnessed the labor-intensive environment that people worked in,” he recalls. “Work makes you cry. You see people harvesting this salt for eight or nine hours.

Back at his base in Santa Monica, Gabon began researching the history and politics surrounding the global salt trade and charting the effects of salt mining on the environment. He also explored health issues related to salt intake, paying particular attention to how these issues affect underserved black communities in the United States.

The multimedia works presented in the exhibition incorporate real salt crystals, which change and grow over time. The coins also feature pairs of joined hands, in homage to these West African miners. “Hands, to me, are about people you don’t see,” he said. “You see their work, but you never see their faces or know their names.”

With his oil painting “Food Box”, Francisco Palomares pays tribute to the farm workers who continued to work in the fields during the early months of the pandemic, even as much of society sheltered indoors. Surrounded by cardboard to give the appearance of a typical produce container, the canvas is filled with squash, peppers, nopales and corn – vegetables commonly used in Mexican dishes. A group of painted marigolds lines the bottom of the box, serving as an ofrenda commemorating workers who have lost their lives to COVID.

Palomares also brings its interactive piece “Francisco’s Fresh Paintingsat the exhibition. The mobile-turned-studio is part art installation, part love letter to the roadside fruit vendors he grew up seeing in East LA In the summer of 2020, he began setting up the cart in various locations around town, selling bespoke-order oil paintings of fruits, vegetables and sweets like pan dulce.

“A fruit cart and the person behind it are automatically considered ‘less than,'” he said. “But I’m turning this upside down. I am preparing not only to represent myself as an artist, but also to represent the community where I come from. Any street vendor who goes out with his cart is an entrepreneur. It is a reflection of that. » 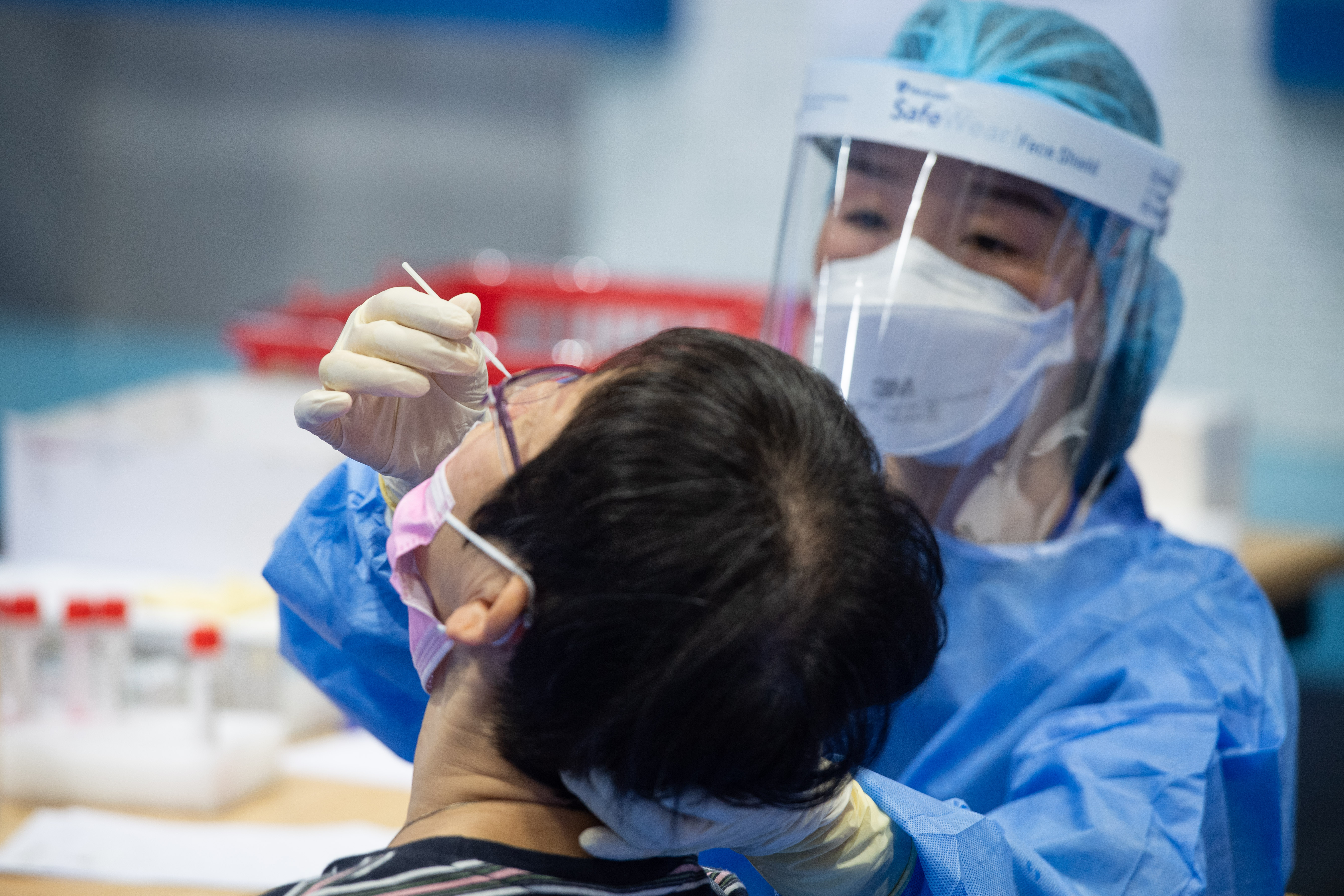