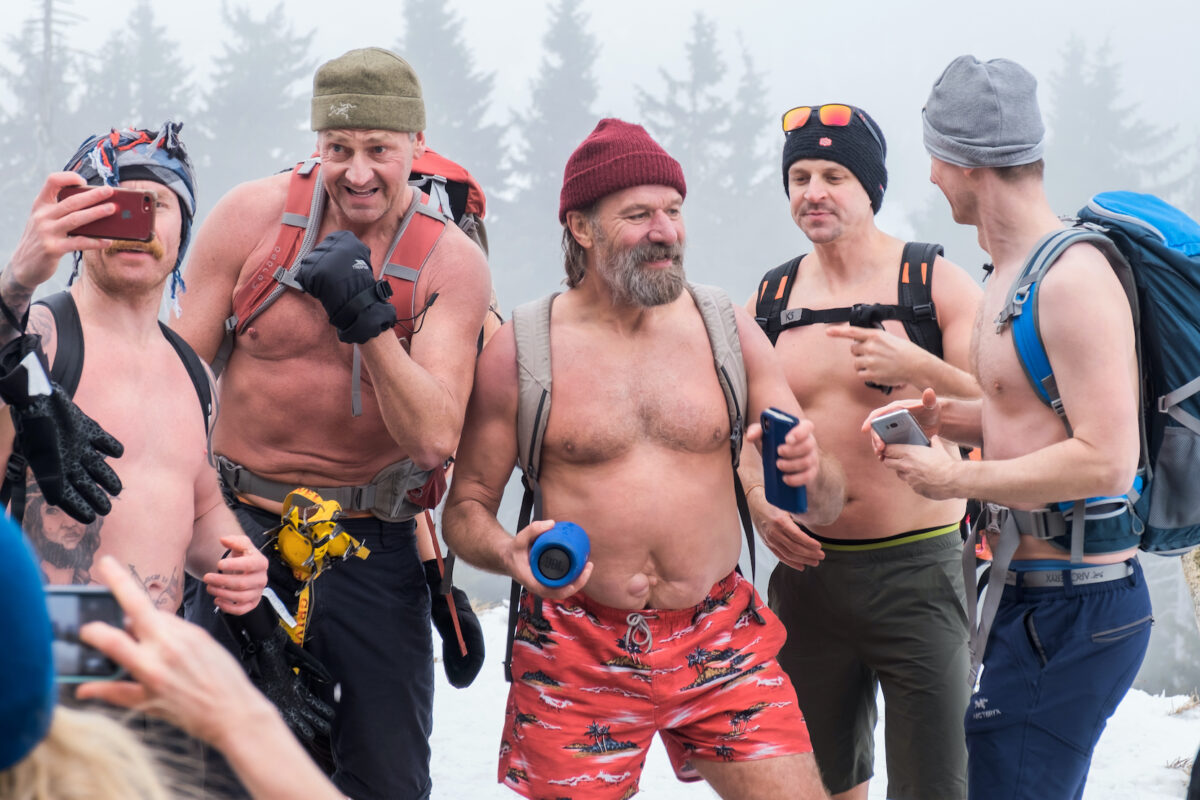 When the Solari Report announced that Wim Hof â€‹â€‹would be the recipient of the Hero of the year 2021 price in December 2021, we have taken note. Calling Wim Hof â€‹â€‹one of the men most likely to make a huge difference in natural healthcare in the years to come, they shared its extremely practical, results-oriented and virtually free techniques.

Who is Wim Hof?

Wim Hof â€‹â€‹is a 63-year-old Dutch motivational speaker, extreme athlete and willing experimental candidate who has made it his mission to share what he has learned with the rest of the world. Nicknamed “The Ice Man”, Wim Hof â€‹â€‹is best known for his ability to withstand extremely cold temperatures, so much so that he holds the Guinness World Record for the longest ice bath (1 hour, 52 minutes and 42 seconds) plus 26 other world records for a variety of equally admirable feats.

The story of how he first experienced the method he claims saved his life is extraordinary, if sad. His wife, suffering from extreme depression, committed suicide by jumping from an eight-story building in the middle of the night, leaving him with four young children to raise.

What followed, as they say, is history.

A chance event – a swim in an icy lake – allowed Wim Hof â€‹â€‹to briefly but intensely escape the grief that consumed him after the death of his wife. After his first immersion in the frozen lake, he found himself drawn again and again to this icy water in an attempt to ease his suffering, if only for a few minutes each day, so that he could muster the strength he needed. needed to cope with her grief and continue to care for her young family. The effects of freezing water demanded nothing less than his full attention.

The Wim Hof â€‹â€‹Method involves a particular method of breathing designed to stimulate and stress the autonomic nervous system of the body in such a way as to bring about health. It also includes cold therapy via ice baths, cold showers or brutally cold outdoor experiences.

While many of us may be hesitant to experience the extreme cold therapy that Wim Hof â€‹â€‹so powerfully demonstrates, any of us can start using his breathing exercises today. And once you discover the respiratory benefits, you might be excited (or at least curious) to explore the extraordinary cold therapy benefits it promotes.

What can the Wim Hof â€‹â€‹breathing method do for you?

How is it possible ? And how effective is this breathing technique in reducing pathogens?

In a study conducted in 2014 at Radboud University Nijmegen, 12 young men trained in the Wim Hof â€‹â€‹method were injected with endotoxin. In this controlled study, 12 other young men received a similar injection, having received no such training.

â€œWe indeed observed that in the trained subjects, the release of inflammatory proteins was attenuated and that they presented much less flu-like symptomsâ€, explains Dr. Matthijs Kox told Science Daily.

The breathing technique taught by Wim Hof â€‹â€‹produces twice as much epinephrine (adrenaline) as a first bungee jump. Epinephrine levels peaked in trained participants before and at the time they received the bacterial injection. This coincides with when they started their learned breathing techniques.

The result? A noticeably marked decrease in the body’s inflammatory response. It should also be noted that the increase in epinephrine in the blood triggered an increase in white blood cells, those warriors of the immune system.

Simply put, within the first hour after receiving the endotoxin, the body’s immune system was at work rendering the toxin harmless.

While scientists previously believed that the body’s innate sympathetic nervous system and immune system could not be intentionally influenced, experiments involving the Wim Hof â€‹â€‹method arguably prove otherwise. These studies have important implications for the treatment of a variety of conditions associated with the destructive effects of inflammation.

Wim Hof â€‹â€‹and his team continue to work with research institutions to explore the potential of the Wim Hof â€‹â€‹method.

You can watch Wim Hof â€‹â€‹teach the technique to a volunteer on the Lewis Howe YouTube channel.

You can also read more about the scientific basis behind the Wim Hof â€‹â€‹method and the method itself on his website: WimHofMethod.com/science.

Note: The Wim Hof â€‹â€‹Method may not be recommended for people with epilepsy, high blood pressure, heart disease, or a history of serious health conditions or migraines. It is also not recommended for pregnant women. If any of these describe you, please read Wim Hof’s book and speak with your doctor before considering using the Wim Hof â€‹â€‹Method.

James Templeton founded Uni Key Health Systems in 1992 and now the Templeton Wellness Foundation as a way to give back and help others achieve the health and well-being they seek.

Factor investing: A method to adopt?