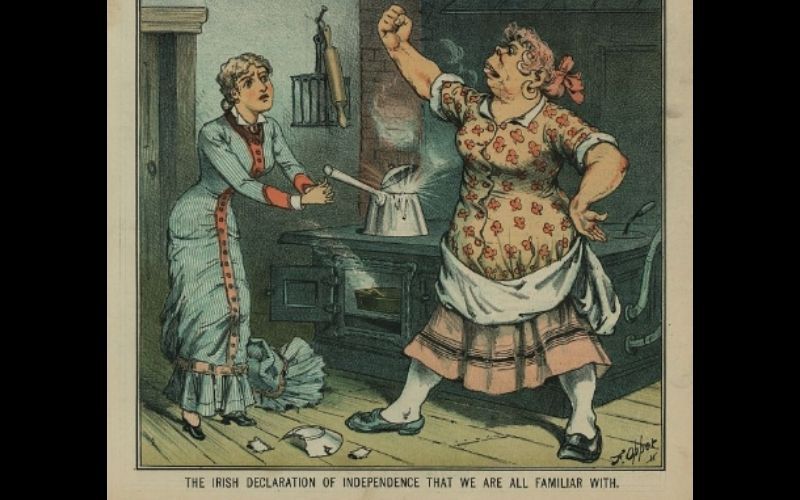 The cartoons frequently depicted Bridgets as subhuman, toothless, brutal women somewhere between a man and a woman and between a human and an ape.

The social stigma faced by Irish immigrants and Irish women, in particular, was largely driven by nativists, who feared the large influx of Irish Catholics into the United States.

Bridgets was the butt of music hall jokes and suffered prejudice and racism, even from other maids.

In a letter to the New York Times in 1895, one of these housekeepers lamented that Irish immigrants had infiltrated the domestic profession.

The woman described Irish women as “the dirtiest and most grossly ignorant people” and called on then-President Grover Cleveland to annex Hawaii, charter several steamships and send all women from Irish room on the island on St. Patrick’s Day where they could “fight amongst themselves”. themselves until their extermination”.

The anonymous author’s sentiment was shared by Little Women author Louisa May Alcott, who wrote a long article in the Boston Transcript in 1874 titled “the handmaiden problem”.

“For several years Irish incompetents have reigned in our kitchen and a general unease has invaded the house,” Alcott wrote.

She said her most recent Irish servant had been “exceptionally intelligent” but added that “his race’s faults seemed invincible”.

“Winter has been most trying. My first edict was ‘Biddy must go’.”

Alcott said half a dozen Irish girls had applied to replace the maid.

His answer ? “No Irish need apply”.

Unlike most other immigrant women, Irish women often traveled alone without a husband or family, while more Irish women emigrated in the 19th and early 20th centuries than men.

At an average age of 21, they were significantly younger than other immigrants.

The majority of Irish women flocked to domestic service jobs on the East Coast, with a whopping 94.5% of employed Irish women living in Kingston, New York, in 1860 employed as servants.

The fact that they spoke English and likely had experience in similar jobs in their home country made them ideal candidates for the position. The profession was also the preferred choice of many Irish women as it offered relatively good pay and covered most living expenses, allowing workers to save money and pursue the American dream.

“Despite prejudice, many Irish women have managed to lift themselves out of poverty and prosper in their adopted country,” an RTÉ radio documentary said recently.