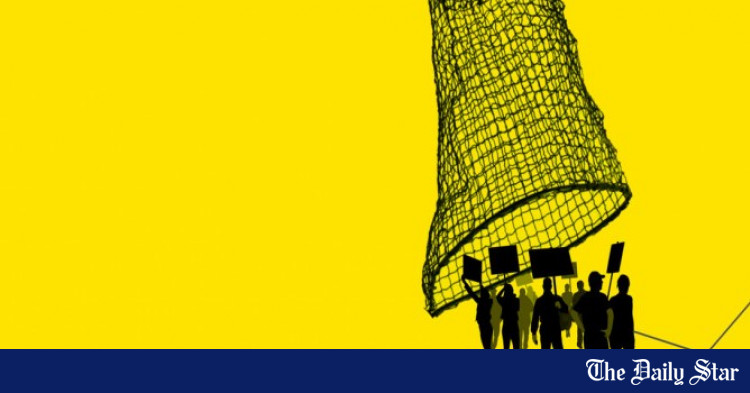 Recently, a Facebook post about the harassment of a woman and a photographer doing a photo shoot in the Curzon Hall area of ​​the University of Dhaka went viral. The status described how, because the woman was wearing a ‘sleeveless blouse’, two teachers (a woman and a man) behaved abominably towards them – accusing them of taking ‘naked’ photos and making other comments so hateful. Contacted by the media, one of the teachers involved denied the incident. But from the comments and responses on social media, it has become clear that readers are of the opinion that university professors make such comments about women’s dress, and that sometimes they try to control women’s clothing and conduct and engage in decidedly inappropriate behavior.

How do our higher education providers have this negative image attached to them? If we examine the reasons, we find that in recent times, a number of student movements in universities have stemmed from verbal and physical abuse by female students and a lack of justice surrounding these incidents. When female students have spoken out against the imposition of excessive restrictions on their freedom of movement, university authorities have not only shown indifference – in many cases they have made unwelcome comments about protesters or said suggestive things about their personality. Female students are regularly victims of verbal abuse, and unfortunately in some cases, this abuse comes from the teachers themselves.

For all the latest news, follow the Daily Star’s Google News channel.

In addition to this, the lion’s share of students who also participate in these abuses are linked to the student wings of powerful political groups. Instead of being held accountable, they are even more given a free pass. As a result, the abuses continue.

On July 17, a female student filed a complaint after five students harassed, filmed and attempted to rape her at Chittagong University. Two days passed before a written complaint was accepted. As the authorities failed to take appropriate action, protests broke out at the university. Students and teachers spoke in the media about how such incidents had happened before on campus, but authorities ignored the complaints. In previous cases, the attackers had not been punished even after being identified. In fact, they continued to receive patronage from powerful parties and academic authorities.

The state of mind of the authorities became clear when, in an online discussion, UC assistant supervisor Shahidul Alam said the place where the girl was attacked was “isolated”. The presenter had to remind her that the Jamal Nazrul Islam science lab was near that place, so why couldn’t a female student go there? How can the hope of reparation be anything but a remote possibility, when the person in charge of providing security is the one who makes separate rules for women and blames the victims?

In addition, members of the investigation committee were found to make comments such as: “If you wear clothes like this, they will of course take pictures” and ask questions such as: “Why are you you go out so late at night? »

Blaming victims instead of providing safety – we have seen this happen time and time again on different campuses. Although this unfair burden is usually imposed on female students, male students are also sometimes victims.

For example, on July 25, a student named Bulbul Ahmed was stabbed and killed at Shahjalal University of Science and Technology (SUST). During a dua mahfil organized for him amid student protests over campus security, the vice-chancellor said, “Lately there has been no discipline on our campus. The way people walk around freely at all times and however they want – even we feel embarrassed when we see it.”

University campuses are meant to be spaces of freedom for students. Responsible teachers must feel embarrassed when the environment does not allow them to move freely. Yet we now see that their responsibility seems to have been limited to setting limits and drawing a circle of fear around ordinary students.

Readers probably remembered that earlier this year, a student at SUST accused her dorm manager of misbehaving with her. Police were then called to campus to quell the movement which consequently began to demand safe dormitories for women. Batons, bullets and tear gas canisters were used against protesting ordinary students, following which the movement turned to demands for the VC to resign. After almost two weeks of protests, their demands were not granted. Instead, that the VC views the just demands of the students as unwarranted expediency and that the female students of Jahangirnagar University are not marriageable because they do not impose movement restrictions – such comments from SUST VC spread on social media.

When a Vice-Chancellor expresses the opinion that the only reason a woman goes to university is to get married, the word “university” is completely thrown into question. By segregating female students, limiting their freedom of movement, taunting them and more, universities are being established as welcoming to abusers, not students. This attitude flourishes due to apathy towards the implementation of the High Court’s Guidelines (2009) on creating educational and working environments free from sexual harassment.

If we read the definition of sexual harassment written in section 4 of the guidelines, we can come to the conclusion that often, in the name of discipline/control, teachers say things and behave in certain ways that are clearly wrong. sexual harassment. They include: i) indecent gestures, teasing with abusive language, stalking, teasing with a sexual connotation; and ii) Prevent participation in sporting, cultural, organizational and academic activities on the basis of gender and/or for the purpose of sexual harassment.

Under the guise of guardianship, teachers still act against guidelines and reinforce inequalities. The guidelines also give clear direction on how each educational institution should establish a complaints committee. However, since the last update, not all universities have formed such committees. Even if they exist, they have not been formed according to the prescribed rules.

It is crucial that steps are taken to ensure that all members of the university are aware of these guidelines. That’s far from being the case. In fact, if you ask any student if they know where and who in college they should talk to if they are being sexually harassed, almost 100% will say “no”.

Whenever questions are raised about sexual harassment, we see authorities worrying about the image of the university. Yet a history of harassment and abuse also pursues and filters the collective memories that make up the “image” of a university. Alongside written history, these memoirs, transmitted through oral history, ultimately contribute to a lack of progressive thinking in universities.

Imagine a university where students can travel safely and victims of sexual harassment get justice. Wouldn’t the image of such a university be even higher?

One often gets the impression that universities are no longer spaces of free thought, but function as institutions of thought control. Where control over students is maintained at a micro level through violence and fighting forces. Apathy towards ending sexual harassment is only one symptom of this control.

However, I hope that I will be proven wrong.

Dr Gitiara Nasreen is a media analyst and professor in the Department of Mass Communication and Journalism, University of Dhaka. This article was translated from Bengali by Shuprova Tasneem.