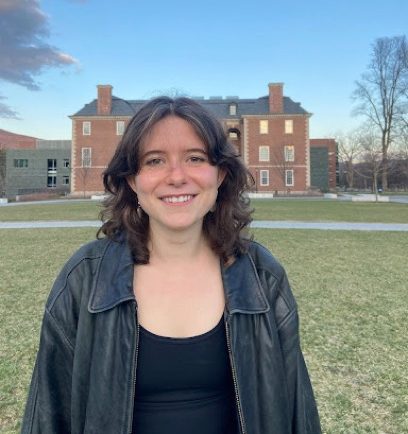 Each week, we randomly select a Unix from a list of all current College students for our One in Two Thousand feature. As long as the owner of a selected Unix agrees to be interviewed and is not a member of the Record board of directors, this person becomes the subject of our conversation. This week the computer (using an R script) picked Isabelle Sanderson ’25, who talked about her favorite cafe in New York, roller skating and her interests in art history and psychology . This interview has been edited for length and clarity.

Maria Lobato Grabowsky (MLG): We’re both in the same entry, Sage 2. What’s your favorite thing about life in Sage so far?

Isabelle Sanderson (IS): I will be really honest. When I got the housing assignment over the summer, I was really excited just because I liked the color sage. I wanted to live in Frosh Quad and between Willy and Sage, [there was] no difference apart from the one with a nice name, in my opinion.

MLG: What do you think you will miss most about Sage next year?

IS: Proximity. Moreover, it really feels like it’s [in] a middle-school. It feels collegial.

MLG: We’re also both from New York, which certainly has a lot more to offer than Williamstown. If you had to choose one New York store, cafe or restaurant to add to Spring Street, what would it be?

IS: Oh my God, I would choose Plantshed. It’s my favorite coffee. I talk about it way too much. They also have really good matcha and really good vegan cashew brownies which are weird but so good. If you buy enough coffee from them, they give you a free plant!

MLG: I feel like we need a plant store on Spring Street.

MLG: Now that the weather has improved, you’ve talked a lot about skating. Tell us more.

IS: I started skating when my best friend at the time really got into it. She’s one of those types of people who will find something and hang on to it completely. So I think it was easy to be like, ‘Oh, we’re going to hang out and we’re going to skate.

MLG: Would you say you have a strong memory of skating?

IS: God, yeah. I was roller skating at the Mermaid Parade a few years ago, which happens at Coney Island in June, and it’s super exciting. Everyone dresses up like mermaids and then there’s a parade going through the crowd. This guy waved us into the parade because he was also on skates, so we sneaked into the parade and roller skated past this guy’s float. I tried to do this thing that I really liked called “pulling the duck”, where you bend down and stretch out one leg, and I fell. [Laughs.] And all [of] people were like, “Hey, it’s okay.” They were actually really cute about it. But it was really funny because at that moment I had to keep going.

MLG: Where do you plan to skate at Williams?

IS: Oh my God. I have no idea. I added myself to a roller-skating group where there’s a bunch of people roller-skating, which is cool.

MLG: I also know that you really like art and art history and that you go to many museums in Williams. I was wondering: what do you think is your favorite museum?

EST: Definitely MASS MoCA. Well, actually, I don’t know. Maybe WCMA because they do really interesting and different exhibits…and they do a really good job of contextualizing the work and explaining it. And they [have] quite a bit of diversity in what they show, or at least what I’ve seen so far. I really liked Sweaty concepts. And because of my recent [class] mission, I spent a lot of time in Sol Lewitt’s mission.

MLG: What class was the assignment for?

MLG: I know that in addition to art history, you’re also considering majoring in psychology, so I was wondering how you think the two work together? Do they overlap somehow?

IS: Usually when I tell people what I want to specialize in, they immediately start talking to me about art therapy, which I don’t necessarily want to do. But it’s a very clear overlap. I was really into it because of this woman that I loved very much, this art historian Siri Hustvedt. She compiled this anthology of art history related articles I read when I was younger [and] really liked. This is the book called A woman watching men watching women and has things by [Susan] Sontag and other art historians discuss the male gaze and art. I re-read that a lot when I was younger and [Hustvedt] is an art historian trained in psychology. I think there are a lot of art historians who have this background, simply because it allows you to look at art and think about human connection in a different way.

MLG: You also worked at Goodrich [Coffee Bar] since your first semester. Why did you decide to work at Goodrich, and what was your favorite thing [about] I’m working on it?

MLG: If you could add one new thing to Goodrich’s menu, what would it be?