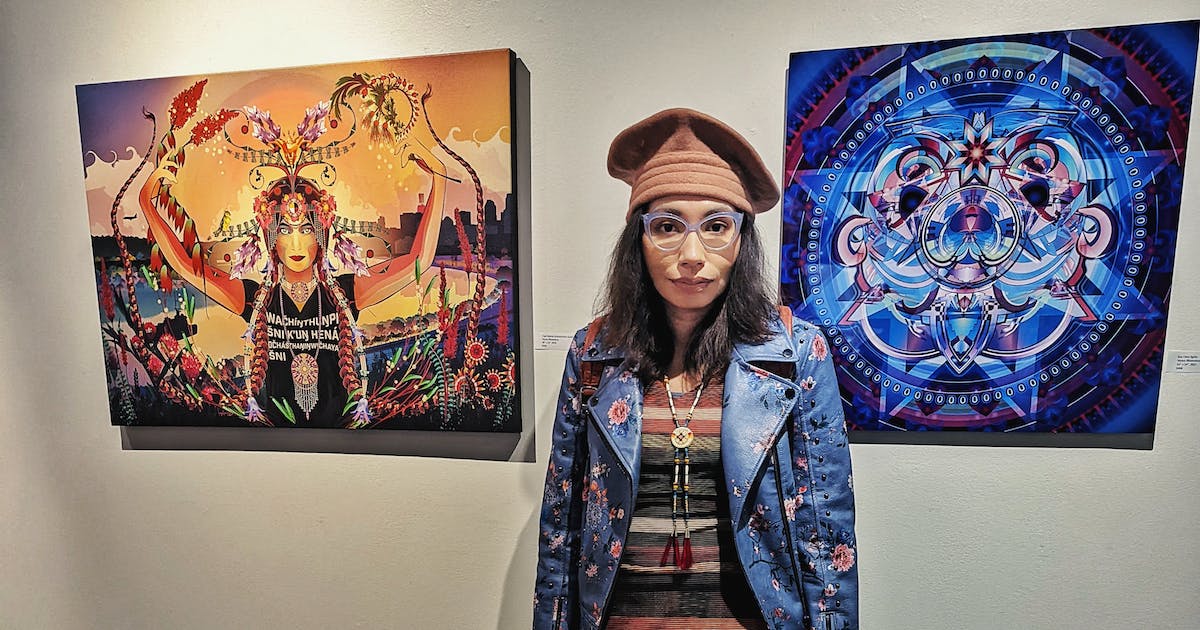 On Saturday afternoon, Marlena Myles sat under a canopy next to her artwork at the Spring into Uptown event in Minneapolis. The sun kissed the sidewalk of a city celebrating the return of warmth during a local exhibition with a series of multicultural vendors and artists.

Myles, a self-taught Native American multimedia artist, exhibited a collection of her creations, all inspired by her Dakota heritage. There were digital illustrations of tigers and foxes on illuminated backgrounds. There were stickers and key rings. I bought a necklace from her with a silver buffalo on a pendant with a bright purple background and a glass etching with the morning star, a symbol of hope and optimism in the Native American tradition.

The St. Paul artist is one of the panelists for Thursday night’s Mary Ann Key Book Club event titled “A Community Discussion of America’s ‘Indigenous Peoples’ History for Young People.” which you can register on the Hennepin County Library website.

For Myles, his works are a beacon to his community and a message to the land beneath our feet right here in Minnesota.

“It’s about teaching people about Dakota history and eliminating ignorance in the world through my art,” she said. “When I was growing up, I really didn’t see anything that said it was a Dakota homeland, so I wanted to create art that would be in classrooms and around the [Twin Cities] then young people see each other, then use the earth as a teacher. Through art – augmented reality – I can put these stories on the exact sites so they can see the world through the eyes of a Native or the eyes of a Dakota.”

When we had lunch a few weeks ago at Hope Breakfast Bar in St. Paul, I explained to Myles why I’m so mystified by artists.

My artistic career peaked in the second year. At the time, my art teacher sent some of our best work to a sister school in Japan. I was lucky to have my stuff on our classroom wall. I thought it was a sign. I’m amazed that there are people on this planet who can create, draw and produce these images when I barely stay between the lines with my 5 year old’s coloring books.

Myles said she learned she had the gift at an early age. In eighth grade, she wrote an essay that detailed her vision of becoming a digital artist – most of her work is done on a computer – and an illustrator. Today, she combines her passion and dedication to the history of her community to produce breathtaking work.

Through my conversations with Myles and other panelists for Thursday’s event — Sharon Day, Executive Director of the Indigenous Peoples Task Force; Katie Phillips, assistant professor of American Indian history at Macalester College; Pearl Walker-Swaney, who is Lakota, Dakota and Anishinaabe and birth worker and yoga instructor; and moderator Ramona Kitto Stately, educator and member of the Santee Sioux Dakota Nation — I learned a lot about an Indigenous community determined to preserve their history.

But his message and the message of “A History of the Indigenous Peoples of the United States for Young People” is also one that centers his present and his future. While the amount of history in this book, told from the perspective of Indigenous authors, is immense and layered, its initial proclamation is equally important.

I want to use the Mary Ann Key Book Club as an active force against the “I didn’t know” answers we’ve heard too often about marginalized communities, their respective histories, and their ambitions. For that, this book is necessary reading.

While I understand how words can be used to tell our stories, through Myles I learned more about using art as a form of activism and connection for a community that has been overlooked.

I don’t always know if these efforts can have a real impact, but then I talk to other people doing this work and borrow some of their hope when my cup seems empty. That’s how I felt when I recently asked Myles about the value of Thursday’s roundtable.

“I hope people realize they have the power to make a difference with the talent they have,” she said. “They may not think about who they relate to or what impact they have, but I think all humans, we all have an impact.”

Myron Medcalf is a local columnist for the Star Tribune and a national writer and radio host for ESPN. His column appears in print on Sundays twice a month and also online.

Nathan Carman, subject of a strange ordeal at sea in 2016, now accused of killing his mother and grandfather to increase the inheritance | app