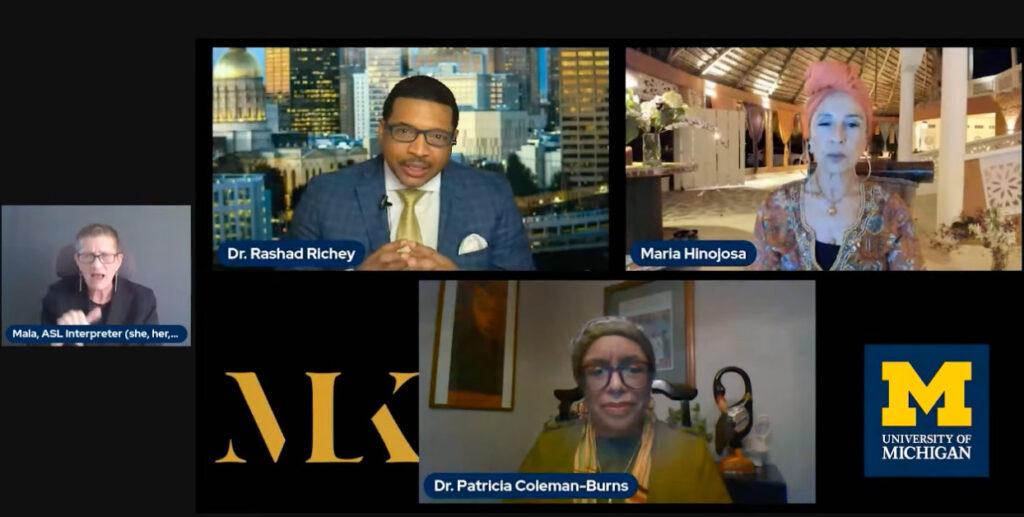 Two award-winning journalists spoke about their experiences with discrimination and encouraged people to challenge injustice at the Rev. Dr. Martin Luther King Jr. 2022 from the University of Michigan.

“Do your research. Understand your part of American history. Understand that we have a long history of struggle ahead of us,” said Maria Hinojosa, who along with Rashad Richey gave the keynote address for the symposium on January 17. .

For the second year in a row, the symposium’s opening event – ​​which usually takes place in a crowded Hill Auditorium – was broadcast live due to concerns about COVID-19.

Now in its 36th year, the MLK symposium is one of the largest of its kind in the country, said Janice Jones, co-chair of the symposium committee and program director for the Office of University Multicultural Initiatives. It runs until early February and includes over 40 individual events.

Jones said the symposium theme, “This is America,” explores two contrasting portraits of the United States. She said the first portrait focused on the country’s ideals, while the other focused on the harsh realities that many people have experienced.

“Our hopes for a prosperous future lie in reconciling these two truths: of what America is and has been,” Jones said. “We can’t become our best selves until we also take care of our worst.”

“The academic excellence of our university is built on a base of diverse people and their experiences. It’s as simple as that,” Coleman said. “The more we are committed to each other as an authentic community, a community that celebrates all of its members and their different histories, the stronger we are as a university dedicated to the betterment of society.”

Hinojosa is a Mexican American journalist, anchor, author, and executive producer of the Latino USA radio show on National Public Radio. She is also the founder, president and CEO of Futuro Media Group, which produces Latino USA, and has reported for PBS, CBS, WNBC and CNN.

“The academic excellence of our university is built on a base of diverse people and their experiences. It’s as simple as that,” Coleman said. “The more we are committed to each other as an authentic community, a community that celebrates all of its members and their different histories, the stronger we are as a university dedicated to the betterment of society.”

Speaking from her home in the Dominican Republic, Hinojosa said she first heard King’s words as a young immigrant growing up in Chicago’s Southside neighborhood. She said she felt invisible at the time and King’s message resonated with her.

“I just remember saying, ‘Well, I can be part of Dr. Martin Luther King’s America. He makes me feel like I can be part of this country, his country,” Hinojosa said. “And for a small child, that changes everything. … It makes you visible. And when you feel visible, you feel empowered.

Hinojosa said that in her work as a journalist, she continues to “fight for visibility”. She said one of the lessons she learned from King was to own the power of her own voice.

One day, Hinojosa’s mother called and was upset because she had heard recordings of children crying after being separated from their parents and placed in immigration detention centers during Donald Trump’s presidency. She then shared with Hinojosa an important part of her story.

Hinojosa was a baby when she, her mother, and her three siblings attempted to move from Mexico to Chicago to join Hinojosa’s father, who had moved there six months earlier. They were detained by US immigration officials at a Texas airport because Hinojosa had a rash. Officials said Hinojosa was ill and tried to persuade her mother to continue in Chicago with her other children and leave Hinojosa behind.

Hinojosa said it was important for people to know their family history. She also said that she and Richey hoped to instill a sense of power in people.

“The democracy of this country rests on you,” she said.

He said America is a “massive social experiment,” with everyone struggling to find themselves in the image of the United States. He said that when people feel disenfranchised, it’s because they don’t see themselves within the American framework.

“If you’re taking a picture with nine friends and you’re the 10th friend in the picture, and the picture looks great…but you’re not looking your best in the picture, well that’s a bad photo because you don’t like how you look in that photo, even though 90% of the people in the photo are great,” he said. “It’s the fight for fairness in the United States from America.

“And we’re constantly saying, ‘No, the photo is fine because everyone looks good in the photo. But what about the minority who don’t? And this is our big fight.

Richey said King fought for true equality — that is, fairness — and pushed for policy change. He said massive inequalities continue to exist today and contribute to unequal outcomes in the United States.

Later, moderator Patricia Coleman-Burns, assistant professor emeritus of nursing, referenced critical race theory when asking Hinojosa and Richey to respond to what she called an attack on diversity, equity and inclusion.

“There is a systems approach to getting this generation of K-12 students to not even acknowledge that the problem (of structural racism) exists,” Richey said.

“If they tell you, teach you and indoctrinate you to believe that no problem exists, that no structural racism is real, you won’t fight it because you can’t recognize it. … It’s amazing how messaging has created a space where the facts are very debatable.