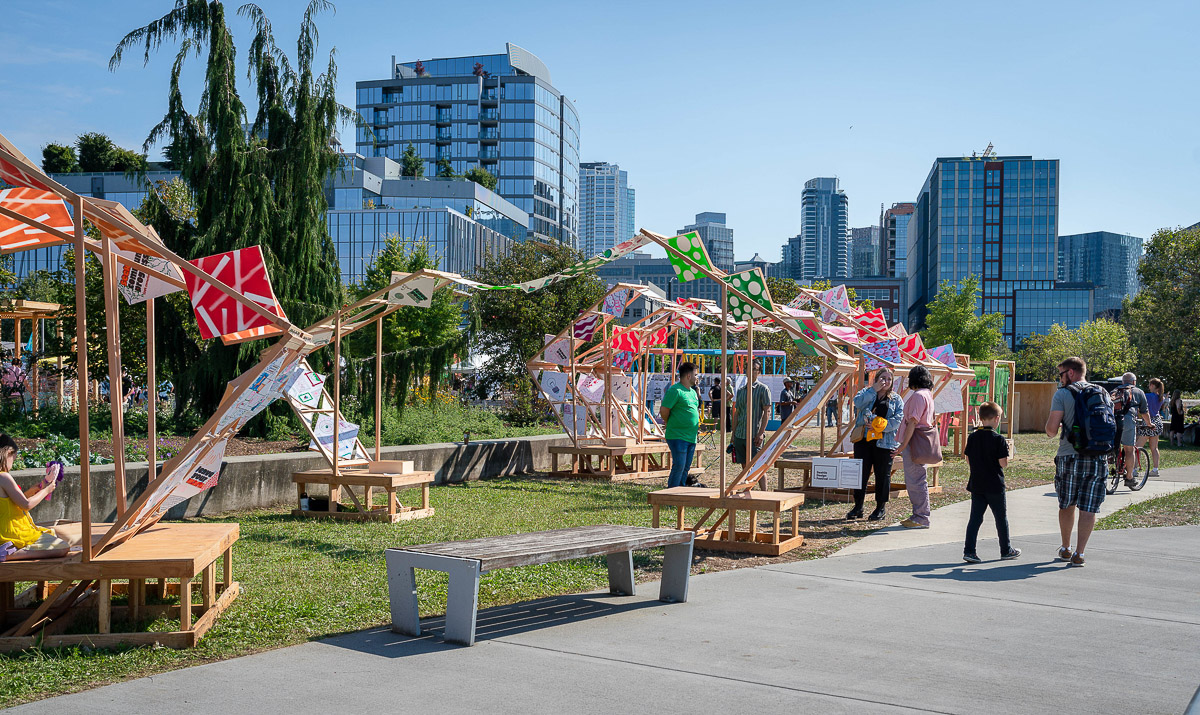 (This article originally appeared on Real Change News and has been reprinted by arrangement.)

On a clear day, looking out from the park at the south end of South Lake Union with its low, arching water feature and the gleaming former Naval Warehouse that is now the Museum of History and Industry (MOHAI), you will see the impressions of the Cascades, blurred by their deceptive distance.

One of those days, a sunny August weekend that had drawn the usual crowd of kayakers, dog walkers and wooden boat enthusiasts, Denise Henrikson stood next to a model of a terraced hill with small wooden boxes depicting handmade cardboard houses and trees. . It was pointed across the lake and towards the mountains: if proportionately tiny inhabitants lived there, theoretically they could enjoy the view.

Meanwhile, Henrikson and co-founder Susan Russell, a former Real Change saleswoman, conceived, planned, and began the slow work of creating the community represented by the model: a sustainable and intentional village in the truest sense, born out of a sense of joint responsibility and legal ownership.

This could be the year, however, that the village transforms from cardboard and pulp to dreams of wood and nails, built by hand and framed by that magnificent mountain view.

By the end of the year, EcoTHRIVE hopes to acquire land in Burien. If he makes the deal, it will be the site of a village of 26 homes — ranging from 350 to 650 square feet — and shared common spaces. Residents will be required to earn a percentage of the area’s median income (AMI) — hopefully close to 40 to 50 percent AMI, Henrikson said — and buy a share in the limited-capital co-op, creating a homeownership model. affordable property that ensures the unit will continue to be affordable for future potential buyers in perpetuity.

Unlike “traditional” affordable housing, residents must have qualifying income to enter, but not to stay. The ownership model means that if their living conditions change, they don’t have to give up their home or their relationships with neighbors.

The idea started as an art project. Russell envisioned art as a way to break down barriers between housed and unhoused people and “replace fear with love”.

Henrikson and Russell approached people – housed and unhoused – with a simple yet profound question: what do you need to thrive?

Hundreds of conversations later, they landed on the concept of the village and decided to make it a reality.

“How difficult could that be? said Henrikson, recalling their precocious naivety.

Financing and building affordable housing differs from building at market rate in critical ways, adding complexity to a process that already must adapt to factors beyond any organization’s control, such as conditions market, supply chains, unit costs, etc.

Land is one of the biggest costs associated with any development, especially in land-scarce areas like the Sound region. Affordable housing developers can sometimes get land transferred or sold below market rate by local governments or other organizations, but they may have to buy the property directly, which EcoTHRIVE does.

Raising money for such an endeavor is difficult, especially when it comes to affordable homeownership models, which may not necessarily qualify for the same funding sources as more typical affordable rental housing.

Even that is not simple. The Low Income Housing Institute says Real Change that it may take up to nine separate funding sources to complete a typical project. Willowcrest, an affordable homeownership project in Renton that opened in 2021, 11 sources required funding to create 12 townhouses, according to Homestead Community Land Trust.

The realities of assembling a project have changed EcoTHRIVE’s target audience. The team wanted to create a community for people in the lowest income bracket – those earning less than 30% of the AMI – but that ultimately didn’t seem feasible.

The organization aims to raise between 1.5 and 2 million dollars in order to complete the sale of the land in Burien before the end of 2022 and to pay for the first improvements to the site. It’s already sunk over $150,000 into design and other “soft” costs, so there’s a sense of urgency to get it done.

But Henrikson remains positive not only for this project but also for the possibility of replicating the model elsewhere.

“I think people will love living here. What we’ve heard the most is that people want community and that makes a big difference in people’s lives,” Henrikson said.

Ashley Archibald is the publisher of Real Change News and a freelance journalist who previously worked for the Santa Monica Daily Press and the Union Democrat. His work focuses on politics and economic development, and you can find it in the South Seattle Emerald, KNKX, and the Urbanist.

📸 Featured Image: The Seattle Design Festival packed Lake Union Park, August 20, 2022, for the block party that kicked off a week of events celebrating the theme of “connection” through design. The photo is attributed to Trevor Dykstra (under Creative Commons license, CC BY-NC-SA 2.0 Licence).