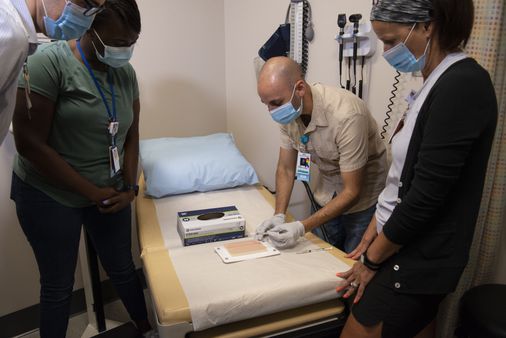 The State Department of Public Health allowed its vaccine suppliers to begin administering injections in this manner on Thursday, and three major Boston institutions — Massachusetts General Hospital, Boston Medical Center and Fenway Health — said Friday they had already trained their staff in the method and started administering the intradermal vaccine.

“We’re all happy now that we have a little more capacity,” said Dr. Jacob Lazarus, an infectious disease specialist who oversees the switch to intradermal injections at Massachusetts General Hospital. “This presents additional challenges, but additional opportunities. This is going to allow us to reach more people and hopefully bend the curve on this.

Although adopted in Massachusetts, the new regime has been controversial elsewhere. New York City has yet to adopt it. Some scientists, campaigners and vaccine maker Bavarian Nordic have raised concerns that the evidence for effectiveness is not strong enough.

But Lazarus said he had read the scientific literature and believed low-dose intradermal injections would work.

“The immune system is particularly active in this layer of the skin,” he said, because the skin is the entry point for many infections.

Another benefit is that people will now be able to get their second doses. Previously, providers only offered the first dose, although two doses are needed to achieve full immunity. The aim was to give at least some protection to as many people as possible until supplies improved.

Now two doses will be provided. Those who received their first dose by the traditional method can still receive their second intradermally.

Being able to call people back for their second dose “is huge,” Lazarus said. “The data we have on immunity is at two doses. We don’t know for sure how protective a dose is.

Monkeypox is characterized by a rash with blisters, fever, headache, sore throat, and swollen lymph nodes. The virus was rarely seen in this country until this recent outbreak, which affected more than 13,000 Americans. In Massachusetts, 243 cases had been reported from Wednesday.

The virus is transmitted primarily through close skin-to-skin contact, and it spreads primarily among men who have sex with men, although anyone can catch it. It usually resolves in two to four weeks, and no deaths have been reported in the current outbreak in the United States.

State vaccination clinics have held training sessions for nurses as many have no recent experience with intradermal injections. The method is mainly used for an old tuberculosis test.

Dr. Cassandra Pierre, associate hospital epidemiologist at Boston Medical Center and medical director of public health programs, noted that intradermal injections require small needles that aren’t used often. But she said there were a lot of them at her hospital. Nurses at Boston Medical Center had already completed their training earlier this month, and the vaccination team was “ready to flip the switch” when health department approval arrived Thursday.

Staff have also been trained and ready to go at Fenway Health, which began intradermal injections on Friday, said Carl Sciortino, executive vice president of external relations at Fenway Health. The intradermal approach “has good evidence” behind it, Sciortino said, but added that such decisions would never have been necessary had the federal government not “messed up the response” to the outbreak.

Unlike other methods, intradermal injections let the vaccinator know if the dose was given correctly, said Lazarus, of Mass. General. “Because this is injected directly under the skin, in most cases it will form a small bubble,” he said. “It’s like filling a very small balloon under the skin. This lets us know that we are in the right layer.

Mass. General vaccinated 75 to 125 people a day, but is not meeting demand, due to limits on the number of appointments he can schedule, Lazarus said.

“There will still be challenges in terms of getting people vaccinated quickly,” he said. “This approach will allow us to continue vaccinating people until August, hopefully until September.”

Currently, Mass. General tries to accommodate people who ask to be vaccinated. With greater availability of vaccines, “I anticipate that we will move to campaigns to try to reach people who might be at risk and not know it,” Lazarus said.

The standard injection method will still be used for people under the age of 18 and anyone with a history of developing keloid scars.

The life of an immigrant in the form of art!