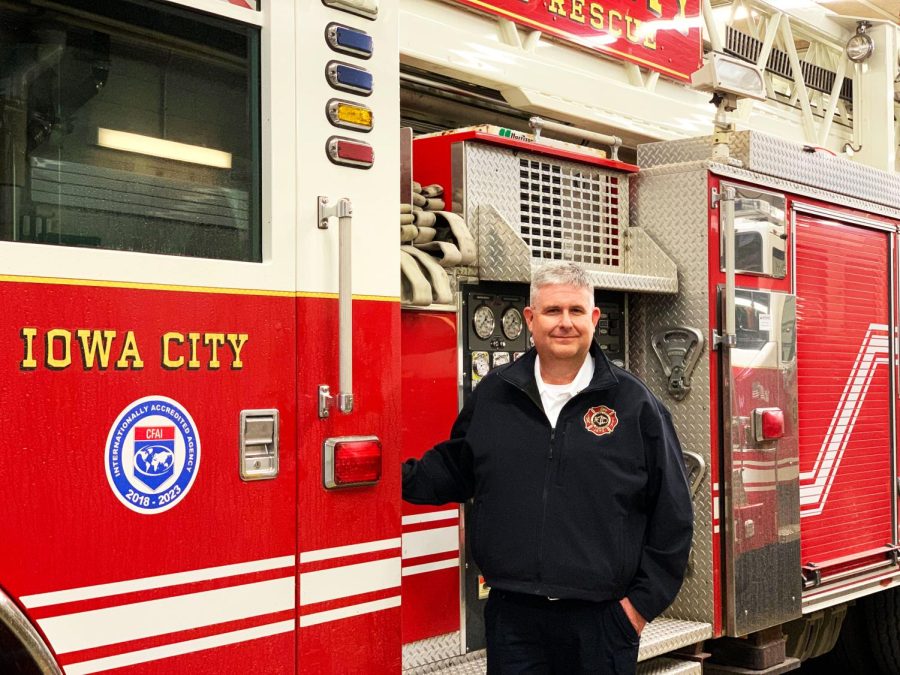 Scott Lyon, who will be the new fire chief for Iowa City, will focus on connecting with the community through his previous experience in growing cities.

Scott Lyon, who entered his new role as Iowa City Fire Chief on Sunday, is ready to use his prior knowledge gained in growing cities to focus on community outreach efforts.

Lyon said he had a lot of firefighting experience, having spent eight years in a number of positions with the Urbandale Fire Department, including its fire chief.

He said he chose to apply for the Iowa City job because it’s a very progressive and growing community with an important history.

“Iowa City stood out from any other organization I would want to work for,” Lyon said. “Diversity and inclusion in Iowa City is something very important to me and my family. It was an easy adjustment.

Lyon said he wanted to focus on diversity and inclusion during his time because his family has many direct ties to diverse populations. His daughter is the refugee resettlement coordinator from Afghanistan, Lyon said, and in his spare time he also works with the center.

Lyon replaces John Grier, who served as the city’s fire chief for the past 10 years and retired in February. The department opened two new fire stations and a training center under Grier.

The new fire chief has a bachelor’s degree in fire service administration and a master’s degree in organizational development and leadership from Waldorf College. He is also a certified paramedic in Iowa.

“Iowa City has a lot of attributes that I’ve enjoyed both professionally and personally,” he said.

As Iowa City Fire Chief, Lyon said he wants the Iowa City Fire Department to continue to be an “outward-looking agency,” with a strong focus on transparency and an element very involved in the community.

He said life safety and risk reduction is the most departmentally important thing a fire department handles on a day-to-day basis.

“Whenever we can get up with members of the community [and] groups and preventing an emergency from happening in the first place is really the gold standard,” Lyon said. “Operationally, this is definitely going to be a priority.

Outreach efforts would come in the form of open forums for the community to provide feedback on issues within their communities, Lyon said, be it the University of Iowa or underserved communities in Iowa City.

Lyon said his primary goal is to acclimate to Iowa City first, and then he could consider potentially changing one of the elements of department operations.

“My goal and responsibility is first and foremost to learn,” Lyon said. “In everything we do, we must be learners above all else and seek to understand why things are the way they are.”

Iowa City City Manager Geoff Fruin, who led the search for the new fire chief, spoke in favor of approving Lyons for the job at a March 22 city council meeting.

“[Lyon] prioritizes these community relationships, not only because this is a public service position, but also because he truly believes that it is these relationships that can have a profound impact on the success of the service. ‘fire,’ Fruin said in a speech to the council.

He said Lyon also indicated that he was someone who cared deeply about the people below him and that was a big influence on the decision.

“He wants to make sure they have every chance to progress professionally,” Fruin said. “He [also] cares about their physical and mental health and wants to ensure that they are in the best possible position to serve this community.

Iowa City Deputy City Manager Redmond Jones II was on the selection committee that interviewed Lyon and the other candidates for the position. Out of more than 15 applicants, Lyon stood out for his authenticity, Jones said.

“One of the challenges for any candidate is trying to get everyone like you and trying to find the right answers that everyone is happy with,” Jones said. “With Scott, I felt it was all about honest and straightforward answers…It wasn’t meant to appease.”

Jones said Lyon’s answers were backed up by his experiences, and those with growing communities like Urbandale were a big plus.

“We’re thrilled to bring him here and he was very excited to get started,” Jones said. “We are really delighted to have him on board.”