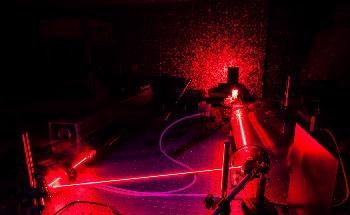 A new concept has been developed which has the potential to aid new instruments in the investigation of fundamental scientific topics such as gravitational waves and dark matter.

He offers a new method of using optical cavities to improve atomic interferometers – highly sensitive devices that use light and atoms to make ultra-precise measurements.

Although difficult to implement itself, the concept presents a method for overcoming the significant technological challenges involved in the search for atomic interferometers operating at extreme momentum transfer – a technique that would allow placing atoms in a quantum superposition over great distances.

The new article, written by Dr Rustin Nourshargh, Dr Samuel Lellouch and colleagues at the School of Physics and Astronomy, describes how the synchronization of the input pulses, to achieve a spatially resolved circulating pulse in the optical cavity , can facilitate a large transfer of momentum without the need for drastic improvements in available laser power.

The study of dark matter and gravitational waves will not only facilitate a better understanding of the history of the Universe, but will also spark new ideas for improving the future sensitivity of atomic interferometers. It will also be relevant for further exploiting atomic interferometry in practical applications, such as providing new navigation tools by enabling increased resilience against loss of GPS signals.

Dr Rustin Nourshargh, a former doctoral researcher at the University of Birmingham and now a scientist at Oxford Ionics, said: “This optical cavity scheme offers a way to meet the immense laser power requirements of future atom-based gravitational wave detectors.”

The concept described in the article relates to a patent application filed by the University of Birmingham Enterprise. A second publication, expected in 2022, will focus on the content of the patent.