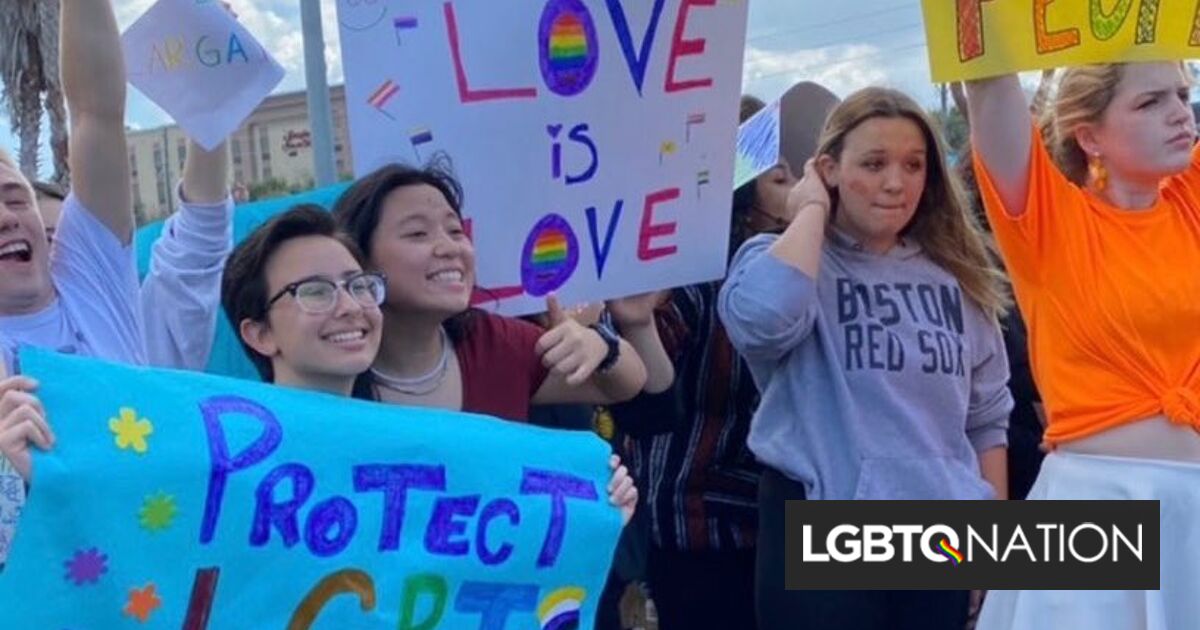 On Tuesday, June 7, a large Broward County Public School Department van in Florida pulled up in front of the Stonewall National Museum and Archives in Fort Lauderdale. In the van, Broward County school officials had filled boxes with children’s books on LGBTQ themes from county classrooms and school libraries to donate to the museum.

While county officials claimed the donations were the result of their attempts to clear shelves and office space for the hoarding of other matters, it’s no mere coincidence that the so-called “rights Parenting in Education” Florida, called by opponents the “Don’t Say Gay” law, was due to go into effect weeks later on July 1.

Passed primarily by Republicans in the state legislature and signed into law, the new law bed in part:

“Classroom instruction by school staff or third parties about sexual orientation or gender identity may not take place in kindergarten through grade 3 or in a manner that is not appropriate to the age or development of the students in accordance with state standards.”

So where did the Broward Country School District donate its children’s books on sexual orientation of heterosexuality or cisgender gender identity: Books like the classic Cinderella and Sleeping Beauty or most common how to get a girlfriend (a step-by-step guide written for boys aged 5-6)?

Of course, school officials have not scoured its book collections to prune its collections of preschool books that deal with or involve heterosexual and cisgender characters, themes, or imagery since, as hypothesized the implies, heterosexuals do not have a sexual orientation and cisgender does not represent a gender identity.

School contexts, as reproductions of society at large, operate on an overarching system of heteronormativity and heterosexism in which “heterosexual” is promoted as “love” while “homosexual” and “bisexual” are reduced and considered only as “sex” and “transgender” means “sick”. And together, “LGBTQ” represents in the public imagination the image of pedophiles, predators, recruiters, and in the common language of the political right, “groomers”.

Since January 2021, Education Week has found that 42 states have either introduced bills in their legislatures or taken other actions that would ban the teaching of critical race theory or restrict how educators discuss racism, sexism and LGBTQ issues in the classroom. Sixteen states have already imposed these restrictions.

Florida has positioned itself at the tip of the spear to cut and bleed to death school materials on the topics of race, gender and sexual identity.

For example, the Florida House has imposed new restrictions on how race is discussed in schools, colleges and workplaces. The bill went to Governor Ron DeSantis’ office for approval.

A labeled measure “Individual Liberty” was recently passed by a party-line vote; he connects with DeSantis’ demand for a “Stop WOKE” law, which diminishes what he calls the liberal ideology that impacts the teaching of history in schools and circulates in life training. diversity in business.

Currently, too, states are proposing laws to restrict transgender rights in sports or access to certain health services, and others to limit overall LGBTQ protections, especially in schools.

Before signing the bill, DeSantis told a press conference that teaching kindergarteners that “they can be whatever they want to be” was “inappropriate” for children.

“It’s not something that’s right in every place,” he said, “but especially not in Florida. We’ll make sure parents can send their kids to school to receive a education, not indoctrination.

Since Republicans have no real policy positions to offer, they are digging up all the hateful and terrifying stereotypes they can muster to strike fear into the hearts and minds of potential voters. By banning discussions of race, gender and sexuality from classroom discussions, they are initiating a culture war for their own political ends.

What these Republicans are doing amounts to a form of intimidation. And we must hold those state lawmakers who ban discussion of LGBTQ and racial topics in classrooms accountable for this further marginalization and the potential harassment and violence that can result.

Several forms of social oppression have come together in an extreme way in this growing number of laws, mainly heterosexism, cissexism, racism and adultism – the latter being defined by John Bell as “behaviors and attitudes based on the assumption that adults are better than young people and that they have the right to affect young people without their consent”.

One of the litmus tests by which a society can be judged is how it treats its young people, as this opens a window projecting how that society functions in general.

In an adult society, adults make the rules, with little or no input from young people, which they force young people to follow. Even the terminology our society uses to refer to youth betrays a hierarchical power dynamic.

For example, we refer to young people as “kids”, a term originally applied to kids. By labeling the young as farm animals, adults have the opportunity to control and maintain unlimited power over humans. (We must treat and respect animals better than we also do.)

Of course, parents and other adults have the inherent ability responsibility to protect young people from harm and hurt by others, and to teach them how to live and function in society within our ever-changing global community.

We as a society, however, must draw a line between protecting control, teaching oppression, and minimal and fundamental repression of what Herbert Marcuse terms of “over-repression” (that which goes beyond what is necessary for the protection of the individual and the proper functioning of society, and enters the realm of domination, control and oppression).

Adultism, heterosexism, cissexism, racism and all other forms of oppression, individually and in combination, operate as a continuum from the subtle to the extreme.

With respect to adultism, this continuum includes adults ignoring or neglecting young people, statements such as “children should be seen and not heard”, “You are too young to do this” and “Just grow up”, to “When you’re living in my home you are my rules”, circumscribed or qualified love, corporal punishment, expulsion from the home, sexual assault and other violent acts.

Withholding important age-related information across all grades and across the curriculum can be seen as a form of excess repression. I see it as a form of child abuse.