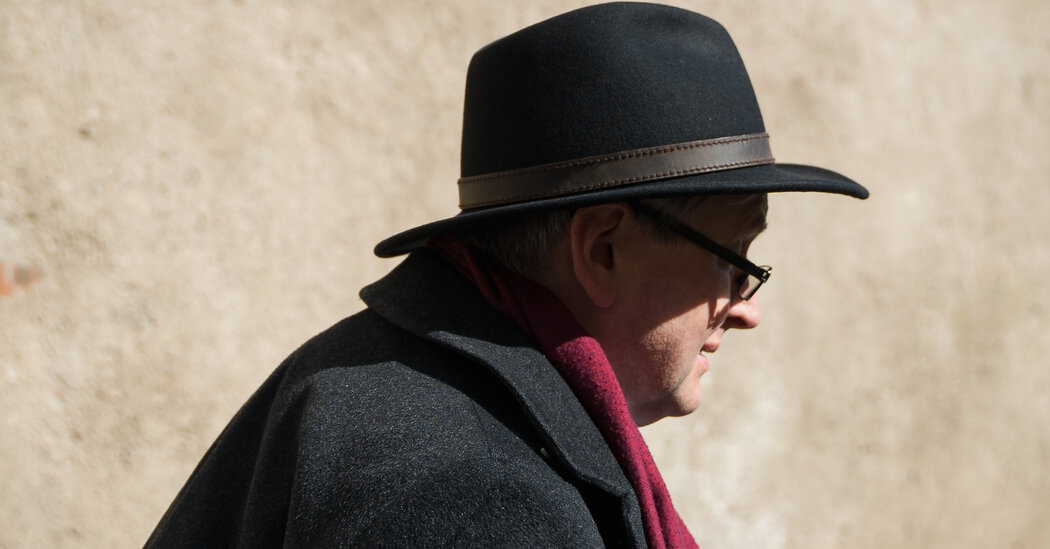 The scenes of German and Soviet soldiers overrunning Ukraine in Sergei Loznitsa’s “Babi Yar: Context” are inevitably reminiscent of the current Russian invasion of the country. For more than two decades, Loznitsa, a Ukrainian filmmaker raised in the Soviet Union, has chronicled the past and present in Ukraine and Russia by revisiting historical events and depicting everyday life grappling with war and empire.

“Babi Yar: Context,” a documentary that debuts Friday at the Film Forum, recreates Ukraine during World War II through startling archival footage from kyiv, where the Nazis murdered thousands of Jews at a single site, the ravine of the film’s title. In the fictional satire “Donbass,” which opens April 8, Loznitsa reenacts bizarre and disturbing episodes of Russian incursions into eastern Ukraine in the 2010s.

Loznitsa, 57, recently made headlines when he left the European Film Academy over a statement by the group about the Russian invasion which he deemed “toothless”; then he returned to the front page after being expelled from the Ukrainian Film Academy for opposing the boycott of Russian filmmakers. Even Ukrainian President Volodymyr Zelensky spoke during a March 27 interview with Russian journalists, saying of Loznitsa: “He is an artist who supports Ukraine.”

Loznitsa sees the conflict as “a European war, not just a Ukrainian war”. Speaking in Russian, with his production partner Maria Choustova-Baker as interpreter, he discussed his films and current affairs during a video chat from Berlin, where he lives. These are excerpts from our conversation.

Where were you when the Russian invasion started?

Vilnius. I’m finishing a new movie there. I woke up to a text message from my friend, Russian filmmaker Victor Kossakovsky. He said, “Forgive me. What a nightmare.”

Is it true that you helped your parents get out of Ukraine?

Unlike many others, I actually believed what US intelligence was reporting and what President Biden was telling the world [that Russia had planned to invade]. I even guessed the dates correctly. My friend, Ukrainian co-producer Serge Lavrenyuk, helped me remove my parents [from Kyiv, three days before the invasion started]. This war is a huge shock to millions of people. My father was born in 1939, and he remembers his childhood and those horrors very well. My mother was born in 1940 and also remembers all the movements during the war. Now they are [in their 80s] and it’s the same circumstances!

How would you compare the current situation with the story of “Babi Yar: Context”?

The fundamental difference is that at the time it was a fight between two totalitarian regimes. There is now a totalitarian regime fighting with a country that aspires to independence. At the time, major countries like the United States and the United Kingdom also participated in the war. But today, the majority of countries that have the potential to stop this war have chosen this immoral position of spectator, of non-interference. And the politicians of these countries have put their citizens in this situation of immorality, because the only choice the citizens have is to watch online, in real time, how city after city of Ukraine is being destroyed.

You could say that Putin is winning on the international stage right now, because the politics of world leaders are based on fear. They are not even capable of taking a rather neutral step by introducing a no-fly zone over Ukraine.

Some fear that such involvement could lead to escalation and nuclear conflict.

I don’t think that’s a valid excuse. First of all, do these politicians have any guarantee that in case – heaven forbid – Russia manages to swallow Ukraine, they will not use nuclear weapons? Putin had no valid reason to invade Ukraine. So why do you think he would need a valid reason to use nukes? This can only be stopped by force. Sooner or later, NATO will have to get involved, and the longer it waits, the bloodier will be the resolution of the conflict.

“Babi Yar: Context” does not shy away from addressing the role of people in Ukraine in the massacre of Jews. Have you come across any reviews on this?

There were people who criticized me in Ukraine for making this film the way I did. The contemporary situation is completely different. And it is absolutely obvious that whatever Putin is talking about, that there are Nazis in Ukraine, makes no sense. At the same time, this question of collaboration in history is very, very painful in Ukraine. Yes, I was strongly criticized.

Do you have relatives who were affected by the Babi Yar killings?

In “Donbass”, you take a different approach: dramatize events based on real cellphone videos. Why this form?

First because I was hypnotized by these amateur videos that I found on the internet. Second, I wanted to create this grotesque form because I needed something to hold the film together and I didn’t want to use a single protagonist or a group of protagonists. I wanted you to observe idiocy in all its forms. This wonderful film by Luis Buñuel, “The Phantom of Liberty”, also uses this method.

One of the scenes shows Russians moving artillery from place to place after firing at a civilian bus.

Yes, the most important thing for them was not to be identified. That’s why they had to move from place to place. And the murder that comes after [in the film] it’s because they wanted to get rid of the witnesses.

Yes, in fact, these criminal gangs that took power in 1917 and hold power today, there is no difference between them and any other mafia. Before that, the mafia covered itself with Soviet ideology. Nowadays, there is no longer any ideology. It’s just mafia.

Yes, it happens all the time. This is the technique that is commonly employed by Russian television, and surveillance groups have managed to identify actors who play the role of witnesses in different locations. So they almost have a cast of actors that they employ to fabricate fake news. There was a notorious TV report around 2014: a story about how Ukrainians crucify a Russian boy. This report has been analyzed by professionals who have proven every element to be wrong, all staged.

When you grew up in the Soviet Union, was there a time when you were disillusioned?

The thing is, the whole Soviet Union lived in this kind of dual reality or multiple realities, and everyone was aware of it, but very few people questioned it. But I was a very bad student. [Laughs] I was a very good student in terms of academic results, but I always wondered about this double reality and asked myself: “Where am I and what is going on? »

Today, this criminal group [in power in Russia] got together. They have repaired the economy of the country a little. They improved their military strength. And now they are ready to conquer the world again. [Laughs]

Your movies these days can feel like prophecies because of their familiar images of war.

The issues I talk about in my films have been around for a long time. That’s why I wanted to do “Mr. Landsbergis” [a new film about Lithuania’s successful bid for independence from the Soviet Union in 1989-91]. Because there is this unique, fantastic and colossal experience of fighting against the Soviet Union and winning.