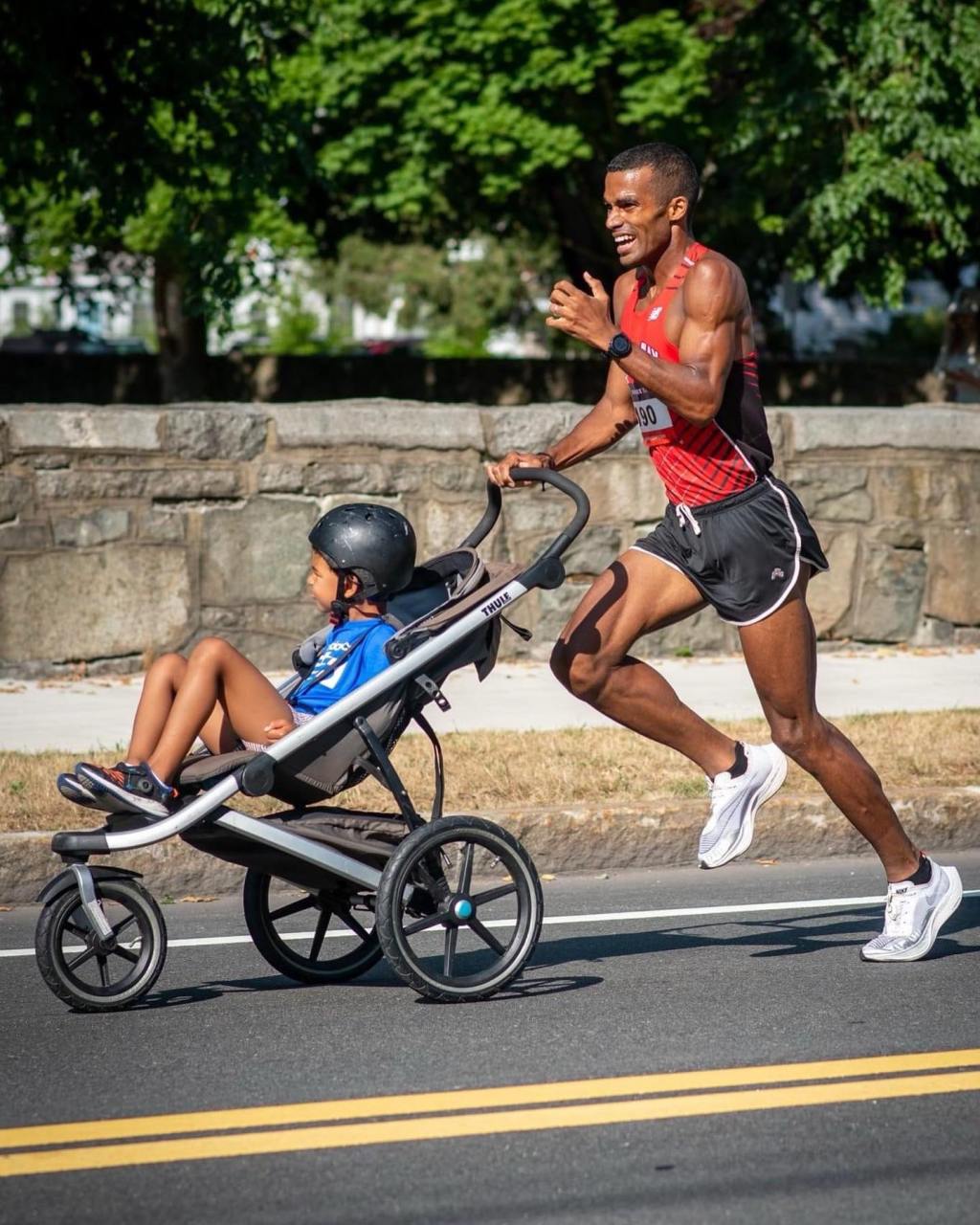 At the start of the race, Ruben Sanca was focused on Guinness.

Not the beer, though considering he was about to sprint in 82-degree heat, that wouldn’t have been a bad plan.

No, the 35-year-old Salisbury resident has pushed himself to the limit in an attempt to set a Guinness World Records mark for the fastest mile by a person pushing a stroller.

Unofficially, Sanca, who pushed her 5-year-old son Greyson, set a world record on August 7 during the 30th annual High Street Mile in Newburyport, although Guinness officials will not decide for weeks whether his time of 4 minutes, 32.2 seconds will be recognized as such. The recognized record of 4:41.83 was set on a track by a California man pushing his daughter on March 8.

Sanca roared down the High Street, clutching the stroller with her right hand, her outstretched arm and her flailing legs.

“I’m competitive,” said Sanca, a four-time All-American at UMass Lowell who graduated in 2009. “But I knew it was going to be really tough. During the race, when I got to the halfway point, I was like that I think we can run in about 4:20 But then I felt a little adjustment in my left quad It definitely changed my stride a bit I wasn’t able to kick as well strong in the last quarter mile.

Running a mile in under five minutes is elite. Add to that the fact that he had to push the helmet-wearing Greyson, who is tall for his age and weighs 55 pounds, and Sanca’s run through Newburyport on this sweltering morning is another impressive level. One last thing: the stroller weighs 25 pounds.

Sanca, who had her race filmed by a friend, submitted the details and the video to Guinness, which is headquartered in London.

“It was kind of like a fun thing for us as a family,” he said. “I knew the record, but for me it wasn’t like I wasn’t breaking it, I wouldn’t feel bad about it. It was kind of a small challenge. I didn’t think much about it- thing.

Even though the previous record was set on a track, Sanca believes her record should be recognized. If not, look for Sanca and Greyson to attempt a second world record attempt, this time on a track.

Greyson was unimpressed with their fifth place finish.

“He said, ‘But we didn’t win.’ I think now he understands. It’s starting to sink in,” Sanca said.

After her achievement, Sanca received a lot of praise, especially from women who were inspired by her decision to run while pushing a stroller.

“It was probably one of the hottest races I’ve ever done,” he said. “It was so hot. I’m just glad people found the story inspiring and motivating.

Sanca didn’t grow up as a runner. Far from there. Originally from Cape Verde, he had asthma attacks “all the time” as a child. His respiratory issues became less of a hindrance soon after his family moved to Boston when he was 12. Sanca, who lived in Dorchester and Roxbury, attended John D. O’Bryant High School, where he came to the attention of UMass Lowell. and track coach Gary Gardner.

Sanca became one of the great runners in program history under Gardner, winning three individual New England titles. In 2012, he represented Cape Verde in the 5,000 meter race at the London Olympics, although an injury which later led to knee surgery hampered his run. He felt lucky just to finish his round.

Sanca and his wife, Lauren, live with Greyson a few miles from the Atlantic Ocean. He first started pushing Greyson on his errands to get him to take a nap. As Greyson got older, Sanca wanted her son to enjoy the outdoors. Soon they were off on 10-mile practice runs together.

“Go faster! Go faster!” Greyson was screaming from inside the stroller.

Dad obliged. In April, Sanca made the impulsive decision to take part in a four-mile race near his home in Salisbury with Greyson. There was no time to stretch or warm up. At the end of the race, Sanca was amazed to learn that her pace was 5:27 per mile.

“Then I said, ‘I wonder what I could do if I was a little better prepared?’ ” he said.

He signed up for a 5k race in Salisbury and the Sancas were comfortably ahead – until they took a wrong turn and had to settle for fourth.

Sanca works for her alma mater, as the director of student life and welfare at UMass Lowell. Being active is important to him, but he may have to wait two months to find out if he and Greyson’s magical walk is recognized as a world record.

Who knows? Maybe if he gets some good news, he’ll open a beer to celebrate. A Guinness, of course.

Is Roger Federer's victory at the 2017 Australian Open the biggest change of form of all time?