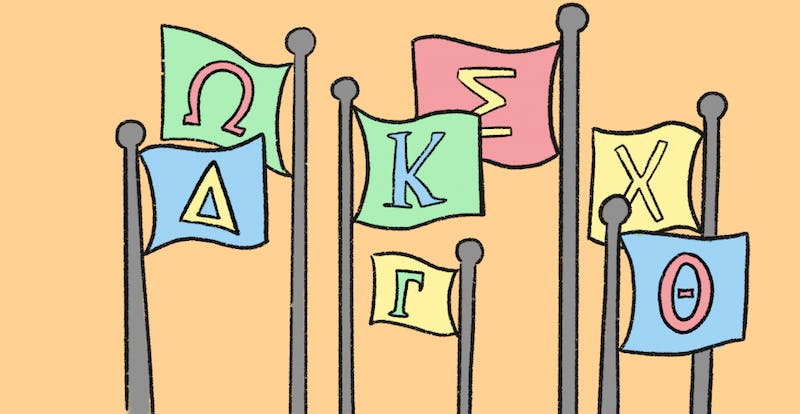 Sorority recruiting season brings a wave of excitement and new opportunities for those interested in joining a sorority. For some Ohio University students, joining a sorority fits their interests and schedule, but there are others who don’t find it appropriate for themselves.

Official sorority recruiting begins Sept. 9 and ends Sept. 18 for people who signed up for the Women’s Panhellenic Association, or WPA, Fall Recruitment. Students who wish to join sororities may have always wanted to be a part of Greek life or have recently made the decision.

Megan Collings, an indecisive freshman, eagerly awaits the start of recruitment. Originally from Chicago, Collings came to OU without knowing anyone. Being from out of town, Collings said she craves the sense of community that often comes with being a member of a sorority.

“I feel like a sorority will give me the opportunity to make a ton of friends and just have a home away from home,” Collings said.

Collings didn’t always intend to rush. It wasn’t until her first year of high school that she started thinking about it.

“Since then, I’ve wanted,” Collings said.

Collings said her mother’s work with the Alzheimer’s Association and her own experiences with charitable giving encouraged her to join, alongside the community aspect. Her mother didn’t attend a sorority, so she hadn’t considered the option until her high school friends started discussing it.

“It was more of an added bonus,” Collings said. “I didn’t study sororities much because I didn’t want to go into it with a bias or anything. I just heard Greek life is fun here.

In addition to the opportunity to make friends, the relatively laid-back nature of OU recruiting also appealed to Collings. With only ten chapters, OU’s WPA is dwarfed by that of some larger schools, especially schools in the Southeastern Conference.

“It’s colder than ‘Bama (University of Alabama),” Collings said. “It was definitely a good reason – I didn’t want it to be a crazy thing.”

Tori Noon, a graduate in management information systems and business analytics, is vice president of recruiting at WPA. Noon said there is a lot of planning and events that go into the recruiting process. On September 9, there is a potential new member, or PNM, orientation this Friday evening. The following day is known as the Welcome Round, a day-long introduction to all houses.

“What’s going to happen is that all of the women who go through the process will go to the 10 chapters that we have here,” Noon said. “So ultimately the PNMs will rank the houses they prefer from 1 to 10, and then the houses will also rank the PNMs.”

On September 11, PNMs go through the Philanthropy Round, which means they can return up to eight houses that invite them back. The PNMs then re-rank their top sorority picks and the houses will do the same for the PNMs.

“It’s like when you swipe on Tinder, to match with someone, you both have to swipe right,” Noon said.

Sisterhood Round and Preference Round are the next stages of recruitment and require PNMs to narrow down their top picks of sororities they wish to join.

“And then (there’s) Bid Day, which is when they get their offer and that means they’re not initiated yet, but they’re officially members of that chapter,” Noon said.

In her post, Noon said she was trying to make the recruiting process more accessible for incoming NMPs.

“We’ve added our pronouns to our badges and things like that since I’ve been in this position,” Noon said. “One of my main goals is to make recruiting more accessible.”

Participating in pan-Hellenic life does not appeal to everyone. Ariel Williams, a sophomore in plant biology, is not in a sorority and had no intention of joining one when she arrived on campus.

“I was never a sorority type person,” Williams said. “I never really wanted to join Greek life – I just wasn’t interested. I don’t know, I’m not really into it.

Williams attributed her lack of interest in joining a sorority to her upbringing. As an only child, she said being around so many people seemed overwhelming and deterred her from looking further into the recruitment process.

She said the history of many sororities also kept her from joining, as she said she knew there had been discriminatory practices in the past. Additionally, Williams said the collaboration of WPA activities with Interfraternity Council activities has diminished the appeal of getting involved.

“They (the sororities) are usually involved in some of the fraternities — they do joint things,” Williams said. “It’s a no for me. It’s a total no.

Regardless of opinions surrounding Panhellenic life, it is always an opportunity for women to make new friends and create lasting relationships.

“Just watching PNMs make these connections and experience this joy for themselves, it makes my heart happy,” Noon said.