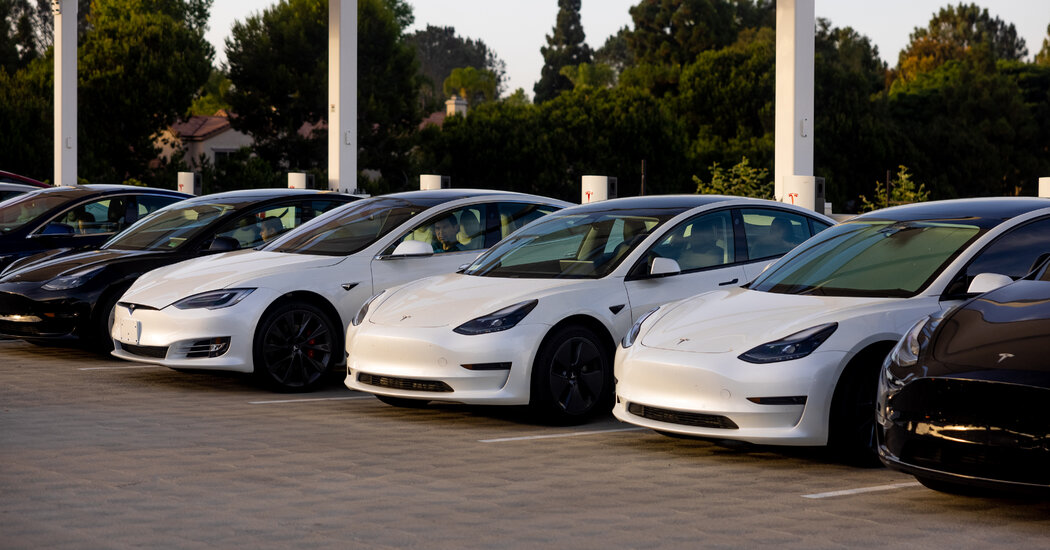 Tesla said on Wednesday its profit had increased more than sixfold from last year to $5.5 billion, the highest total in its 19-year history, as sales grew further, particularly in Europe and the United States. China.

But the automaker has warned that supply chain issues resulting from the pandemic will again limit production throughout this year.

“Our own factories have been operating below capacity for several quarters as the supply chain has become the primary limiting factor, which is expected to continue through 2022,” the company said.

Elon Musk, chief executive of Tesla, said the company won’t announce any expansions to its product line this year so it can focus on ramping up production.

Adding models as demand exceeds supply “wouldn’t make sense,” he said on a conference call with analysts. “If we introduced new vehicles, our total production would decrease.”

Tesla said it is working on its Cybertruck pickup, which is expected to go into production in 2021.

The company repeated a previous forecast that it expected sales to grow by around 50% per year on average over the next few years. Mr Musk said Tesla would grow “comfortably above” that figure in 2022.

Tesla made progress last year despite an industry-wide shortage of computer chips. The company was able to mitigate the impact of the shortage by switching to more readily available chip types. Tesla can make such a change because its software allows its cars to run on a wider variety of chips than vehicles from other automakers.

“The shortage of chips is always a problem,” Musk said on Wednesday. “We expect to be chip limited this year. This should ease next year.

In addition to its established factories in Fremont, Calif., and Shanghai, Tesla needs production from the factories it is building in Texas and Germany to sustain its rapid growth.

“We aim to ramp up our production as quickly as possible, not only increasing production at new plants in Austin and Berlin, but also maximizing production at our established plants in Fremont and Shanghai,” the company said Wednesday. “We believe that competitiveness in the electric vehicle market will be determined by the ability to add capacity through the supply chain and ramp production.”

How the Supply Chain Crisis Unfolded

The pandemic triggered the problem. The highly complex and interconnected global supply chain is in upheaval. Much of the crisis can be traced to the Covid-19 outbreak, which triggered an economic downturn, mass layoffs and a halt in production. Here’s what happened next:

A reduction in shipping costs. With fewer goods being made and fewer people with paychecks to spend at the start of the pandemic, manufacturers and shipping companies assumed demand would fall sharply. But this turned out to be a mistake, as the demand for certain items would increase.

The demand for protective equipment has increased. At the start of 2020, the whole planet suddenly needed surgical masks and gowns. Most of these products were made in China. As Chinese factories ramped up production, freighters began delivering equipment around the world.

The demand for durable goods has increased. The pandemic has shifted Americans’ spending from eating out and attending events to office furniture, electronics and kitchen appliances — mostly purchased online. Spending has also been encouraged by government stimulus programs.

Mr Musk said Tesla would likely start scouting locations for a new vehicle factory by the end of the year.

The company said it hopes to start shipping Austin-made Model Y compacts. Production at the plant near Berlin, which was due to start in late 2021, has been delayed due to disputes with German authorities over permits.

Tesla’s 2021 revenue included nearly $1.5 billion earned from the sale of regulatory credits to other automakers, down slightly from the previous year.

Berrettini banking on recent form against Nadal in semi-final