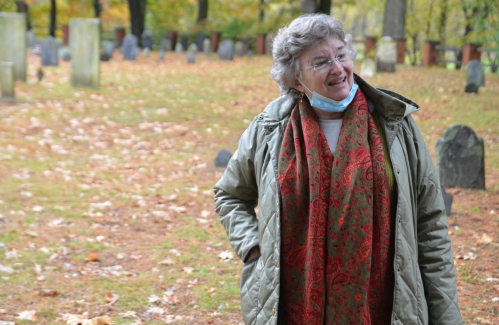 DEERFIELD – History buffs came to the Old Burying Ground at the end of Albany Road this weekend to admire the rarely recognized beauty of gravestone art.

The historic town of Deerfield has hosted gravestone art tours, emphasizing the craftsmanship of Solomon Ashley, a late 18th-century gravestone sculptor from Deerfield. Led by a guide, tour groups walked through rows of tombstones in varying conditions, periodically stopping at different groups to learn about the stories of those buried at the cemetery and the art that adorns their place. rest.

According to Ellen Zale, an educator at the Deerfield Historical Museum and tour guide, the people of Deerfield began burying their dead at the Old Burying Ground in the early 1700s and stopped when there was no room left. Gravestones of Revolutionary War soldiers, staunch Imperial loyalists and others are plentiful. At the same time, however, Zale said the site harbors a host of unknown remains.

“There are a lot more people who are here, I could see, who are not marked,” she said. “I wonder what we would find if we dig in here.”

Many of those who were known in Zale Cemetery and the rest of Historic Deerfield were not just Ashley clients, but family members. For example, the site still has intact tombstones for Ashley’s parents, Jonathan and Dorothy Ashley, as well as smaller stones for the family’s multiple deceased children. Even Solomon’s brother, also named Solomon, was buried there after he died in infancy.

No matter who the client was in life, their Ashley-carved tombstones all shared aesthetic similarities. Ashley’s iconic designs included things like abstract anthropomorphic figures and slanted “1’s” to start dates.

Those present manifested a fascination with both art and history which has stood the test of time. From Zale’s perspective, the reason for this interest was simple.

“I think it’s always worth learning about the past,” she said.

Tupac Shakur's life, a legacy to be the subject of massive exposure