Gulf Photo Plus (GPP) presents its first major photo exhibition devoted to feminism and the politics of the body in the Arab world (March 8 – April 15). Titled Swallow That! Arab Women and Body Politics, it features the work of photographers Lara Chahine and Reem Falaknaz. The opening coincided with International Women’s Day, which also took place on March 8. The exhibition presents more than 40 works, including photographs, digital media and video installations.

Chahine and Falaknaz are alumni of the Arab documentary photography program, which is supported by AFAC (Arab Fund for Arts and Culture), the Prince Claus Fund and the Magnum Foundation. The works presented explore the pathologization of women’s bodies, where political absurdity, visual surrealism and humor converge.

Drawing on the collective experience of femininity, Chahine and Falaknaz embrace performance art, sometimes becoming the subjects of their own work. In Bless Your Beauty, Lebanon-based photographer Chahine explores the pressure to achieve “sacred” beauty ideals at all costs – physical, emotional and financial.

Will Smith apologizes: I was out of place and I was wrong

As part of her first major photo series, her work covers personal stories of women in Lebanon told during and after the October Revolution, the pandemic, and the explosion in Beirut. The photographer documents and presents the busy urban landscape that produces these stories. (The October 17 protests are a series of civil protests taking place in Lebanon).

In If a Hymen Breaks and No One Hears by Falaknaz, the UAE/Oman-based photographer showcases research into hymen repair remedies, documenting conversations with muftis, herbalists, sheikhs , doctors and wizards. The end product of Falaknaz is a digital media project that appropriates internet culture, print media, literature and oral history, to shed light on the secret ways women use to navigate social practices. religions, herbalism, witchcraft and medical malpractice.

Swallow that! weaves stories where the clinical or the scientific, the grotesque or the corporeal, the divine or the occult, coexist like contemporary reflections on a post-internet, Arab feminism.

Rama Ghanem, curator of Gulf Photo Plus, says: “In recent years, young Arab female photographers have been doing more sophisticated work in the region; it’s time we made space for them, and for the important conversations that emerge, once we talk about the lived experiences of women. 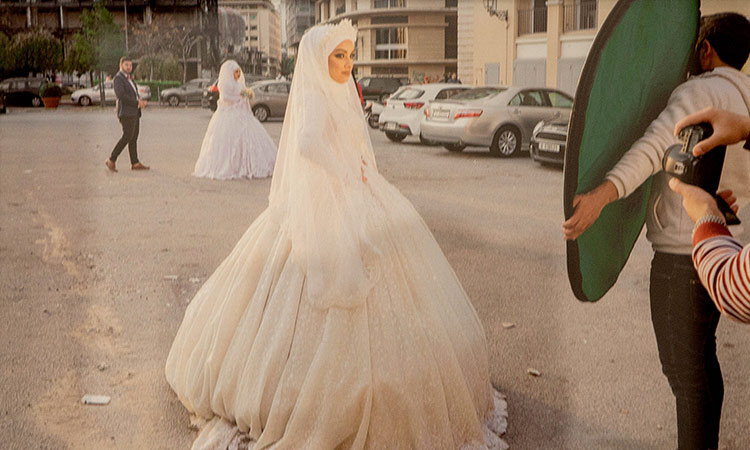 The Gulf Photo Plus exhibition is devoted to feminism and the politics of the body. Kamal Kassim / Gulf today

“Because Arab womanhood does not exist in a vacuum, we inevitably start talking about political decadence, social, economic and environmental justice, refugee status and migration, religious freedom and other issues, when we let’s address women’s issues.” She adds, “I also felt there needed to be a different approach to feminist work that is distributed and exhibited in the region. The work can be serious in its influence, yet delivered in an accessible, fun, and light-hearted way.

“I would like to challenge audiences with work that is both humorous and critical, ultimately delivering a show that is entertaining and biting, witty, charged, emotional and intelligent.” The term “body politics” was first used in the 1970s during the women’s movement in the United States. It grew out of feminist politics and abortion debates.

“The personal is the political” became a slogan that captured national struggles for equal rights in the home and in gender relations. It emphasized a woman’s power and authority over her own body.

Body politics involves fighting against the objectification of the female body and violence against women and girls, and campaigning for women’s reproductive rights.

Mohamed Somji, founder of GPP, said that “it is important for GPP to provide a space for artists to present works that speak to the social problems faced by the people who live in the region and in this case, the women who are forced to look a certain way to conform to capitalist narratives and patriarchal societies. We hope that we can contribute to healthy discourse and debate around these issues.

Chahine (b. 1998) is a self-taught photographer from northern Lebanon and currently lives between Beirut and New York. Focusing first on academia and earning a degree in political science, it was only much later that she considered photography alongside politics. She learned to click on a shutter and visually convey her surroundings during the October Revolution in Lebanon. Her project under the Arab documentary photography program, Bless Your Beauty, is her first long-term documentary project and the starting point of her career as an image-maker.

Falaknaz’s work documents the social and physical landscape of the UAE and its people. In 2014, she participated in the Arab documentary photography program. His commissions include the National Pavilion of the United Arab Emirates at the 2016 Venice Architecture Biennale and the 2020 Lahore Biennale. Ghanem (b. 1998) is an artist and curator based in Dubai. Her practice spans research-based performance and digital media. She holds a BFA (hons) from Goldsmiths, University of London. She is a member of the ninth cohort of the Salama Bint Hamdan Emerging Artists Fellowship. She currently manages exhibitions at the GPP.

GPP is one of the leading photography centers in Dubai. Based on Alserkal Avenue, it is a community organization that cultivates visual practices locally and internationally, with educational photography workshops, exhibitions, art programs, events, print services tip, as well as other specialized resources. Its collections of curated editions support the work of MENASA photographers, and editions of the current exhibition are also available. Viewers can learn about shopping at GPP or visit the GPP website.

Mohamed Salah victim of racist insults during the World Cup play-offs, with lasers in his eyes | world news