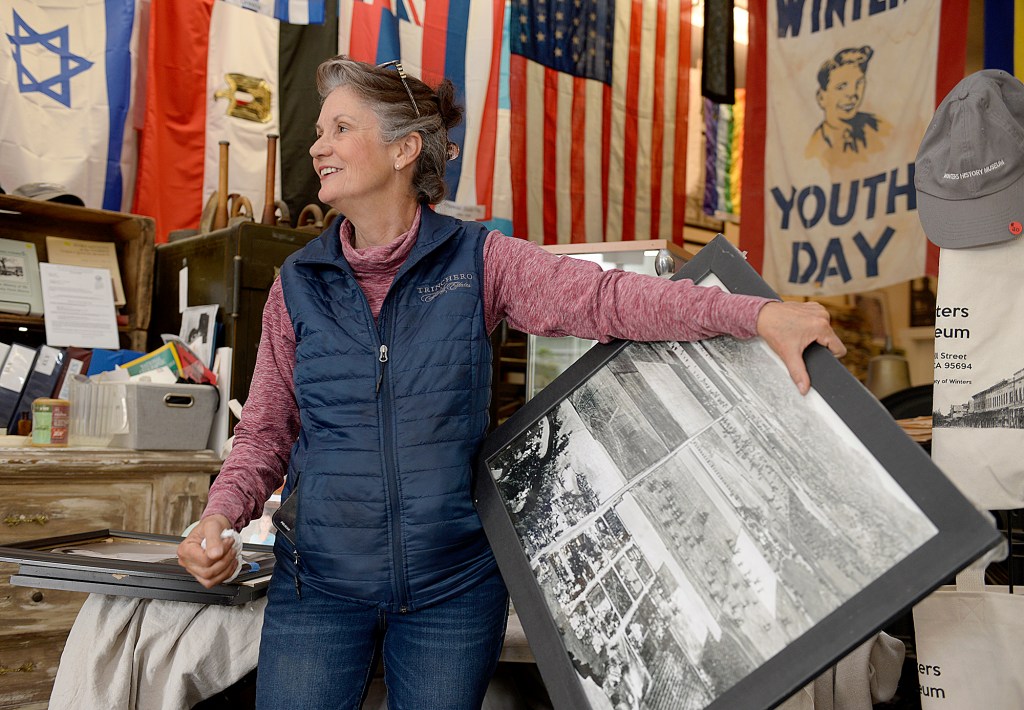 Lake Berryessa needs no introduction to residents of Solano, Napa and Yolo counties. This is where many get their water and take day trips to swim, water ski and fish.

What they may not know is that the lake was once the site of a small but thriving unincorporated community of Monticello. It was a town that was a hub of agriculture and home to one of Northern California’s biggest rodeos, until it was abandoned to make way for a reservoir that gave way to the Monticello Dam and Lake Berryessa.

The history of this community is the subject of “Remembering Monticello”, an exhibition at the Winters Museum which opens on April 7.

Woody Fridae, president of the Winters Historical Society and curator of the exhibit, said the museum had wanted to do an exhibit on Monticello for a few years, and the opportunity arose when he received artifacts from a Spanish Flat Village Center museum nearby. Shortly after the building survived a brush with the 2020 LNU Lightning Complex fires and lost its lease, the landlord donated its Monticello artifacts.

“We kind of inherited their collection,” Fridae said.

Monticello’s story began in 1843 when Jesus and Sisto Berryessa received a land grant in what is now Napa County from Governor Manuel Micheltorena when California was still a territory of Mexico. The Berryessas were ceded over 35,000 acres near Putah Creek.

However, Fridae said the Berryessa brothers were big players with a lot of debt and had to slowly sell off pieces of their land.

“By the 1860s they had played it all,” he said. “They sold it to a developer who then divided it into parcels and started selling it.”

One of these plots became the town of Monticello, which attracted farmers due to its temperate climate, prompting them to grow wheat, fruit, hay and other crops. By the 1870s it had grown into a full-fledged community with a general store, blacksmith’s shop and cemetery.

Later facilities included a nine-hole golf course, a billiard hall, a tavern which hosted live music, 76 gas stations, and the rodeo which was established in 1920 and drew up to 1,500 attendees each year.

Scenes of life at Monticello in those carefree days before the dam were captured in photos of the Muller family, which will be on display at the museum. These color photos show people dancing, a naval officer returning home from World War II, teenage girls riding bicycles down the street, people playing pool, swimming in Putah Creek, and students taking the bus to go to Winters High School.

“These speak of a valley that was full of life and had its own unique characters who went about the day-to-day business,” Fridae said.

Unfortunately, those moments were not to last. In 1947, the United States Bureau of Land Reclamation partnered with Solano County for a reservoir that would supply water to 96,000 acres of farmland in the area. This project would prepare the ground for Lake Berryessa and also included the construction of the Monticello Dam.

The project was widely opposed by the residents of Monticello. Fridae said he designed a pamphlet and sent it to Congress to encourage them to resist it. Their goal was to emphasize that Monticello was a vibrant town with an active agricultural economy and a busy annual rodeo and even suggested an alternative plan with a smaller reservoir that would not damage the town’s fertile lands. However, he said the effort died because of the lengthy bureaucratic process and California’s determination to move forward.

“The state ultimately said we were going to provide a better quality of life for more people by building this dam than the negative effects of harming the quality of life of a few hundred,” he said. “That argument, I guess, won the day.”

Monticello had about 250 residents when construction of the dam began in 1953, and many had moved out by the summer of 1956, sometimes moving their entire homes in the process. The cemetery, including all of his headstones and bodies, was moved to Spanish Flat, and the remaining residents were evacuated in 1957 with the completion of the dam. The remaining structures were demolished.

Most residents moved to Winters, while others moved to Napa and Solano counties. One family – the McKenzies, who operated the McKenzie and Sons General Store – moved to Vacaville to establish what later became Pacific Ace Hardware on Merchant Street. The store is still run by descendants of the McKenzies, and Dave McKenzie even contributed photos to the exhibit.

Monticello’s final year, including the move, was documented by photojournalists Dorothea Lange and Pirkle Jones for an article for Life magazine which, for unknown reasons, was never published. However, some photos were published in Jones’ “Death of a Valley” photo essay and others were held by various universities.

Black and white photos of Lange and Jones, some of which have not been published anywhere, will be featured in the exhibition alongside Muller’s photos to provide contrast to the cheerful color photos.

“These photos (of Lange and Jones) are all very artistic, professional, high quality, dramatic and have a very dark nature to them,” Fridae said.

The photos depict the final harvest of fruit, the moving of the cemetery and general sadness among the residents.

Fridae described the photos as “prescient” and “documenting the last part of life” at Monticello.

Some Monticello residents are still alive, and Fridae hopes to have some for a private party earlier today, as many are now in their 80s and 90s and may not be as likely to attend the party.

Overall, Fridae hopes visitors will leave with a sense of history and believes the exhibit will have greater appeal beyond winters or even surrounding communities.

“At one time there was an amazing little community a few miles from here that no longer exists,” he said.

“Remembering Monticello” will have its grand opening at 7:00 p.m. on April 7 at the Winters Museum, 13 Russell St. After that, the exhibition will be open to the public from 1:00 p.m. to 5:00 p.m. Thursday through Sunday from April 8. The exhibit will be on display for four or five months, depending on popularity, Fridae said.