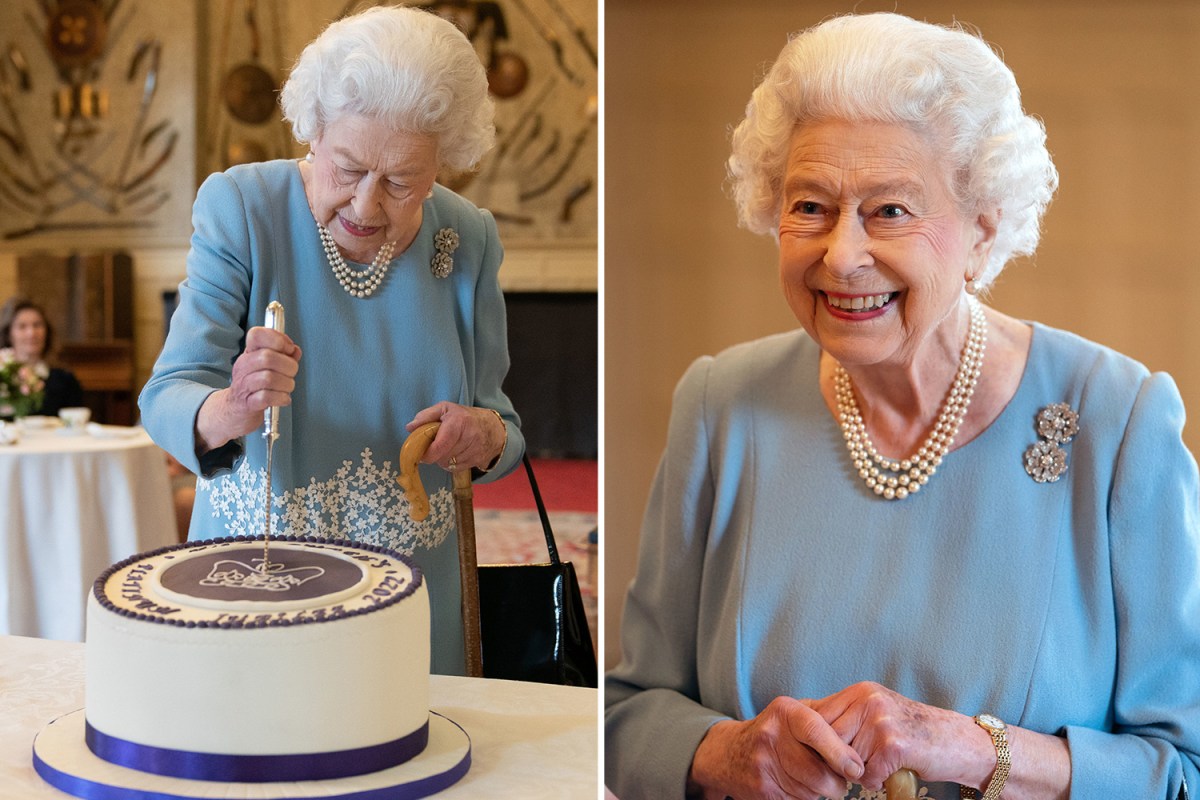 THE Queen showed she was still the royal icing on the cake today as she cracked jokes at a tea party celebrating her 70 years on the throne.

Her Majesty, 95, was in ‘sparkling’ form as she met members of the Women’s Institute and local charities in Norfolk on the eve of her joining.

Tomorrow marks the Queen’s Platinum Jubilee with celebrations taking place across the country.

The monarch was just 25 when she began her reign after the death of her father, King George VI.

She is now the longest reigning and longest living monarch in the history of our country.

The Queen wore a stunning powder blue Angela Kelly dress embellished with a pattern of white flowers as she beamed at the reception in the Sandringham ballroom.

She appeared in high spirits and joked with guests while cutting a cake specially baked by a Sandringham local to celebrate the event.

When told that the cake had been spilled for the benefit of the photographers, she joked, “I don’t matter?”

The Queen also left her guests laughing as she told them “I’m going to put the knife down, see if it works” before adding, “Somebody else can finish it.”

She looked comfortable as she clutched her black purse and used a wooden cane during the event.

There were throwbacks to her coronation in 1953 – with the Queen presented with a bouquet that included flowers from her bouquet as she took the throne.

🔵 Read our Royal Family live blog for the latest updates

Her Majesty is President of the Sandringham Branch of WI and Vice President Yvonne Browne said of the monarch: “She looked brilliant, she was in sparkling shape and we had a good chat about what we have and haven’t done during Covid.”

Harry Humphrey – Mayor of Kings Lynn – then presented the Queen with a loyal address and Platinum Jubilee mosaic created by Norfolk schoolchildren.

Her Majesty was also treated to a series of ‘Congratulations’ performed by the Hunstanton Concert Band.

The event was the largest in-person public engagement the Queen had attended since before her recent health crisis.

She usually spends the anniversary of her accession to the throne in private but this year made history with the afternoon tea.

The occasion will be more poignant for the Queen this year as it is her first without Prince Philip following his tragic death last April.

She travels to Sandringham every year to mark the event and is expected to stay until the end of the month.

During the event. the queen stopped to chat with a group of former Sandringham Estate employees and said, “I haven’t seen you in a very long time.”

Recalling the devastating 1953 floods that hit Norfolk and surrounding counties, she said: ‘I remember sitting down to dinner, the fire alarm went off, no fire, the sea was coming in.’

She added, “It’s a very unpleasant experience, you go to the top of the (sea) wall and it’s there,” and she raised her hand to her face as if to indicate sea level.

The Queen is believed to have stayed at the Duke of Edinburgh’s cottage, Wood Farm, in Sandringham, and she said her late husband ‘loved it’ and part of its appeal was because ‘the sea was so close”.

Sandringham is where her father died, aged 56, in 1952 while she was vacationing with Philip in Kenya.

She was crowned at Westminster Abbey the following year.

Britain will mark the Queen’s 70 years on the throne with a four-day public holiday in June.

It came after the palace released a touching video of the monarch petting her pet Dorgi as she read cards and keepsakes.

Do study disciplines have to align with the labor market to be relevant?