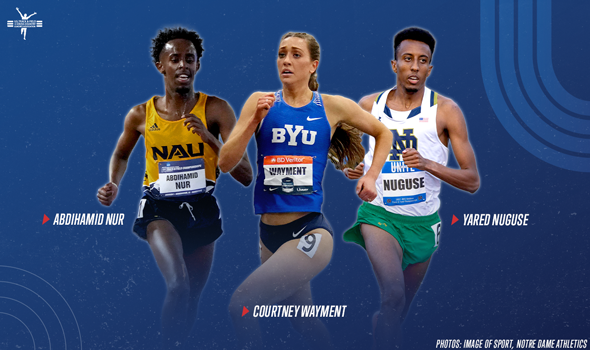 That’s how long Henry Rono has held the college record for the 5,000 meters.

The same could be said of Eliud Kipsang in the 1500 meters.

Both of those records could be in jeopardy tonight at the Sound Running Track Meet: Rono’s 1:08.4pm, set April 8, 1978, in a tri-meet against Arizona State and California; Kipsang’s 3:33.74, set less than four weeks ago on April 15 at the Bryan Clay Invitational.

From the USTFCCCA information area: Meetings & Results | Folders and Lists

Age before beauty, but when it comes to Rono’s former world record in the 5,000 meters, it’s as old as it is magnificent. A week after covering the same distance in 13:22, Rono broke away from the peloton halfway through and picked up the pace. With one lap to go, Rono only had to complete the final lap in 64 seconds to claim the world record, but sprinted home in 59.6 seconds to demolish the previous all-time record of 13 : 12.9 per 4.5 seconds. It was one of four world records set by Rono in the space of 81 days.

Eight years and a week to the day after Estrada played in the Payton Jordan Invitational, a trio from northern Arizona – led by two-time NCAA indoor champion Abdihamid Nur – will compete in the absolutely stacked OAC men’s 5000m at 10:40 p.m. HEY. Nur, Drew Bosley and Nico Young are expected to line up alongside European record holder Jakob Ingebrigtsen, 17-time NCAA champion Edward Cheserek and consecutive NCAA cross-country champion Conner Mantz, among others. Meet organizers said the plan for the race was to go ahead at 1:10 p.m.

Nur finds himself in a better position, comparatively, to Estrada and Teare before their openings at Rono’s record. The current NAU standout has a 5000m PR of 13:19.01, set in a winning effort at the NCAA Indoor Championships in March. Estrada and Teare were at 13:26.94 and 13:20.24 respectively. Estada and Teare made their marks on the outside.

Yared Nuguse proved he didn’t need competition to break records last year. After all, Nuguse set the old collegiate 1,500-meter record of 3:34.68 in a solo effort during the ACC Championships preliminaries (Kipsang has since surpassed Nuguse’s time). When challenged, Nuguse led the way indoors this year with a college best of 7:38.13 in the 3,000m and a PR in the mile of 3:54.46.

Not to be overlooked, two athletes to watch in the Coros women’s 5000m at 10:20 p.m. ET are Roisin Flanagan and Courtney Wayment. Flanagan is the event’s NCAA DII record holder at 15:28.41, while Wayment has demonstrated great reach this year with all-time top-10 collegiate marks in the 3000m and 5000m indoors, as well as steeplechase. If Wayment were to challenge the 13-year-old collegiate record of 15:07.64 set by 2009 The Bowerman winner Jenny Barringer (now Simpson), it would take a PR of over eight seconds. Barringer’s closest record since 2009 was Aisling Cuffe’s 15:11.13 this weekend eight years ago.

Method Man releases "Come Get Some" for "Evil Dead: The Game"