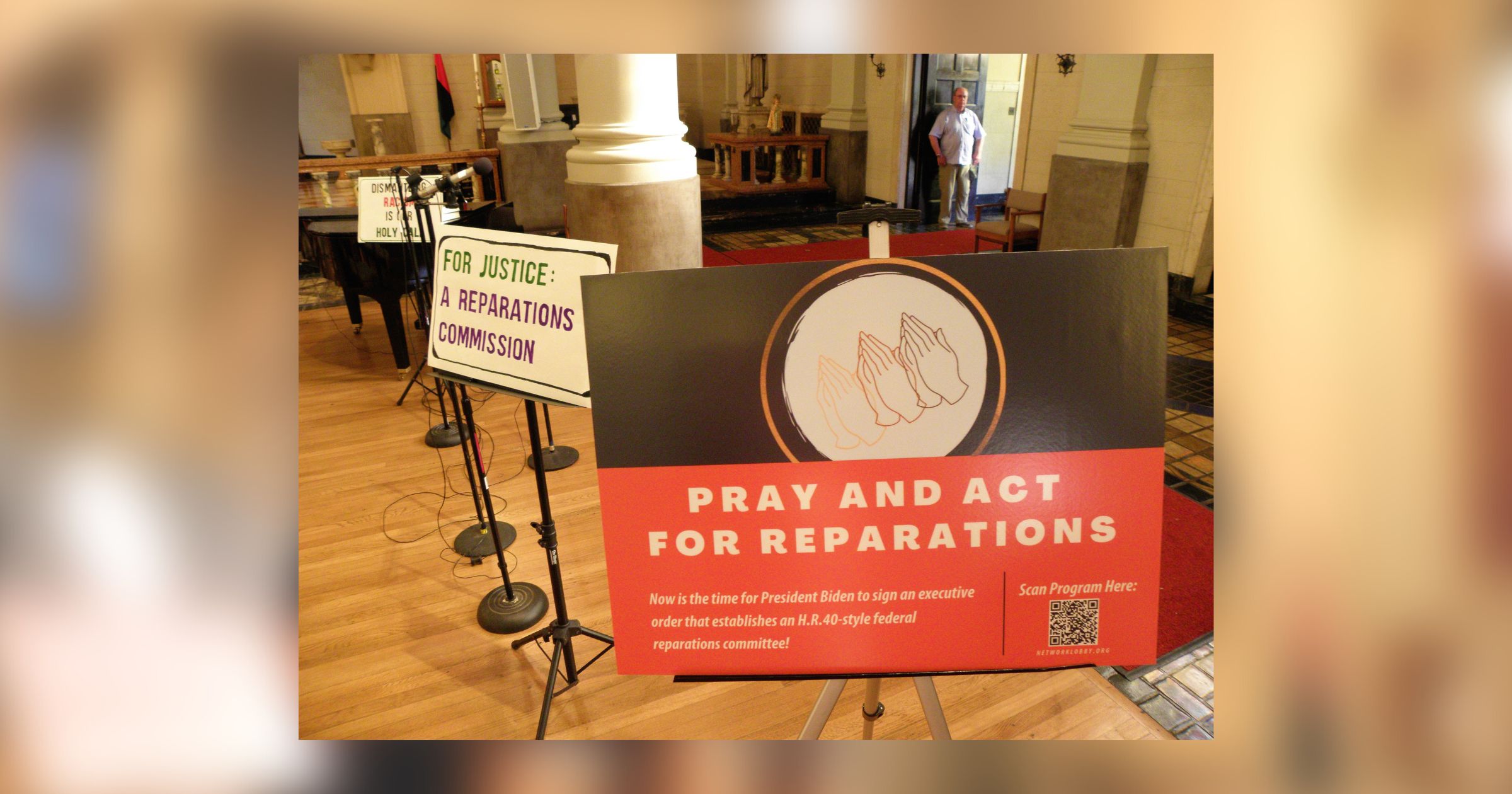 A coalition of religious activists wants to build on the June 19 holiday in the United States.

This year, only the second to mark June 16 as an official holiday, its members are urging President Joe Biden to take action that will focus more heavily on the legacies of slavery and racism.

Of jointly signed letters to Biden From a June 15 vigil at a Cleveland church to a June 16 press conference near the White House, faith groups — and secular partners — are pushing Biden to use his power. They want him to issue an executive order to explore reparations.

The order would create an “expert commission” like the one called for in a bill languishing in the US House of Representatives. HR 40the “Commission to Study and Develop Remedial Proposals for African Americans,” was introduced over a year ago.

“June 16 as a federal holiday does not mean reparations,” said the Reverend Marvin Silver, associate minister of the United Church of Christ Conference. Mid Atlantic Conference, who attended DC’s press conference. “President Biden must go further and act on this request now. A task force is a crucial next step on the road to reparations for people of African descent in this country.

“In this highly charged and tense political environment and hate-filled culture, today’s event is a bold statement in the long fight to ‘let justice roll’.”

Calling themselves the ‘Why We Can’t Wait Coalition’, activists say they’re holding Biden against him campaign promises to “support a study of the continuing impacts of slavery” and “a study of reparations”.

At their June 16 press conference near the Elipse near the White House, and in an earlier letter, they said the executive order was urgent.

“Many of the racial disparities that plague this country and divide Americans from one another are unnecessary and can be eradicated if we address the lingering legacy of slavery,” they wrote. “By righting our wrongs, we can ensure that all families in the United States have a fair chance to own land, buy a home, enjoy good health, and live without fear for the future. .”

“Like the federal commission that investigated the forced resettlement and wrongful incarceration of Japanese Americans during World War II,” they said, “an HR 40-style commission can help pave the way for a critical and truthful assessment and taking into account past damage and the present misdeeds that result from it.

“Juneteenth,” they wrote to Biden, “offers you an important opportunity to commemorate the end of slavery while recognizing that much more needs to be done to create equity and real opportunity for African-Americans. Americans in the United States, Beyond Declaring a National Holiday.”

The Reverend Traci Blackmon, deputy minister general of UCC, speaking at the June 15 ecumenical vigil in Cleveland, used the story to invoke the urgency and depth of the call. Entitled “Reparation and Reparation: A Prayer Vigil for Reparations,” it drew some 70 people to St. Aloysius and St. Agatha Church in the Glenville neighborhood.

“This country has yet to atone for the atrocities inflicted on generations of enslaved Africans and their descendants,” Blackmon said. And just officially speaking about it, she said, would be an important first step. She named the mythologies of white supremacy that have “clouded our discussions of the impact of chattel slavery and made it difficult to establish a national dialogue about how to fully account for slavery in history. and American public policy”.

She detailed how “racial disparities in access to education and health care, housing, employment and other social goods are directly attributable to the damaging legacies of slavery and racial discrimination”.

“HR 40 aims to create the framework for a national discussion on the enduring impact of slavery and the consequences it has had,” she said. “He is meant to begin the necessary process of atonement.”

Blackmon invited anyone in the audience to give a definition of atonement. “To do things right,” was a response. “To make things right,” Blackmon repeated. “To begin the repair. To go back to being a whole.

She recounted U.S. General William Sherman’s 1865 promise to distribute 40-acre tracts of formerly Confederate land to former slaves. ‘This plan represented the first systemic form of reparations for freedmen,’ she said – although the order was later rescinded and ‘the promise of reconstruction proved short-lived’.

And in the decades that followed, she said, black people experienced the opposite of reparations. “Segregation, redlining, the war on drugs, mass incarceration, racist policing over and over again, underfunded schools, minimum wage jobs – all of these are iterations of the racism we don’t have. not faced as a people.

“And most of the time the conversations in the United States are directed towards the people who have been wronged, instead of the people who have amassed wealth on the hands and bodies and the sweat and sacrifice of people whose generational ability to take care of themselves were attacked.

A formal study commission could help fix that, Blackmon said. “We ask for fairness in the conversation. The unemployment rate for black Americans is more than double that of white Americans. Black families have only 1/16th the wealth of white families. Similar numbers are evident in American cities, such as St. Louis, where Delmar Boulevard separates predominantly black neighborhoods from white neighborhoods. “There is a 26-year lifespan difference between a white man’s life on the south side of Delmar and a black man’s life on the north side.

“It’s not just a question of money. It’s about saving lives, saving a legacy, saving history and, dare I say it, saving souls.

Organized by the Network, the Cleveland vigil featured messages on T-shirts such as “nuns against racism” and “Catholics for racial justice.” And he was filled with prayers for justice.

“More than 400 years of racist policies, laws and practices have denied black people equal access to participation in our common cultural, political, social and economic life,” said Sister Eilis McCulloh, Network’s Popular Mobilization Fellow, at the start of the vigil. “The sinful legacy of white supremacy and the persistent racial wealth gap must no longer deprive black people of good health, education and economic outcomes.

“The creation of a Federal Reparations Commission in the United States is a central way to name, understand and address our past and to rebuild. Now is the time.” The printed program listed a phone number and website where people could encourage Biden to sign an executive order by June 19.

Humility was also a theme. In a litany of prayers of petition, those attending the vigil asked for forgiveness for “the moments I have”:

And they asked for “the courage to commit ourselves to repairing and repairing the legacy of racism in our city, our state and our country”.

“The truth is, these conversations have to start right where you start — in the church,” Blackmon told the rally. “Because at root, what we are dealing with is sin. And sin is what the Church is called to tackle.

“Unless this country reckon with its racism,” she said, “it will continue to perpetuate itself from generation to generation.”

“Reparations are about the church, people and society moving from charity to justice,” she concluded. “Moving from document to hand. Going from just offering to give someone a fish to giving them access to the lake so they can fish on their own. This is not what we implore. This is the payment that is due to us.

Content on ucc.org is copyrighted to the United Church of Christ National Framework and may be shared only in accordance with the guidelines outlined here.