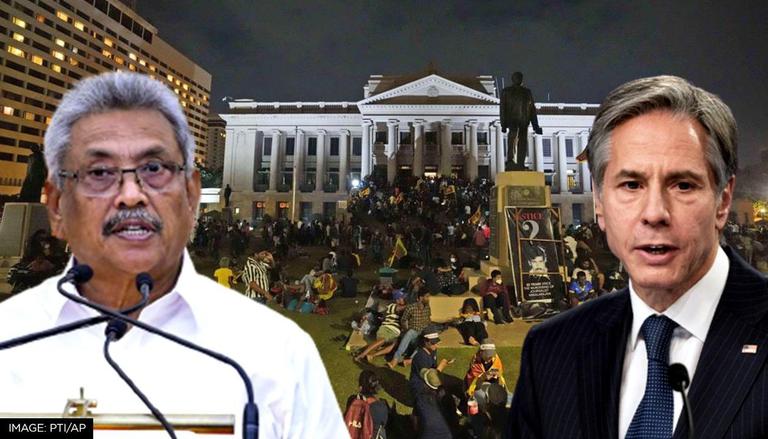 As Sri Lanka experienced political turmoil on Saturday, leading to the resignation of Prime Minister Ranil Wickremesinghe, the United States called on government leaders to act quickly to seek long-term solutions. According to TRT News, the remarks by State Department spokesman Secretary of State Antony Blinken came during his July 9 visit to Thailand. Blinken, spokesman for the State Department, said the resignation of President Gotabaya Rajapaksa should be accompanied by a commitment to the betterment of the nation and added that the decision should not be aimed at ensuring the profit of ‘a political party.

After landing in Thailand on Saturday, Blinken called on the outgoing government to quickly form a new government in accordance with the constitution to address the concerns of Sri Lankan citizens who have been facing a serious crisis for six months. Blinken stressed that the main focus of the next government formed should be focused on providing electricity, energy and food to its citizens. Additionally, the US Secretary denounced the attacks on journalists and demanded a fair investigation and prosecution of anyone involved in the violent protest. He noted that the people of Sri Lanka have the right to peacefully raise their issues and called on citizens to end the violence in order to restore peace to the island nation.

On Saturday, following a massive protest at the official residence of President Gotabaya Rajapaksa, Ranil Wickremesinghe called a meeting with the President where the ministers asked the Prime Minister and the President to step down in order to control the situation immediately. In television footage, it showed hundreds of people inside the well-fortified house and on the grounds outside, some bathing in the garden pool and others in a jubilant mood. Subsequently, the Prime Minister tendered his resignation under certain conditions. He urged ministers to form a multi-party government to address the concerns of all leaders. Furthermore, he also urged the leaders to quickly form the government as meetings with the International Monetary Fund and the United Nations World Food Program (WFP) are underway.

The island nation is experiencing the worst economic crisis in its history. The country has huge debts and dwindling foreign exchange reserves, and is struggling to pay for its imports, causing a shortage of basic necessities. Citizens were forced to wait in long lines for fuel, cooking gas and medicine.