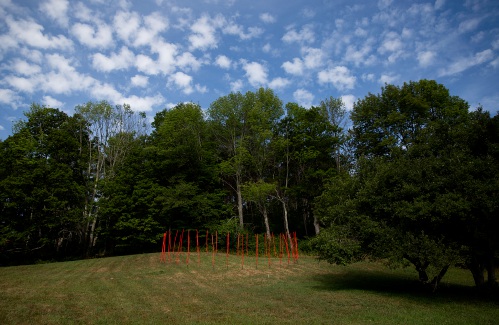 A surreal spider woman greets visitors to this year’s edition of Sculpturefest, the annual outdoor exhibit on the property of Charlet and Peter Davenport in Woodstock. The sun-spotted spider was located under a tall willow tree and presided over the entrance to the park. The artwork is by Sande French Stockwell Tribute to Louise Bourgeois (2019), and it is constructed from a combination of materials: rebar and wire form the legs, while the body and face appear to be sculpted from painted fiberglass.

The face of the spider is the effigy of the sculptor Bourgeois (1911-2010). It’s a fitting tribute to an artist who is known for her Moma series of monumental bronze spiders that have appeared in public spaces across the United States and abroad, including in Hanover several years ago outside the Black Family Visual Arts Center in Dartmouth.

While the Davenports obviously have a deep affection for art (they’ve been hosting Sculpturefest for over 30 years), they’re equally invested in sharing their land, which, according to a statement on their website, “belongs to us all “. ”

It can take a while to settle into the idea of ​​wandering around someone’s property unaccompanied. There was a part of me that felt like someone at any moment could shout, “Hey! What are you on my property!” But that worry faded as I continued down the driveway and looked to my left, toward a grassy hill, and saw a variety of shapes – some strange, some familiar – inhabiting the landscape. Some seemed to have been there since the dawn of time while others revealed themselves to be more contrasting: flashes on the horizon: a kneeling figure, blue and yellow flashes, a rotating steel pivot that glistens in the sun.

Anyone, regardless of their background in art, can glean something from visiting the Prosper Road site. A visit to Sculpturefest is both a nature walk and an artistic adventure. Art lovers like me might notice that the selections seem to take you on a little mini-tour of the evolution of sculpture. For example, Amanda Ann Palmer’s simplified triad shapes sisters recalls Paleolithic totemic figures, which play nicely with the sinuous silhouette of Barbara Kaufman’s ironic title Sharon Stone, a classical female figure that alludes to the pure, naturalistic beauty of Hellenistic statuary. As a counterpoint to these, a selection of chrome modernist kinetic works by Blaze Konefal are spread across the site.

But even without an art-historical frame of reference, the sculptures are, in and of themselves, a lot of fun to discover. Each played on the textures and contours of the surrounding environment. Grass Ferris dance of ideas (reminiscent of two massive, fossilized mammoth tusks) frames a view of the hill. The graceful contours of the two serpentine pieces of weathered driftwood create arabesques that cross the landscape.

by Jay Mead Red lines is a large circle formed by a row of post-shaped vermilion branches. The towering loop is monumental without being imposing. Despite its high color scheme, it somehow works with the undulating treeline and gently rolling terrain.

I walked around the work several times, tracing the red spindles with my gaze while negotiating the slope on which it is installed. When I looked beyond the room, into a grove of tall trees, the trunks seemed to glow purple. It was a magical example where the sculpture changed (at least perceptually) the color of the landscape. Whether intentional or accidental, this type of activation is precisely what makes the experience of art in the flesh so exciting.

The most beautiful and tender moment happened when I walked through an opening in a thicket and emerged into a sunny glade where a bear, a rainbow flying fish and a host of figures various welcomed me. The whimsical curation evoked a genuine sense of delight, as if I had stumbled upon a gathering of mythical creatures.

The Bear was a work by Liz Fletcher titled Passaconaway, which is basically a mask-like bear head on a pedestal and located at the entrance to the clearing. Its location at the threshold of this part of the property gives it the presence of a benevolent caretaker. A row of fish painted in rainbow hues hung from a wire suspended across the diameter of the clearing, making them appear to be swimming through the air. This work, by Charlotte Donaldson, has been aptly titled Who said fish don’t fly. Sometimes art takes itself too seriously, and it was refreshing to see an exhibition that embraced levity and playfulness.

A sense of generosity and caring pervades the exhibition, as one indulges in a pure aesthetic experience while surrounded by the splendor of nature. You can sense that the Davenports really want you to explore the farthest corners of the earth as you are guided by the carvings and various art objects that are so lovingly preserved in the landscape.

Sculpturefest is located on Prosper Road in Woodstock. It is open daily from dawn to dusk until the foliage season. For more information, visit www.sculpturefest.org.

Eric Sutphin is a freelance writer. He lives in Plainfield.

Discovery of a new method of treatment with a drug against cancer? and more Latest news here