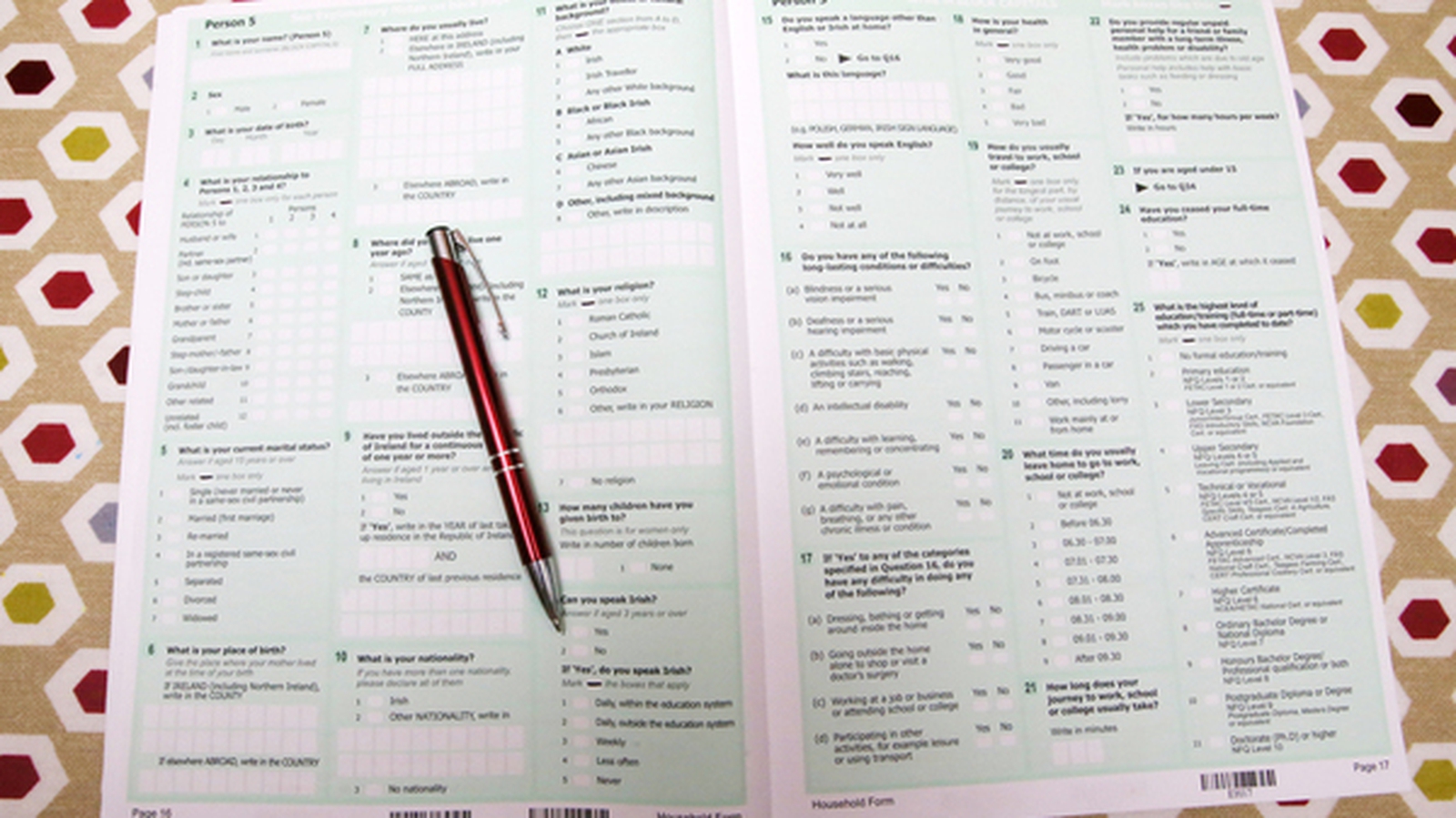 Analysis: Census results allow the government to plan public services, but they are also a key source for understanding past lives

Over 2 million forms have been delivered across Ireland over the past month – one per household – in time for Census Day today. This year the Central Bureau of Statistics (CSO) added a “time capsule” section to the form. Unique to the Irish Census, this allows for the inclusion of a personalized message which, like the rest of your census data, cannot be made public for 100 years.

Census data provides government with a demographic foundation for planning public services, but it is also a key source for understanding past lives. Irish censuses were carried out regularly since 1821. This was initially on a decennial basis, although no census was taken in 1921 due to the Revolutionary War. The census was canceled in 1976 for economic reasons and more recently the 2021 census was postponed to 2022 due to the pandemic. Whether issued in 1821 or 2022, the forms are highly structured documents allowing easy analysis of the data.

From the RTÉ Archive, Brendan O’Brien. reporting for RTÉ News on the 1981 census

Early censuses were completed by hand, with enumerators following guidelines that, in theory, meant consistency in reporting. In 1981, the system was more automated. Rather than handwriting the responses in full, individuals responded by selecting boxes, meaning the results could be “computer punched”. Today’s censuses show additional refinement. After collation, the forms are guillotined, scanned and converted into readable data using Optical character recognition. The information is coded in a computer system after which it is analyzed.

Since 1821, aggregate census data have been compiled in census reports. Historians use this information to understand demographic trends such as population size and structure, literacy levels, and occupational trends. Although census reports survive, the only fully extant manuscript censuses before independence are those of 1901 and 1911.

Census questions can reflect changing social attitudes and concerns. The 1841 census was the first to include questions on literacy (the Irish national school system was established in 1831). In 1851, individuals were first asked if they spoke Irish, English or both. The 1911 ‘Fertility’ Census asked women how many live births had occurred in their current marriage and how many children were still alive. It also included indelicately worded questions about disabilities. This year, new questions reflect some of our current concerns, such as renewable energy, internet access, working methods and childcare.

From the RTÉ Archive, Mary Fanning reports for RTÉ News on the launch of the 1986 census

An ongoing problem with having a standardized set of answers to census questions is that some people cannot fully represent themselves. Researcher and activist Karen Sugrue pointed out that non-binary people cannot register their gender identity in the 2022 census, while historian Hussein Omar sees the list of tick-off responses to the question on ethnic origin as problematic. Omar notes that Arabic is a language and not an ethnicity. Similarly, the ethnic list understand nationalities and geographical descriptors such as “African”.

Until the 1981 census, only a husband could be described as head of household, reflecting perceived attitudes towards women. “Divorce” was a option for the first time on the 2001 census, following the introduction of the legislation in 1996, while 2016 saw the inclusion registered same-sex partnerships.

Despite the constraints of the census form, people often managed to personalize their statements in some way. Taking the category “profession” as an example. In 1911, the father of one-year-old Bridget Cronin described her occupation as ““bold” petwhile infant James Geddes was a ‘nuisance at night’. A father described his toddler’s occupation as ‘child’s play’ in 1901. These humorous entries provide insight into family relationships in the past.

The census has also been used to convey more serious messages. Unable to vote in the 1911 census, some women expressed defiance by refusing to fill out the census while others like 63-year-old Frances Flynn describe themselves as “suffragist”. Completing the census in Irish was, in some cases, a political statement. Pádraig Pearse’s 1911 census was completed in Irish, reflecting his nationalist views. A more recent depiction of the challenge to church/state power is the 2,000 people in 2016 who declared themselves members of the Jedi religion.

The addition of the Time Capsule gives everyone the opportunity to express themselves. I asked the Twittersphere what topics they were thinking of including in the Time Capsule.

Thus, followers of #IrelandI am interested to know what kind of information you are going to include in the #Time capsule section of your census report. What do you think people will want to know about us 100 years from now? #IrishHistory #IrishFamilyHistory #Census2022 https://t.co/0ypp8Bn8VG

One idea is to record what they do on April 3 as an ordinary day in 2022 will likely be of great interest to social historians of 2122. Genealogists have indicated they would include a family tree, DNA details or a summary of the complex relationships in their generation.

While ethnic groups such as the Minceir/Irish Travelers are included in the census form, the Time Capsule is an opportunity for them to tell their story, their history and their culture having been excluded in areas such as the school curriculum. Rosemarie Maughan, Mincéir activist said she would write about “the oppression of Irish Travellers, the only indigenous ethnic minority in Ireland, as our history has never been recorded”.

Others will include a potted autobiography, explaining why they made certain decisions in life. Some of those who have been bereaved since the last census will use the time capsule to commemorate a loved one.

On RTÉ Radio 1’s Today With Claire Byrne program, what do you write about the census time capsule?

A more macro approach is popular with many, such as a current snapshot of Ireland, depicting both the positive aspects of life and current issues like housing and the healthcare system. Globally, environmental issues including biodiversity and climate change were mentioned frequently – some wanting to apologize for our treatment of the land. Current events such as the pandemic or the invasion of Ukraine are also at the heart of concerns. Some people have decided not to write anything, which in itself is a form of expression.

Just as the field of history is vast, encompassing everything from family history to political history to environmental history, the remarks in the time capsule will also be varied. But whatever you decide to write, you can be sure that a historian 100 years from now will thank you for your contribution.

The author is a postdoctoral researcher on the Irish Research Council-funded Death and Burial Data: Ireland Project 1864-1922.