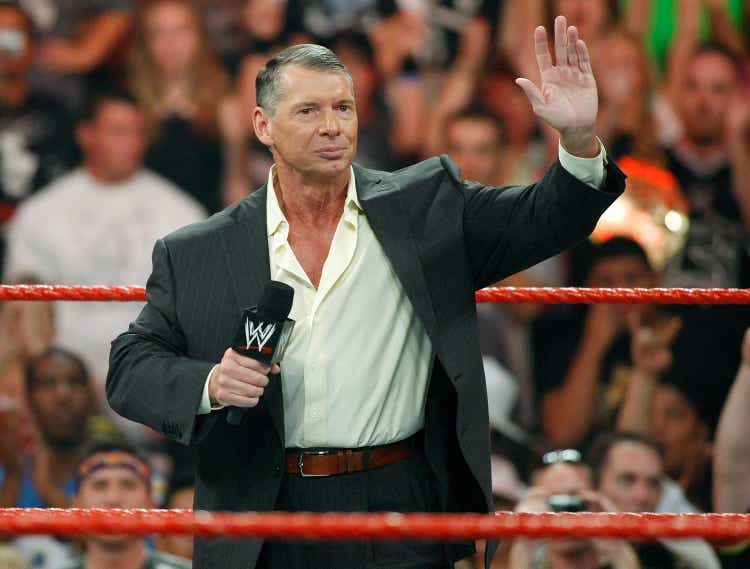 World Wrestling Entertainment, Inc. (NYSE: WWE) is enjoying a moment amid positive headlines after last weekend’s annual flagship event “WrestleMania 38” broke revenue and attendance records for the company. It’s been quite a turnaround for WWE which has faced significant disruption during the pandemic, limiting live event production as well as lower ratings. Indeed, shares of the stock have surged this year, climbing more than 25%, underscoring the more positive outlook and new mojo.

Love it or hate it, the reality is that WWE’s professional wrestling brand boasts a loyal and vibrant fanbase that the company has been able to leverage into a highly successful business model. We are bullish on the stock which appears to be on the way out and likely has more potential as earnings momentum picks up going forward.

The story with WWE has been an operational turnaround amid post-Covid “reopening” dynamics. The latest reported quarter covering Q4 2021 was the first with a more normalized schedule hosting 48 events in North America, compared to zero the previous year and 50 in Q4 2019. While the international segment has been slower to restart, the configuration in 2022 is a return to business as usual.

The result was a strong recovery in financials with fourth-quarter 2021 non-GAAP EPS of $0.70, up from $0.24 in the year-ago period. Revenue of $310 million in the fourth quarter was up 30% year-over-year, reaching $1.1 billion for all of 2021. Remember that more than 83% of total business is related to media content licensing agreements on broadcast and cable television.

As of March 2021, Comcast Corp.’s “Peacock” streaming service. (CMCSA) NBC Universal is the exclusive home for WWE content online. Within the media group, the company also includes a separate agreement with Fox Corporation (FOX) which covers weekly events like “SmackDown”. The point here is to say that these deals have been very lucrative and are still part of the bullish thesis for WWE stocks.

Regarding the NBCU partnership, the company notes that Monday Night Primetime programming of “Raw” on Peacock averages approximately 1.7 million weekly viewers, beating cable and primetime viewership trends. in the category. The latest data from WrestleMania with 156,000 attendees reported as the highest-grossing event in company history shows the brand is alive and well.

In terms of guidance, WWE uses the (OIBDA) metric which is a measure of profitability before amortization and excludes stock-based compensation and other non-recurring material items. Management is targeting OIBDA 2022 at between $360 million and $375 million. If confirmed, the mid-term estimate represents a 12% increase over 2021 and also 100% more than the 2019 result of $180 million as a pre-pandemic benchmark. In other words, WWE is more profitable than ever, thanks in part to its media deals.

We like the price action for WWE shares that have topped $60.00 and are trading near the highest level since 2019. The bullish case here is that strong operating trends through 2022, including sales of tickets to live events, can allow the company to exceed expectations.

Although no date has been confirmed, we believe the next Q1 earnings report, likely later this month, could be a catalyst for stocks to move higher. One thought is that the buzz surrounding the latest WrestleMania event could boost fan engagement for upcoming events, adding to revenue trends and upward reviews.

According to consensus estimates, the market expects 2022 revenue to reach $1.3 billion, up 15% from 2021. The market expects 2022 EPS to approach $2.49 while trending toward $3.19 by 2024. interest rates, as well as opportunities for international expansion, add an additional edge to these estimates. We envision WWE trading at a forward P/E of 25x, which we believe is a compelling valuation given its differentiated leadership position in this entertainment niche.

We rate WWE as a Buy with a price target of $81.00 for the coming year, implying a multiple of 30x on the current EPS 2023 consensus. The way we see it playing out is that a string of positive quarters in the future may be enough to cause some upward revisions to market estimates, making the stock look cheap at the current level. Ultimately, the deal with Peacock is beneficial for both companies and particularly positive for WWE as it provides increased brand exposure to a new group of viewers generating underlying demand for the content.

A key risk would be the possibility of weaker-than-expected earnings that would force a reassessment of the earnings outlook. Monitoring points for the remainder of the year include operating metrics such as TV ratings, event attendance and OIBDA trends.

Bou and Marcelli return to Sant Jordi in top form